Don't use plagiarized sources.
Get Your Custom Essay on Truth vs. Lying Essay Just from $13,9/Page

Perhaps it would be easier if we all just lied.

There are advantages and disadvantages to telling the truth. An advantage to telling the truth is being able to talk about things without fear of ramifications. For example if you are in the Principal’s office and the Principal is asking you what happened and if you tell the truth then you are able to talk about it without fear of the ramifications. A disadvantage for being honest would be the ramifications if you saw your friend stealing and told the truth you might lose your friendship.

Another advantage is that if you know something about your friend but it might hurt their feelings then if you lie about it then you do not hurt your friend’s feelings like in April Raintree by Beatrice Cullenton when April les to Cheryl to avoid hurting her feelings. Another disadvantage of being dishonest would be that if you lie to somebody and then they find out you lied you might lose their friendship. A final advantage of lying is that if you know something confidential telling the truth would reveal the secret thus it would be better to lie about it.

As shown by these examples we can see it is more advantageous to be dishonest than disadvantageous. One might tell you that being honest is the way to go. However as shown clearly by the examples presented in this essay we can make the deduction that this is not the case. It is clearly demonstrated that being dishonest is the better option because there are more disadvantages to being honest and more advantages to being honest. In my thesis I asked would the world be better off if we all just lied would it be simpler maybe but I leave that up to you. 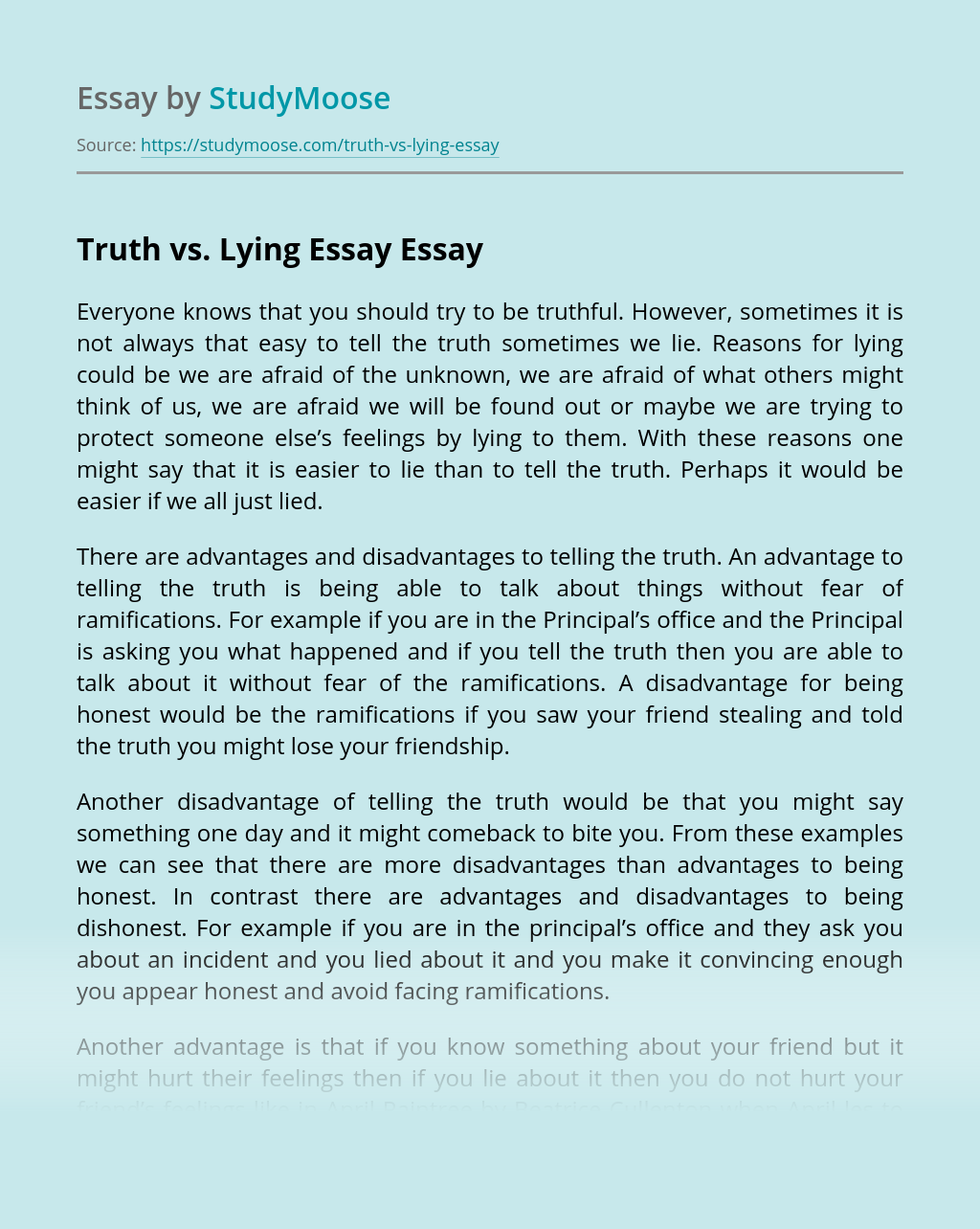 View sample
One Lie Leads to Another Lie

A lie is like a bacteria. It multiplies fast. One lie leads to second, second to third and so on. A person then forgets where he started the lie and where it is going to end. He finds himself in a vicious circle of lie, from where there is no way out. There is a... VIEW ESSAY

White lies are not acceptable in business or anywhere else for that matter. Telling a lie, either a grave lie or white lie, contradicts the absolute of truth, therefore making it wrong. Many people view white lies as harmless or innocent, but what they do not realize are the potential consequences of even a small... VIEW ESSAY

Lies are present in lives of all of us. Everybody are lying. Although each human lies for them own purposes. Our lives would be difficult without them. These are two kind of lies: good and bad. The first type of lies are good lies. People are lying to save face or to maintain them reputation.... VIEW ESSAY