In Walter Dean Myer’s story The Treasure of Lemon Brown a teenager named Greg meets Lemon Brown and shows him a lesson about what is truly valuable in life. The theme of this story is “Everyman has a treasure” (Pg. 475). When Greg finds out about Lemon Brown’s treasure he automatically thinks of something value in money not something emotionally value. But Lemon Brown teaches him that everyone has some kind of treasure and that it doesn’t have to have money value.

Don't use plagiarized sources. Get your custom essay on
“ Treasure of Lemon Brown Paper ”
Get custom paper
NEW! smart matching with writer

The story begins with Greg leaving his house from having an argument with his father about how his grades aren’t great. Greg was running away from his problems. Greg walks around when it starts raining and goes into an old abandoned testament. Greg meets a homeless, retired old blues singer named Lemon Brown. Lemon Brown lived in the testament. Lemon brown heard Greg coming in and thinks Greg came to steal him treasure. Lemon Brown frightening Greg “Don’t try nothin’ cause I got a razor here sharp enough to cut a week into nine days!”(Pg.

477). Lemon Brown is very protecting of a treasure that has no money value which he truly cares about.

Brown then learns Greg isn’t trying to steal nothing. (Pg.478) Lemon Brown asks, “You ain’t one of them bad boys looking for my treasure is you?” Greg replies, “I’m not looking for your treasure…if you even have one.” Greg answered sarcastically wondering if Brown even had a treasure worth more than where he lived.

Lemon responds, “What do you mean if I have one?” Greg says you have gold coins? Automatically thinks of a money value treasure. Lemon Brown teaches him, “Everyman has a treasure”.

Moments later there was a noise downstairs. Outside the window were people coming looking for Lemon Brown’s treasure. The bad people thought Brown’s treasure had lots of money value. (Pg.480) “You got any money,” bad people asked Brown. Automatically thinking of money and not sentimental value. Lemon Brown solved the problem by falling down the stairs on top of the burglars and saved Greg and his valuable treasure

Lemon Brown taught Greg a valuable lesson and went home to talk to his dad. Greg learns from Lemon Brown what a true treasure is. A true treasure doesn’t need a money value. Greg learned he was his dad’s treasure and that’s why his dad was so concerned of him. Greg finally understood Lemon Brown and his dad. 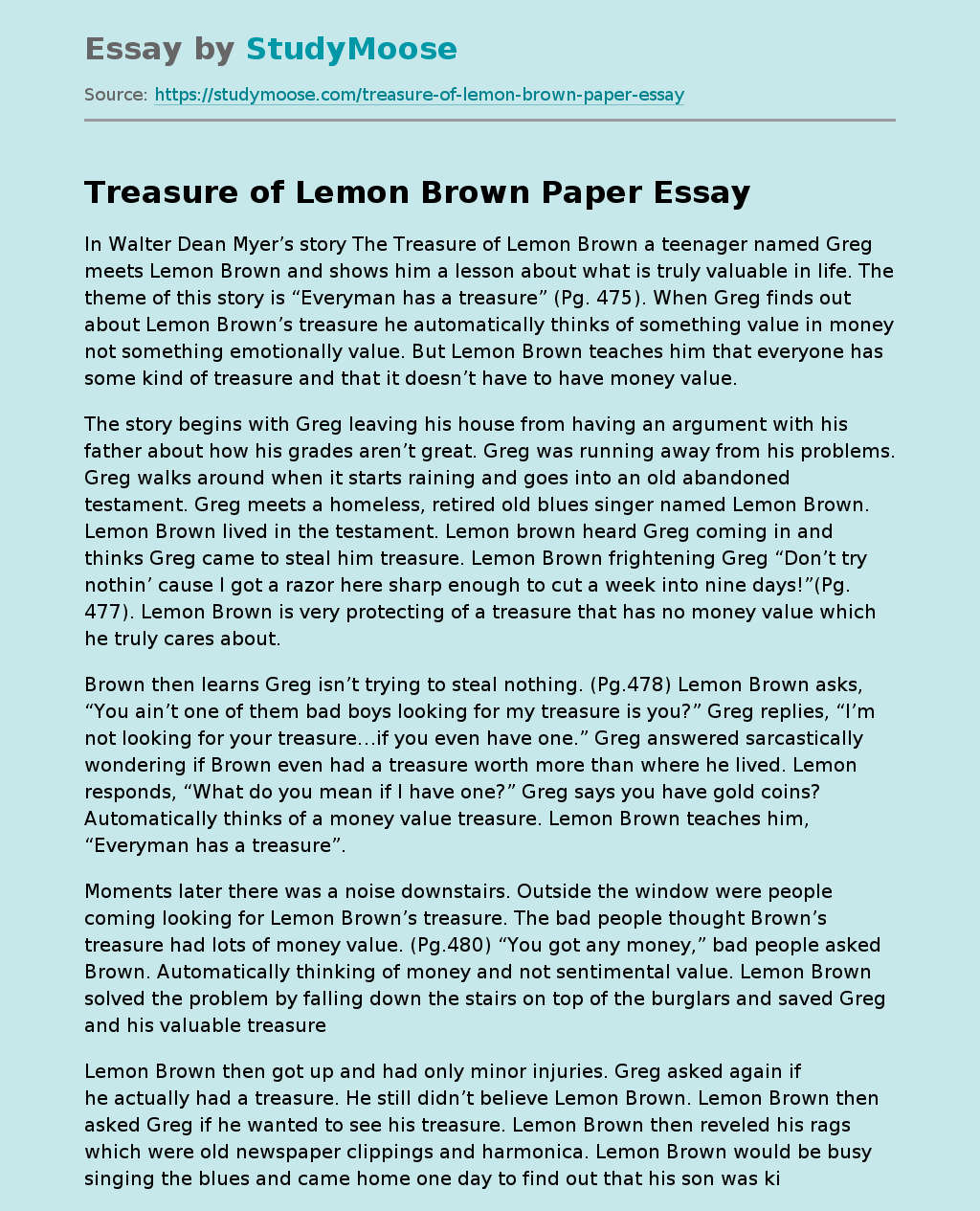