Qualities of a good doctor consist of compassion, empathy, understanding, courage, and honesty. Dr. Livesey has these qualities, but he is also an opportunist, morally sound, and driven by money. He is on the side of civilization when it comes to the conflict of lawless criminals versus the civilized world. Dr. Livesey is a good balance between good manners and bad habits.

Dr. Livesey lives a steady and practical life. He is a respected man, very knowledgeable, and wise. This is why Jim entrust him with the treasure map.

Don't use plagiarized sources. Get your custom essay on
“ Doctor from Treasure Island ”
Get custom paper
NEW! smart matching with writer

His actions are reasonable and ethical. He never makes a move on impulse. He can talk to people from different walks of life, which shows he has empathy. He is the best representation of a civilized world man, and everyday life, instead of this idea of adventure, and fantasy. He examines the judgment of others through his own world and values. There’s clearly a huge class difference between Dr. Livesey and the pirates,and it is emphasized when Dr.

Livesey says to Billy Bones, “I have only one thing to say to you, sir … if you keep on drinking rum, the world will soon be quit of a very dirty scoundrel!”(499)

With Jim’s father being too scared to ask Billy to pay his tab, and everyone falling silent when he slaps his fist on the table, he has given himself power over the people. This power is insolent to the civilized world, and offends everything Dr. Livesey believes in. These things include responsibility, civility, and values of order.

Dr. Livesey, who encapsulates the traditional and structured world, assumes the rum will kill Billy, and proclaim all pirates are scoundrels. Dr. Livesey is also skeptical of the squire’s judgment of human affairs and believes it to be less reliable. He says, “Well, squire … I don’t put much faith in your discoveries, as a general thing; but I will say this, John Silver suits me.” (523) Yet, John Silver tricked Dr. Livesey. Silver is the ringleader of the pirates. Silver is a contradicting character. He is not too good, but not too evil either, which is how he was able to deceive Dr. Livesey.

Dr. Livesey is an opportunist who is driven by money. His uses his knowledge about human nature to send the pirates on a mad hunt for the treasure. He warned Trelawney to not go running his mouth to the crew about the treasure hunt. He knew it could detrimental to the process, and was proved right. His rational thinking and common sense is what led to the idea of sending Ben Gunn to scare the pirates with his imitation of Flint. Dr. Livesey gave the pirates the treasure map, knowing it was useless. His plans are well thought out. Dr. Livesey is not one to take risks, therefore his plans are safe and efficient. He does not put them into play until he knows for sure the potential outcome. Jim thinks he is decent, but not inspirational because of this.

Dr. Livesey is morally sound. He bravely fires at the pirates at the treasure site, but tends to their wounds after the battle. He says to Silver, “ I suppose you would hardly ask me to call you a humane man, and so my feelings may surprise you, Master Silver. But if I were sure they were raving – as I am morally certain one, at least, of them is down with fever – I should leave this camp, and at whatever risk to my own carcass, take them the assistance of my skill.” (604) He speaks gently to the wounded, and really seems to care about them and their health. He feels as a doctor, it is his duty to help those that are hurt. No matter who side the men were on, he showed sympathy to them all.

This sympathy allows him to easily interact with the pirates, more so than Captain Smollett and Squire Trelawney. They do not care to be helpful to the other men, and this proves again how much of a gentleman Dr. livesey is. His ability to empathize with others makes him more pliable than Captain Smollett, whom is more obligated to his duty. When Jim is being held hostage a the pirate camp, Dr. Livesey is willing to to take responsibility for Jim regardless of the consequences. He says, “I’ll take it on my shoulders, holus bolus, blame and shame, my boy; but stay here, I cannot let you.” (592) Dr. Livesey is looking after Jim as if he is his father, thus continuously showing his morals and good character through his actions.

Dr. Livesey exhibits the qualities of a good doctor. Yet, he sometimes uses his knowledge to trick people to benefit himself. In the end, the pirates and doctor’s worlds are distorted. They both can inspire, or destroy. 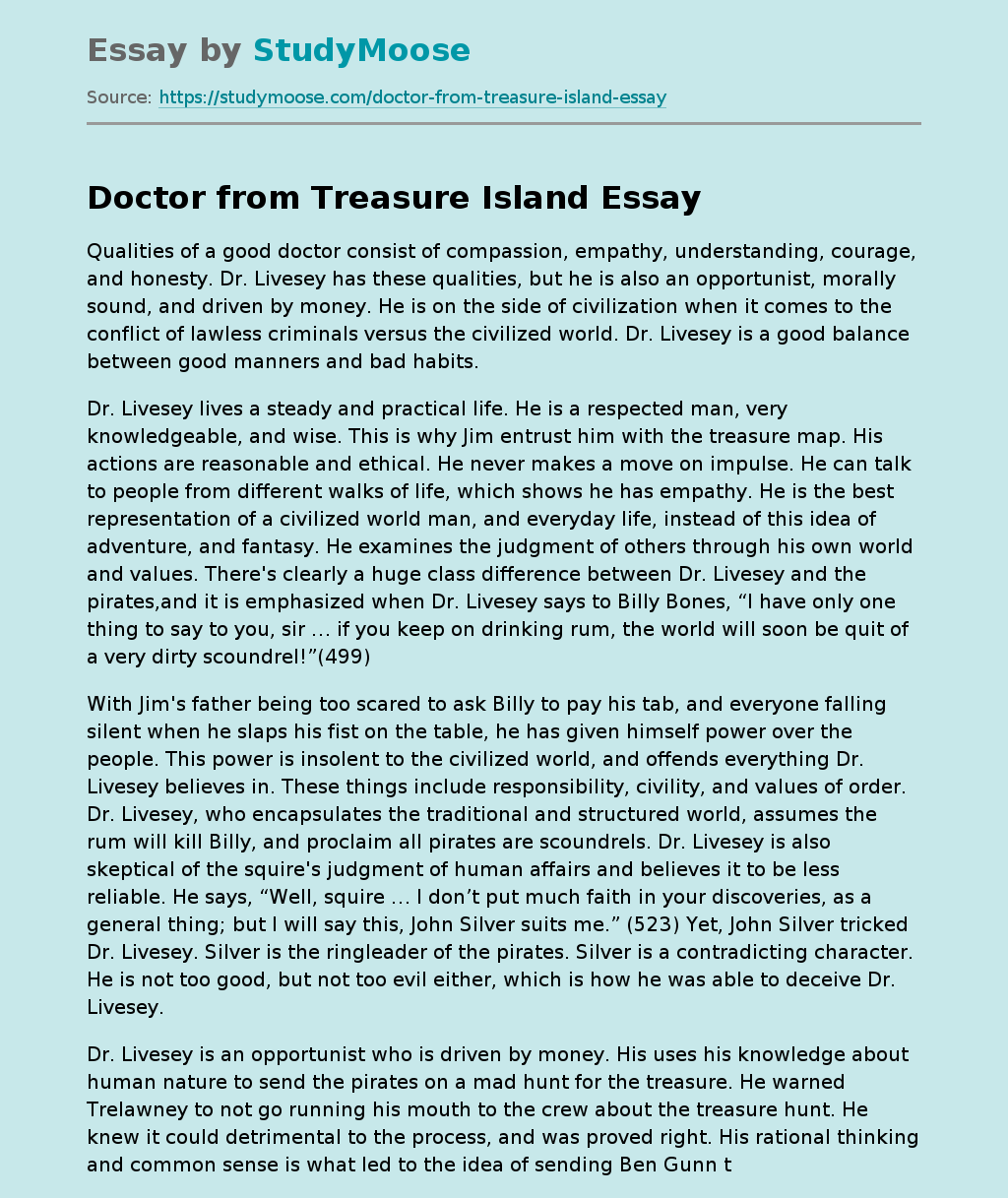