Everyday people mature, learn something new, and gain new experiences. There is always critical moments in life that play a part in a young person transitioning into adulthood. In Treasure Island, the coming-of-age of Jim Hawkins is a theme throughout the book.

In the first half of the book, Jim is an impressionable boy who lives with his parents in an inn. He knows very little about what life is like outside of his home. The second half of the book is when Jim and the pirates begin searching for the treasure, more obstacles take place and it is apparent that this is when Jim slowly begins to grow up.

Don't use plagiarized sources. Get your custom essay on
“ Treasure Island: Themes ”
Get custom paper
NEW! smart matching with writer

Treasure Island is a coming-of-age story in which Jim Hawkins goes on an adventure filled with trials and stipulations that allow him to discover manhood.

At the beginning of the book, Jim is an innocent young boy that helps his mother and father take care of the inn. He is easily frightened as shown when he runs to his mother when he is scared by Pew and said: “I never saw a more dreadful figure” (Stevenson 28).

His cowardly qualities are also shown clearly in the beginning when his nightmares about Billy Bones are talked about (Stevenson 6).

His lack of courage is most demonstrated when he refuses to go back into the inn after the pirates’ attack. Although Jim is scared easily at this point, he soon will realize that these experiences contribute to his growth from a young boy to a young man.

As the story goes on, Jim slowly but surely begins to evolve out of the childhood phase. The author begins to demonstrate his maturity growth when his father and Billy Bones die. He is placed with great responsibility after his fathers’ death, like arranging the funeral. His juvenile mind has no choice but to become more mature and rational. When this happens, it starts the actual development of Jim as a young man.

Because he can’t rely on his father anymore, he is forced to make decisions on his own. With these decisions, came the beginning of the adventure to find the treasure. Along with conflicts along the trip, Jim had many role models that played a part in him becoming a man. Dr. Livesay was a role model because he was the one who helped point Jim in the right direction as far as making good decisions.

Even Long John Silver was someone that Jim looked up to. Silvers’ courage and independence was something that Jim grew to admire. Although Jim was learning life-lessons from his “role models”, he was going through real-life experiences that required him to not have a cowardly mentality.

When he overhears Silver, Israel Hands, and Dick planning to kill the map holders as soon as they reach the island, his growth is evident. He tells Dr. Livesey what he has heard and Livesay tells Trelawney and Smollett to listen to their plot.

It was a milestone in his journey to manhood because he proved he could make the right decisions without being frightened or timid. Along with two murders that occur, fights, and plots that were to transpire, Jim proves he can have the courage and the maturity that no one would have expected.

In the chapters where Jim is nearing the end of his adventure, is when Jim takes exponential steps out of his adolescence. When Silver gives Jim the ultimatum of joining the pirates or not. Jim decides he would rather die than join the pirates. By Jim not wanting to join the pirates, his character and his ability to make strategic, smart decisions is shown.

Silver gains respect for Jim and this decision ultimately proves his bravery and responsibility. The relationship between Jim and Silver shows that Jim has become strong and demosnstrates how much Silver appreciates him. From this voyage, Jim is able to see the world with a whole new outlook.

Treasure Island is a coming-of-age story in which Jim Hawkins goes on an adventure filled with trials and stipulations that allow him to discover manhood. In conclusion, it is evident that due to certain elements Jim turns into a responsible and mature young man. At the beginning of the book, Jim is an innocent young boy living with his parents and knows little about experiences in the world.

By the end of the book, he is a young man who has been through traumatic experiences,made a voyage across high seas, and killed someone. When he returns home, Jim is has grown extremely and learned a lot about life and himself from his experience at sea. His adventures ultimately allowed him to go from being an impressionable young man to a young man who is capable of making reasonable decisions. 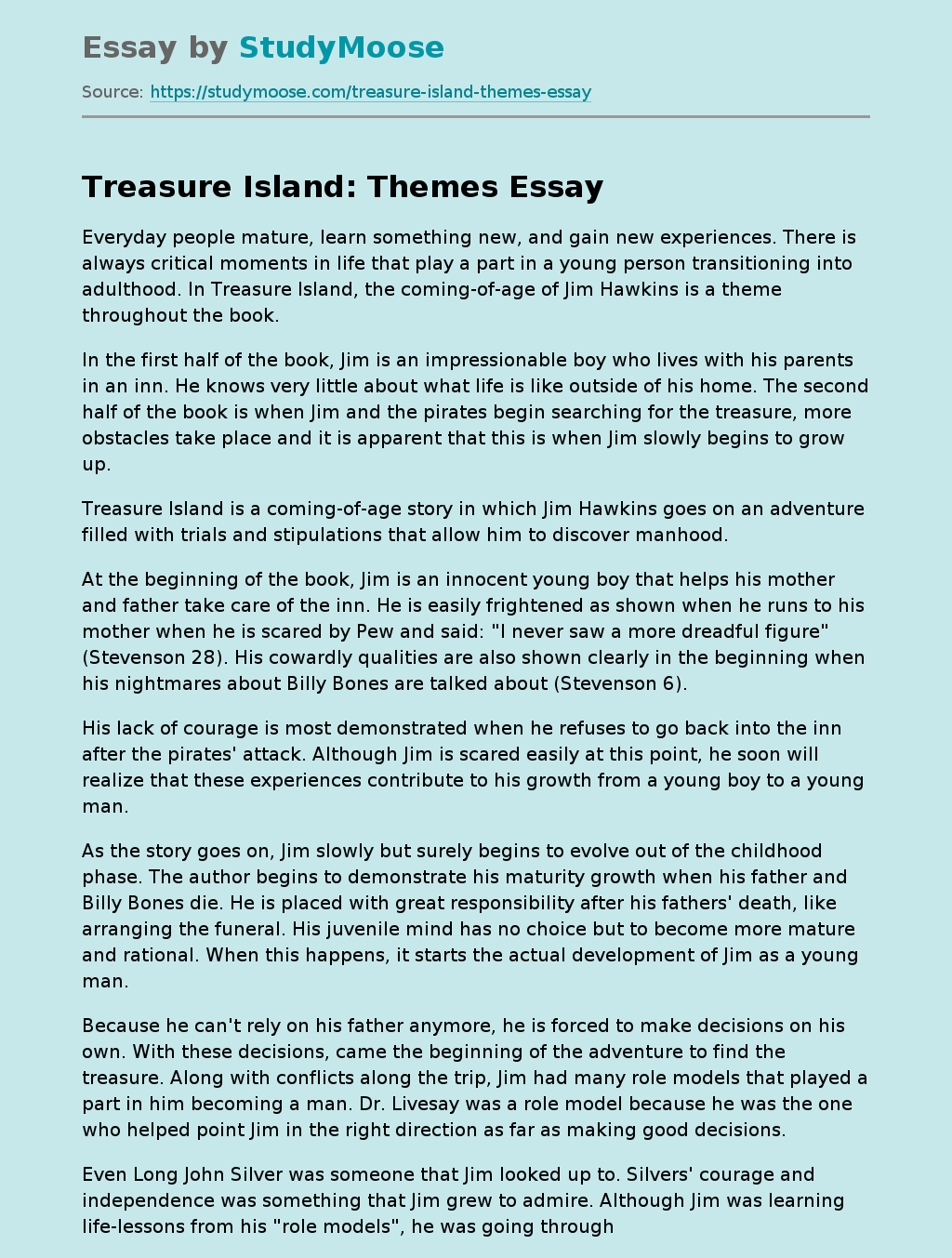