On February 26, during halftime of the NBA All-Star game, the 17-year-old high school junior went to a nearby store in the Orlando suburb where he was visiting his father and stepmother in order to buy some candy for his younger brother. He returned to his family a six-foot, three-inch, 140-pound corpse. We know who killed him. George Zimmerman, a 28-year-old college student who had appointed himself captain of the neighborhood watch for the Retreat at Twin Lakes gated community, admits to shooting Martin with a 9mm handgun.

Don't use plagiarized sources.
Get Your Custom Essay on Trayvon Martin Just from $13,9/Page

Zimmerman spotted Martin and followed him in his car before placing a 911 call to report a “suspicious” person in the area. “This guy looks like he’s up to no good, or he’s on drugs or something,” Zimmerman told the 911 operator. “He’s just staring, looking at all the houses.” What happened in the approximately twenty minutes between the time this call took place and when Zimmerman fired the shot that killed Martin is disputed—although recordings of the 911 call provide chilling hints—but what we do know is that Zimmerman claims he shot the young man in self-defense.

This was enough for the police to let him go.

Zimmerman was not and has, as of this writing, yet to be arrested. We also know that Trayvon was black. There are some who would argue that race is not a factor here. We’ve heard that Zimmerman is Hispanic—but this is not a defense. Neither is the statement released by Zimmerman’s father, which employs the “he has black friends” claim. Mentoring two black children and word from a black neighbor that she would entrust Zimmerman with her life doesn’t preclude him from holding racist views of black men. If it did, how then does he explain what made Martin a suspicious enough figure that it warranted Zimmerman leaving his vehicle and getting into an altercation with the young man? What was the threat? We know that the only items retrieved from Martin’s person were a bag of Skittles, a can of iced tea, and some money, so unless Zimmerman felt he was in danger of contracting a deadly form of diabetes or a lethal cavity, he has more explaining to do. But whether the item is as innocuous as a bag of candy—or, as in Amadou Diallo’s case, a wallet—the assumption is that the natural state of black men is armed and dangerous.

If Martin was so threatening, why didn’t Zimmerman wait for the police to arrive, particularly after being told not to follow the suspect? (“We don’t need you to do that,” the dispatcher told him.) Why have three witnesses come forward to say that in the moments before the shooting they heard crying that stopped as soon as the bullet fired? Was Martin crying in anger? And what if he was? Would he not have a right to be angry that a man was stalking him for no reason? And if Martin was the aggressor, how did he manage to get a man over a hundred pounds heavier than himself to the ground? What injuries did Zimmerman sustain that would lead us to believe there was a struggle that left him in the grip of a life-and-death situation? The 911 tapes that have been released suggest that the two shots that were fired, one from a distance, the other the fatal one from close range. Does self-defense require a warning shot? That these questions are likely to go unanswered in court of law is thanks to Florida’s “Stand Your Ground” law, which places the threshold for self-defense so low that you need little more than your word to show that your life was in danger.

Zimmerman’s description of events was enough for the police, who evidently feel they know all that they need to know to determine that Zimmerman should be free to walk the streets while Martin’s family mourns. The crime of killing a black person still is not greater than the crime of being black. And, as one of the family’s attorneys asked, “Do we really believe that if Trayvon Martin had pulled the trigger, he would not have been arrested?” We know that being a black man in America is a life-threatening occupation, whether you’re a 22-year-old in Oakland or a 13-year-old in Chicago or a 17 year-old in Orlando. The characters change, but the script remains the same. When everyone has had their say, another young black man has been killed for doing nothing more than being a young black man. What we don’t yet know is what it will take to get justice for Trayvon. A wonderful thating that started was the signing of the Change.org petition started by his parents calling on Florida’s 18th District State’s Attorney to prosecute Zimmerman. Trayvon is dead, and black men everywhere live in constant fear they could be the next Trayvon. With the one-year anniversary of Trayvon Martin’s death being marked this week, it would be nice to report that the Florida Legislature is going to tweak or get rid of the controversial Stand Your Ground Law.

Perhaps Stand Your Ground laws, also known as “Shoot First” laws, should be called Last Man Standing Laws, because the last man standing in a fatal altercation calls the shots, so to speak. And it seems to me that the last man standing in a Zimmerman-Martin type situation always claims self-defense. The expansion of this presumption of innocence creates an impossible situation for prosecutors when there are no witnesses, which plays nicely into the hands of those who would commit murder, intentional or otherwise. While it has always been a goal of those so inclined to avoid witnesses, under Stand Your Ground laws they really do have a free-shot zone. State legislators from across the nation have begun to call for the repeal of the law, echoing the comments of South Carolina State Sen. Robert Ford, who said, “This could happen to anybody — it doesn’t have anything to do with race or political party.” In Georgia, Rev. Markel Hutchins, a civil rights advocate, announced his intention to file a lawsuit challenging that state’s Stand Your Ground Law. 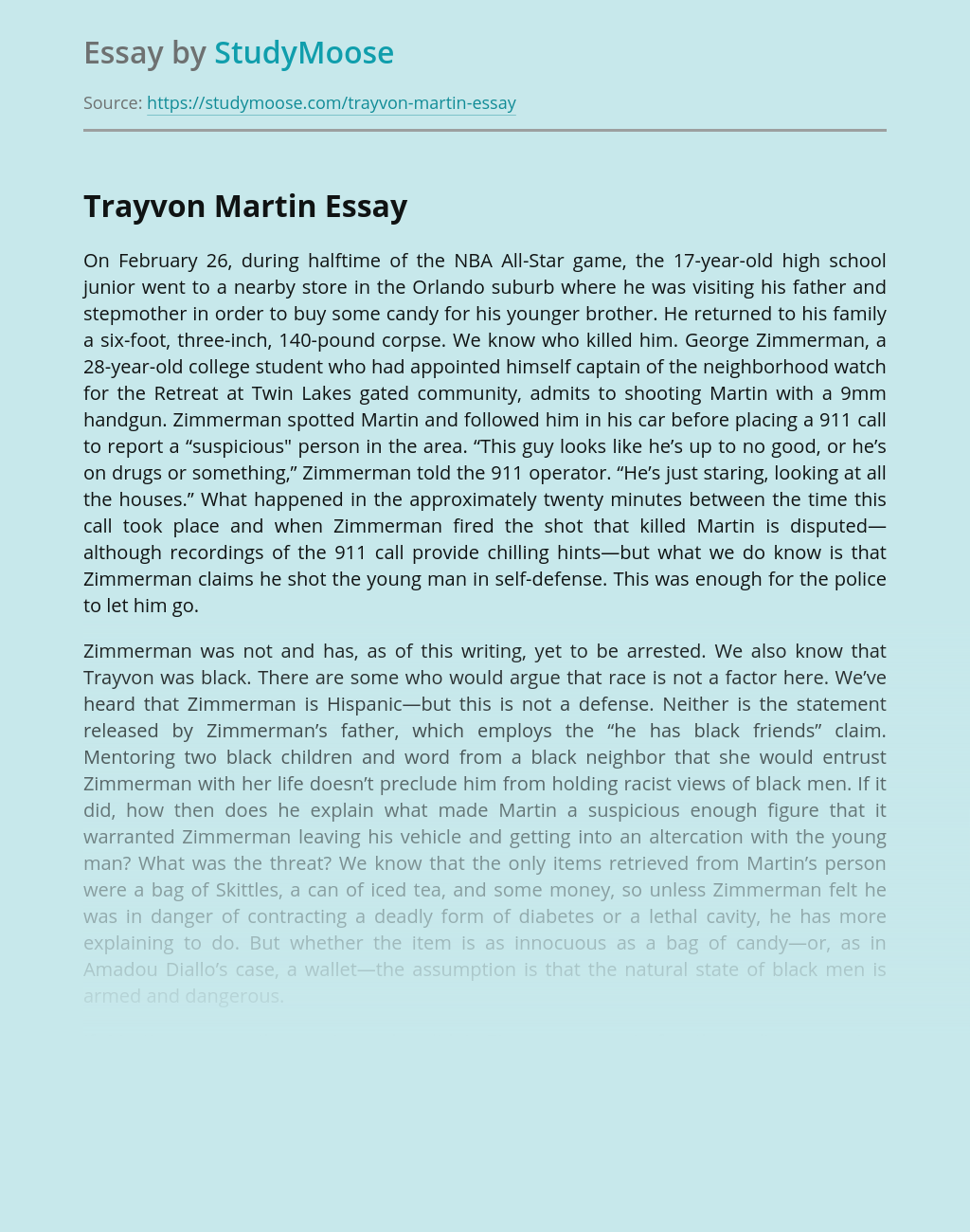 Your client, Mr. Black, is a 72-year-old man who called his TeleNurse Line from home and, based on the symptoms he described, was advised to go directly to the Emergency Department at his local hospital. His admitting diagnosis is exacerbation of heart failure (HF). His Ht is: 5’9”, Wt. 235 lbs. He states that his... VIEW ESSAY

View sample
Achebe's "An Image of Africa : Racism in Conrad's Heart of Darkness"

View sample
Get Essay
The main participants of business

Identify and explain any FOUR (4) characteristics of a partnership. A partnership means a business is founded by two or more individuals, for example like small businesses which including retail or services business. There are certain characteristic for partnership, the first characteristic is partnership is limited life. Partnership may only established in certain year based... VIEW ESSAY

View sample
The stories of Bartleby and the metamorphosis symbolism

The idea of human self-alienation has played a crucial role in modern thought from German classical Idealism to Marxism and Existentialism (Seigneuret 19). Kafka’s the Metamorphosis is a striking example. Gregor Samsa’s transformation into vermin presents self-alienation in a literal way, not merely a customary metaphor become fictional fact. The travelling salesman wakes up one... VIEW ESSAY