How does Shakespeare present love and hate?

Shakespeare wrote the play of two lovers’, Romeo and Juliet. Thought to be, one of the greatest, tragic love stories of all time, however, throughout the play, Shakespeare contrasts love with hate at every possible moment. The two themes, love and hate, are like twins separated at birth, brought up in different backgrounds, a totally different society. Combining these two themes, creates curiosity into how ‘a pair of star crossed lovers’ and an ancient feud of two rivalry family’s, can come to together to present, a great and unforgettable love, with fate bringing them to their death.

Don't use plagiarized sources. Get your custom essay on
“ How does Shakespeare present love and hate? ”
Get custom paper
NEW! smart matching with writer

At the beginning of each act, there is a chorus. This device, is used to inform the audience of the events to follow in the next act, it is written in the sonnet form, which was popular at the time the play was written. Writing in this form, creates suspense and leaves the audience anxious to see the next act. At the beginning of act 1 the prologue reads, “from forth the fatal loins of these 2 foes.

A pair of star crossed lovers take their life” here we have love and hate side by side from the beginning. It tells the audience that, regardless of the hate of the two families, a pair of young lovers will do whatever it takes to be together.

The prologue is very formal and solemn, it is written like this to create tension. So when the play begins, two servants, from the house of Capulet enter, they talk about fighting and raping the Montague’s, “I will push Montague’s heads from the wall, and thrust his maids to the wall”.

So straight away the audience immediately sees hatred being portrayed. Then they see some Montague servants, and decide to start a fight, “I will frown as I pass by, and let them take it as they list”. A fight then begins. However when Benvolio enters the mood drastically changes, as we begin to see the first signs of love and peace, as he tries to break up the fight. “Part fools! Put up your swords you no not what you do.” No sooner have these words of peace been spoken, hate is brought straight back into play, with the entrance of Tybalt! Who forces Benvolio to fight. Then enters Capulet and Lady Capulet, and Montague and Lady Montague.

Here we see the love and hate intertwining with the men wanting to fight, but their wives are holding them back, during which the prince enters. Immediately the fighting stops. Here you see the superiority of the prince as he threatens everyone, “if you ever disturb our streets again, your lives shall pay the forfeit of the peace”. All this of course happening in the street, creating chaos amongst the town. This presents the feud being not just between the two families, but the whole town, as we are shown, during the fight, with citizens of the town willing to join in fighting both Montague’s and Capulet’s, “Clubs, bills, and partisans! Strike! Beat them down! Down with the capulets! Down with the Montague’s!” Which portrays more hatred!

During the play we see a lot of respect being portrayed, a lot of it within the two families, for instance in act 1 scene 1 when Benvolio is talking to his uncle (Montague)”My noble uncle” although this is perceived as respect, it could also be perceived as love. Whereas in act 1 scene 5 when Tybalt is arguing with his uncle (Capulet) although he shows him respect by listening to his wishes, he has hate burning inside of him, this both for his uncle and Romeo, “Patience performance with wilful choler meeting Makes my flesh tremble in their different greeting”. There is also respect shown for the Prince, “the prince came, who parted either”.

At the time the play was written, arranged marriage was very common. People did not marry for love, but for wealth. Juliet’s parents arranged for Juliet to marry. They shouldn’t have, as Juliet was only young and was very vulnerable. Juliet was also still a child and still growing up, she wasn’t ready to marry, but her mother and father thought at Juliet’s age ‘happy mothers are made’.

The play is set in Verona, Shakespeare set it there, because he was trying to describe an exotic place, were the audience could believe a tragic love story might happen. During the play we come across many types of love, The Montague’s love for their son is one of them. We are shown of their concern for Romeo, very early on in the play, “Could we but learn from whence his sorrows grow, we would as willingly give cure as know.” Another type of love is Benvolio’s love for his cousin, “so please you, step aside; I’ll no his grievance, or be much denied.” All these types of love were within the family. One, which was not, was Romeo’s ‘supposed’ love for Rosaline, “I do love a women”.

At the end of act 1 scene 1, Romeo enters and explains of his undying love for Rosaline, the only problem is, she does not like Romeo and rejects his love, “she’ll not be hit with cupids arrow”. In act 1 scene 2, Benvolio suggests that Romeo should go to the Montague’s masked ball to take his mind off Rosaline, so he can compare other beautiful girls with Rosaline, and realise that she’s not that nice after all, “At this same ancient feast of Capulet’s…and I will make thee think thy swan a crow.” Romeo agrees to go but only so he can admire Rosaline, “I’ll go along, no such sight to be shown, But to rejoice in splendour of mine own.”

When at the masked ball, Romeo catches his first glance of Juliet, he immediately falls in love with her, without a second thought for Rosaline, “did my heart love till now?” Forswear it, sight! For I ne’er saw true beauty till this night.” Romeo speaks in sonnet form, which is typical for lovers, and uses rhyming couplets, “so shows a snowy dove trooping with crows, as yonder lady o’er her fellows shows.” Straight after this, Shakespeare brings hate back into the play with Tybalt. Tybalt despises the Montague’s, so when Tybalt hears Romeo’s voice at ‘his’ party, “This by his voice, should be a Montague. Fetch me my rapier, boy.” The mood changes rapidly back to hate. Tybalt informs Capulet, who tells him to ignore him. Tybalt is furious by his uncle’s wishes, and swears revenge on Romeo, “I will withdraw, but this intrusion shall, now seeming sweet, convert to bitterest gall.”

In the flash of an eye lid, the hate is turned back into love when Romeo approaches Juliet. Romeo uses parts of the petrachan tradition. He uses lots of imagery related to religion. “This holy shrine, the gentle sin is this” The love that is being portrayed towards Juliet is true love, unlike his ‘supposed ‘ love for Rosaline. We believe Rosaline was a ‘crush’ as he had never actually spoken to Rosaline, only gazed at her from afar. Shakespeare uses dramatic irony, when presenting Romeo and Juliet’s first meeting, in that the audience no what is happening but the characters don’t i.e. the audience no that they are from rivalry families but Romeo and Juliet do not, as it is a masked ball.

The nurse, who brought Juliet up, was more like a mother than her real one. When she calls for Juliet, Romeo asks her who this beautiful girl is that he has fallen madly in love with, when he realise he is in love with his only enemy, “My life is my foe’s debt” he feels like he has no power, and Juliet’s response is much the same, “my only love sprung from my only hate. Too early seen unknown, and known too late.” The only people she hates brought the only person she loves, into the world, and now that she knows who he is, it’s too late to change anything, because it was love at first sight.

In conclusion, Shakespeare contrasted both love and hate during act 1 scene 1 and act 1 scene 5, to create a strong beginning to the play. He presented love and hate in many different ways, but always alongside each other, intertwining throughout. He keeps these two themes combined together, through the rest of the play.

How does Shakespeare present love and hate?. (2016, Jul 02). Retrieved from https://studymoose.com/how-does-shakespeare-present-love-and-hate-essay 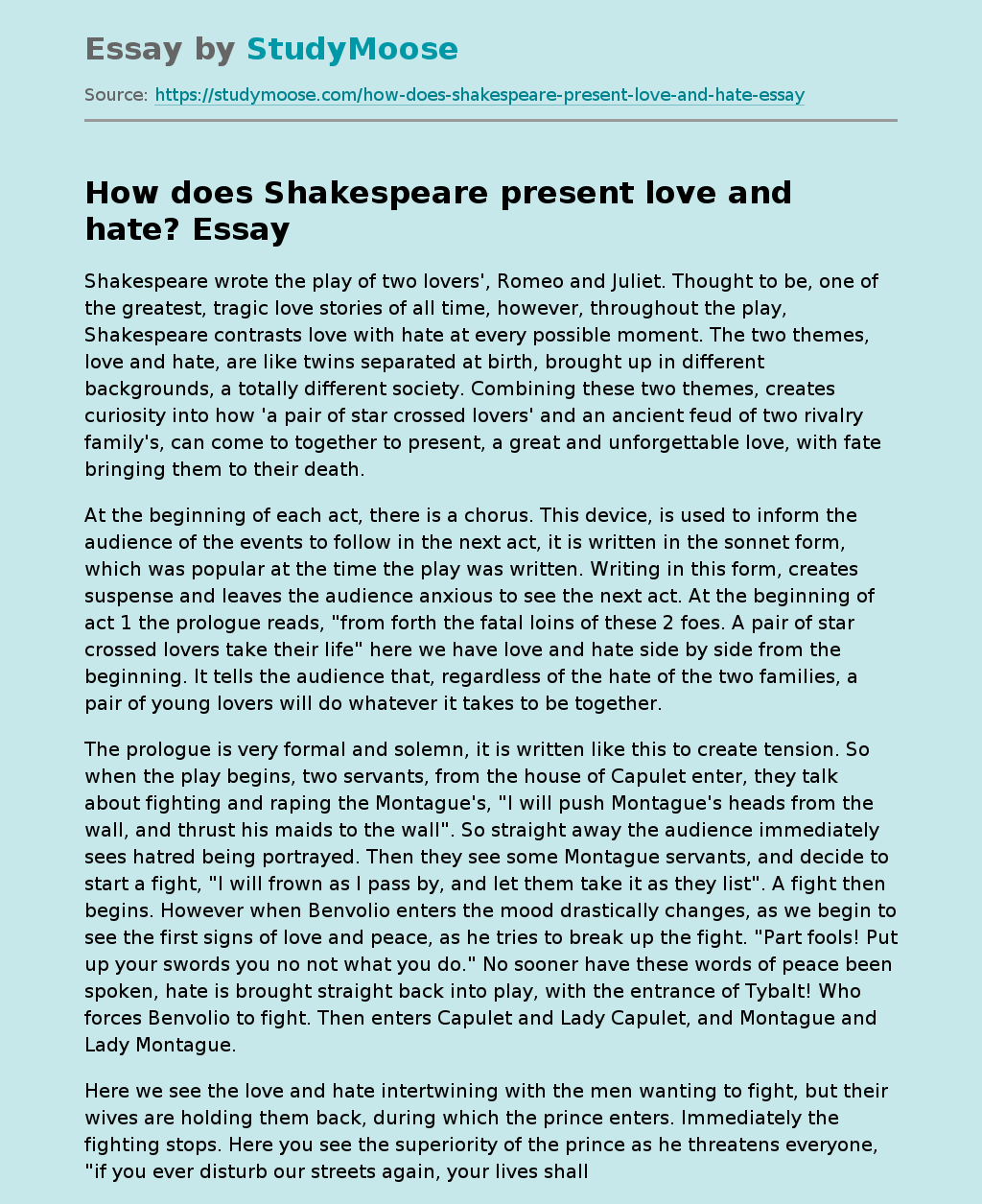