The power of the woman comes from her spontaneity, presence and being who she is? She has been the tower of strength, patience and perseverance. History of nations worldwide is the proof of her significant role. She has been viewed as the nurturer, nurse and caregiver. Her image is the personification of love and tolerance. She creates, she gives and she embraces her family members unconditionally. She takes care of her home, her children and her family. She is there, always ready to serve and care.

Don't use plagiarized sources. Get your custom essay on
“ Traditional Housewife ”
Get custom paper
NEW! smart matching with writer

She cooks, cleans and procures supplies for everyday living. This pillar of strength is the traditional housewife, who has faded into background of modern day needs, emerging technology and growing industrialization.

Until industrial revolution of nineteenth century, most mothers in Europe and America not only stayed home to tend their children and house, they also worked side by side with their husbands to make financial contribution to the family. There was division of labor based on childbearing and strength, but without women, the crops would not have been harvested, food would not have been stored for winter months and people would not have had clothes to wear.

The success of economy rested on the capable shoulder of the women. She fulfilled her role not out of necessity, but out of long, “real” tradition and great skill. (Byington, 2001)

The priorities changed, expectations grew and her role was not valued any more. She was thrust into the background of anonymity. She had to emerge as the savior of the household in a new role. She emerged as a working woman of 21st century, walking side by side with men, braving the role of care provider on her capable shoulders.

Terry Hekker’s, “The Satisfactions of Housewifery and Motherhood” and Hope Edelman’s “The Myth of Co-Parenting: How It Was Supposed To Be. How It Was,” are two antithetically toned readings discussing perspectives of what it is like to be a house wife. Hekker examines as more of a traditional housewife and Edelman as a modern housewife because Hekker actually enjoys being a housewife and Edelman wants to get back into the workforce. Both authors investigate the roles of a housewife financially and robustly, with many egoistic opinions. Hekker and Edelman have contradicting feelings about being housewives.

While Hekker explains how she is embarrased, Edelman is feeling frustrated and useless as a housewife. According to Hekker, “Ms. Putdown asked me who I was. I told her I was Jack Hekker’s wife… She took my hand and asked if that was all I though of myself-just someone’s wife? ” (392). In this quote, Hekker has a difficult time revealing to others that she doesn’t really enjoy the career of a housewife but has no better skills than to be a modeled-housewife. According to Edelman, “It began to make me spitting mad, the way daily duties of parenting and homeownership started to rest entirely on me…

The frustration I felt after researching and visiting six preschools during my so-called work hours” (409). Edelman is growing quite infuriated and frustrated with not being able to work. She also explains to her husband how she would prefer to have “shared responsibilities” and “equal division of labor” rather than just being a housewife. The main differences between Terry Hekker’s, “The Satisfactions of Housewifery and Motherhood” and Hope Edelman’s “The Myth of Co-Parenting: How It Was Supposed To Be. How It Was,” are the years they were published and their perspectives of traditionalist and modernists housewives.

Hekker shows signs of a traditional housewife, while Edelmans shows more modernist houswife signs. Hekker’s column was publish in the late 1970’s when women began joining the workforce rather than being a “stay-at-home” mom. Hekker explains throughout the text how full-time housewives are decline and how she is taken for granted even though being parents is truly a job. “I’m one of the last of the dying breed of human females designated, “Occupation: Housewife. ”… Today fewer than 16 percent of American families have a full-time housewife-mother.

For years of being considered unproductive (unless you count five children, which no one does. For years of being viewed as a parasite, living off a man… For years of caring for five children and a big house and constantly being asked when I’m going to work. ” (Hekker 390-91). Hekkers proves statistical evidence that housewives are on the slope to extinction and feels taken for granted from her husband and others. Instead of Hekker moving forward and deciding to get a career, she rather be a full-time “stay-at-home” mom. Edelman has a more modern viewpoint as a housewife rather than traditional.

The idea of dual-income and a balanced relationship is Edelman’s focus but unfortunately she must reside on her husband finacially while he launches his Internet Company and she becomes a housewife. “… I had superimposed on the idea of marriage without ever really thinking it through. If I’m going to contribute to half of the income, then he’ll contribute half of the housework and childcare… In this post-second wave, post-superwoman, dual-income society we’re supposed to live in, the mother nearly always becomes the primary parent, even when she too, works full-time…

” (Edelman 408-11). Edelman is growing impatient of being a housewife and wants to get back into the workforce. Edelman clearly wants to have a fifty fifty relationship and her husband seems to always be working. Edelman must pick up the slack back-at-home while she tries to support her husband new launching company even though she truly dislikes it. Even though Hekker and Edelman have distinct views as housewives, they both are supported finacially by there husbands and they had there mother as main role models. Hekker has been finacially supported for 22 years and

How Has Science Helped the Housewife?

Every woman likes to look elegant and charming and the man wishes it to be so too. Thus,science has catered for the looks of the female. Today,women want to be more and more gorgeous to prove that no one can compete with them. Science has created a variety of cosmetics product to boost the housewife to improve her usual make up. Those beauty products,cream and lotions fabricated for their use. Those products are not only cheap but will make the women resplendids.

Also,due to science there is aesthetic surgery which is innovative. Some housewives think that they are not enough pretty and rely on aesthetic surgery to enhance their appearance. Aesthetic surgery is now very common in countries such as the United Kingdom,France and Germany. In Asia,cosmetic surgery has become an accepted practice and China is the Asia’s biggest cosmetic surgery market and there are also liposuction the removal of fat deposits by traditional suction technique.

All this prove that science has advance the life of housewife. On the other hand,concerning leisure and entertainment the housewife has the radio,television and now the latest models of ipod . Now,the housewife while doing the house chores listen to the radio the whole day. She is aware of the actuality in her country. Moreover,the television is almost an addiction for her. She is going to do all her chores in the morning to be able to sit comfortably to watch her favorite series.

There are various programmes which are beneficial to the housewives for example recipes,advertisement,programmes on interior decoration,on family planning,how to rear children,Science has promote housewife way of living that is they are so much leisures and entertainments that they do not feel lonely. When her husband return home she welcome him with a smile not with a tiresome face. Furthermore,Science has enlighten her mind and now she has a broad knowledge of everything and will be no more left in ignorance if she do not know something.

In everyday life the housewife may have to communicate to different relative or friends at a very far off distances. However,time and distance both have been conquered by science. For communication the housewives have telephones,mobiles,wireless,E-mail,VASTs and internet etc… Mobiles have spread with maintenance costs reducing it will enable the housewives for example to call her husband after office hours and check his whereabouts;the housewife can check on the teenage sans and daughters and command them to go home since it is already past their allowable time in giong around with their friends at night. 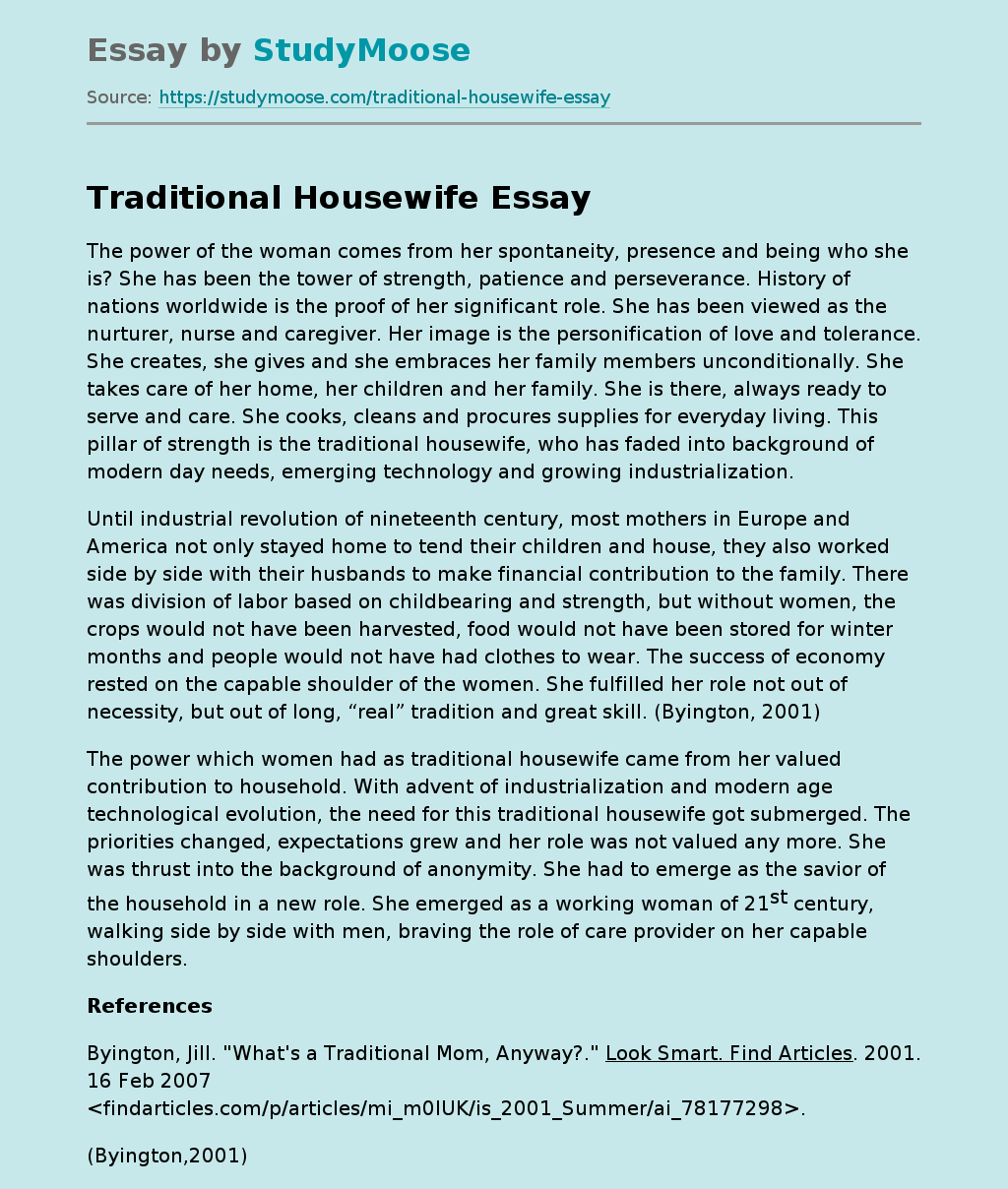