A discussion of how the tension between traditional and modern views of the world play out in Achebe’s and Desai’s novels.

Tradition vs. Modern How does the tension between traditional and modern views of the world play itself out in Achebe’s and Desai’s novels? In both Achebe’s and Desai’s novels, tension and conflict between the new and the old, traditional and modern are the strong undercurrents that move the story and the reader into an unconscious emotional uneasiness.

Don't use plagiarized sources. Get your custom essay on
“ Tradition vs. Modern ”
Get custom paper
NEW! smart matching with writer

In both novels, the backdrop and the story are engrossed in a struggle between two worlds, the new and the old fighting out its battles in the characters portrayed within. Achebe makes his stand in eastern Nigeria while Desai illustrates her point in Old Delhi. In the first part of “Things Fall Apart”, Achebe, portrays a traditional African culture, but one on the verge of change. Early in the novel you can see change is already taking place.

“…in the past a man who broke the peace was dragged on the ground throughout the village until he died. But after a while this custom was stopped because it spoiled the peace which it was meant to preserve.” But traditions continued on, including ritual killing and banishment of one of the village leaders. But then things begin to change more rapidly with the coming of the missionaries. When they gave them the “evil forest” to build their churches on there was no turning back. Many of the abused and outcast were converted when they saw that these new people prospered in the evil lands.

The people started to revolt against their traditional gods. “Three converts had gone into the village and boasted openly that all the gods were dead and impotent” They were beaten severely. With the coming of government the Christians gained power and shook the faith of the old ways. I believe the book pivots on this statement: “Does the white man understand our custom about land? How can he when he does not even speak our tongue? But he says that our customs are bad. How do you think we can fight when our own bothers have turned against us? The white man is very clever. He came quietly and peaceable with his religion. We were amused at his foolishness and allowed him to stay. Now he has won our brothers, and our clan can no longer act like one. He has put a knife on the things that held us together and we have fallen apart.” It is interesting how the whole process came about. The missionary “Mr. Brown” came in with his soft approach and gained the respect of the clan. Then came along “Mr. Smith” The missionary with the black and white, hard handed approach. It was this iron fist that was the last straw for this clan. Okonkwo, the respected leader couldn’t take any more. After helping burn down the church and killing a messenger he hung himself. A sin in both worlds, but the only way out for a man trapped between them. In Desai’s novel, “Clear Light of Day” we see the same tensions. But unlike Achebe, Desai weaves them lightly in and out of the story. In this tale, Bim is much like Okonkwo, trapped between two worlds. We have the story of two sisters and a brother, all intertwined but each with their own path. The brother Raja in his world of poetry and heroism, but never venturing into a bold new path, preferring to follow the paths of others. “She had not realized that Raja’s ambitions were so modest and unassertive. Far from playing the hero, he had only worshipped the heroes of his youth. Since he had set about imitating them and deriving from them…” The other sister, Tara, moving into a life of the sophisticated, is ironically rooted in a traditional role of an Indian wife and mother. This is a great contrast against the main character, her sister Bim. This sister is pulled between the traditional and the modern. Bim could have married the Doctor that took care of Raja and the aunt, but she was petrified of going down that “traditional” road. Every encounter with this Doctor was fraught with tension. “Oh I don’t know cried Bim in a panic….” and when he asks her to come see his mother, “this was worse than anything she had feared.” Bim went on to get a degree and teach. Just taking care of her retarded brother and supporting them both. Independence in a country where women are usually married in their teens. She was the leader when she was in school and remained a leader in her family, even to the men. For example, Tara’s husband: “…and gave her [Bim] an approving look. He had always admired Bim, even if she infuriated him often.” This was mentioned several times in the novel. Bim was the transitional soul, always being pulled in both directions, moving her forward “look Ma a woman [Bim] is smoking !” and keeping her rooted at the same time, “Bim has Baba to look after… But even this simple act has its overtones, “…she has always liked to rule others…” In both of these novels the main characters have to be strong to deal with the tides between tradition and modern culture. Their lives are not easy, but while reading about them, maybe we can make it easier for others to live in our world and understand those who do not wish to make the journey of “progress”. Failing that, maybe we can at least understand our own journey through this jumble we call life. 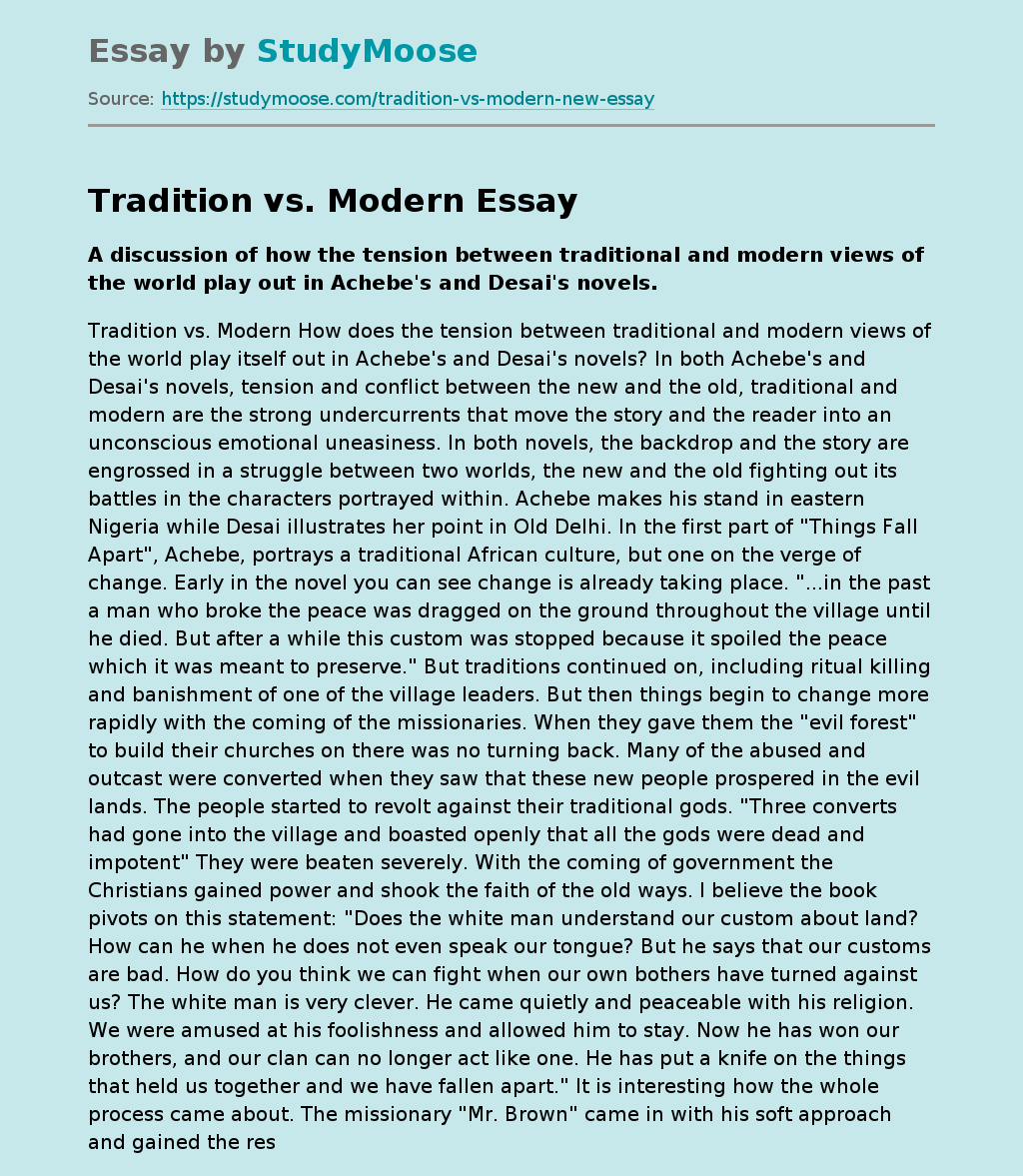