Purpose of Colonization and Colonial Modernity

Colonization is the process through which one nation asserts its sovereignty over another for the following reasons. This process is both a mental and physical process that affects both the colonizer and the colonized. The first reason mentioned here for a nation to pursue a policy of colonialism is economic incentive. The imperial state could require more resources to continue its growth. Military incentives are another reason for nations to establish a colony as was observed during the peak of colonization, where matters of national security were paramount and it was a race to gain resources of all types to display a states might and power.

Don't use plagiarized sources. Get your custom essay on
“ Purpose of Colonization and Colonial Modernity ”
Get custom paper
NEW! smart matching with writer

The last reason for imperialism stated here is social incentives. In the social sphere of colonialism, colonizers claimed to bring modernity or “civilization” to the so-called “savages” through political technologies, missionaries, educators and etc. I define colonial modernity here as the colonizer’s policy of using a combination of rational thought, european liberalism, capitalism and technology to enact reforms in the traditional,so-called barbaric and unenlightened states of pre-colonial India, Algeria, and Egypt.

Despite the colonizer’s claim to bring freedom, equality and rational thought to their South Asian and the Middle Eastern colonies I argue that colonial modernity was based on the exploitation of human differences such as age, gender, race, caste, class and tradition through the colonizers establishment of new social, political, and economic hierarchies that clashed with the pre-existing traditional socio-cultural structure of order.

The cases I will use to support this claim in South Asia are British India’s issue of the land-tenure system that established a new class hierarchy of landowner and tenant and the British handling of the controversial Hindu religious tradition of Sati that classified women as a weaker gender in comparison to the Hindu men, .

In regards to the Middle East, I will first use the issue of the Egyptian Islamic school of learning that in comparison to the static, uniform and disciplined European education system was labelled as barbaric and ineffective due to its traditional cultural focus on repetition and movement.

The next case study I will use to support my argument is the Israeli claim that Yemeni Jews are “Natural workers” due to their docility and unargumentative nature . The final case i will use to support my claim is the transformation of male and female gender roles in French Algeria . The examination of these new labels and categories will help us understand the effects imperialism had on the colonized .

The British attempted to push colonial modernity onto their Indian subjects through attempts to divide their loyalties between neighboring tribes and chiefdoms, removing their independence and etc. For example, Kaushik Ghosh states in his publication, “This relationship between the hills and the plains started to change with early British attempts… at destroying the autonomy of the hill polities … through the employment of a variety of factors, including conquests… y a well-organized colonial army, efforts at creating divided loyalties among the hill chiefs, and the rapid transformation of the hill societies through the enforcement of vastly alien land tenure systems… ”. As this quote shows, the British desired the division of the diverse mountain people of India into groupings that were new and unknown to them to sow discord and confusion among various mountain peoples leaving no room for an organized effort to resist the British and their attempts to bring “modernity” to them.

This had the intended effect of slowly degrading the pre-existing social structure and traditional economic system established by the chiefdoms and made way for capitalism as Ghosh states in his article that this land-tenure system had the effect of creating a market for the sale and purchase of land. As the process of breaking down the pre-colonial socio-economic and political structure went underway through the establishment of a market , more and more aspects of capitalism such as rent-seeking, and profit-maximization were integrated into colonial subjects of India.

The fruit of this became apparent as the land tenure system eventually led to the creation of a new class hierarchy. This new class hierarchy consisted of wealthy landlords and poor peasant farmer tenants due to the newly emplaced system enabling landlords to slowly increase their profits and eventually lead their tenant farmers into becoming totally dependent on them and even into poverty due to their inability to pay off their heavy debts.

This shows that through the British stablishing a new social, political, and economic hierarchy on the hill people that clashed with the traditional social, economic,and cultural structure of order, it enabled the colonizer to exploit the class differences among the hill people to make them unable to hinder their progress in colonizing India. Religion, traditions and gender were other areas that were utilized by the British to advance their colonial modernity in India. For example, the ritualistic suicide of widows by joining their deceased husbands on their funeral pyres was a Hindu custom that brought contention.

For the British the act of Sati and Hinduism in general was a topic where the British favored the religious scriptures, especially the older scriptures, and the male Brahmin pundits. The British at the time felt it was their “civilizing mission” to bring back true Hinduism back to Indians due to the following reasons. The first reason according to Lata Mani is that, “The British saw themselves as resurrecting an ancient tradition that had been interrupted by the corruption of preceding centuries … . In the minds of the British the so called corruption arose due to the “… truth of the traditions… had been interrupted by the Islamic interlude. ” . Despite the act of Sati being a custom undertaken by widows, the official discourse on the subject was centered on “… what constitutes authentic cultural tradition”. Most of the time the British officials viewed the women that practiced Sati as, “… either pathetic or heroic victims.

The former were portrayed as beaten down, manipulated and coerced; the latter selflessly entering the raging flames oblivious to any physical pain. ”. The excerpt from Lata Mani’s article shows that even though women were seen as a “tender child” who needed their civilizing hand to guide them and protect them from the coercive attempts from the “… barbarity of Hindu males… ”, the British conditionally allowed the act of Sati to continue after being convinced through selective consultation and interpretation of religious scriptures by Brahmin pundits.

Through the analysis of the Sati issue i have shown that the British exploited differences in gender and Hindu traditions through the establishing a new socio-political hierarchy by placing a higher importance and value on Hindu religious customs and scriptures over the issue of gender equality and women’s rights . The first case study regarding the Middle East analyzed here is the difference between the Islamic religious schools of learning in Egypt which was characterized by loud sounds and constant movement and the silent,obedient,disciplined and static European system of education based of the Lancaster model.

The Lancaster model was generally accepted as the education standard throughout Europe contained Victorian values such as silence and stillness in the classroom, and lastly uniform structure and discipline in classes. This was in stark contrast to the the style of learning in the Islamic religious schools of learning where students study the Quran through the use of so called “barbaric” methods. These methods consisted numerous students on the floor largely unsupervised and uncoordinated chanting scriptures while constantly rocking back and forth to help students understand the religious teachings.

This excerpt from Timothy Mitchell’s publication, “the students, lacking all direction, move haphazardly from professor to professor, passing from one text to another, understanding nothing of passages on which the masters comment in a language about which they have no clue, and ending with everything confounded and confused” clearly describes the attitude the British had towards the traditional system of learning which they claimed only fosters memorization rather than comprehension.

The British through their policy of labeling the Egyptian religious system of education as barbaric and unenlightened due to them placing a greater emphasis on static and silent comprehension, uniform obedience and discipline and later enacting reforms to modernize the so-called disordered and ineffective traditional religious system of education supports my argument that the British through their attempts to bring modernity in Egypt was based on the exploitation of differences in education traditions through the colonizers establishment of new social hierarchies clashed with the pre-existing traditional socio-cultural structure of order.

The Israeli argument being that idealistic were better prepared for city life whereas Yemenite Jews being natural workers due to their docility and hard work ethic. This excerpt from Shafir’s article defines a natural worker as, “a person capable of performing hard work, living in uncomfortable circumstances, somebody obedient who does not challenge the yoke of the employer, and above all content with little. ” .

This supports my argument that the colonizer, here being Israel, through its attempts to bring modernity was based on the exploitation of differences in race between Yemenite Jews and Israeli Jews , and class as Yemenite Jews were treated as second-class citizens through the colonizers establishment of new social hierarchies clashed with the pre-existing traditional socio-cultural structure of order of employing Palestinian Arabs to meet their labor needs . The final case i will use to support my claim is the issue of gender roles and equality in French Algeria.

The colonizer, here being France , through its attempts to bring modernity in terms of gender equality was based on the exploitation of differences in gender roles between Algerian and French men and women , and Islamic tradition of Algerian men and women being restricted from freely interacting without having to observe strict social etiquette through the colonizers establishment of new social hierarchies that clashed with the pre-existing traditional socio-cultural structure of order of Algerian men and women following strict Islamic laws on male and female interactions.

This paper has described the way colonial modernity was based on the exploitation of human differences such as age, gender, race, caste, class and tradition through the colonizer establishing new social, political, and economic hierarchies that clashed with the pre-colonial traditional socio-cultural structure of order using South Asian and Middle Eastern case studies . The analyzation of these cases are crucial to understanding the process of colonization and decolonization as a process of not just economic exploitation and military domination, but of the domination and exploitation of the mind and body of the oppressed.

Purpose of Colonization and Colonial Modernity. (2016, Oct 07). Retrieved from https://studymoose.com/purpose-of-colonization-and-colonial-modernity-essay 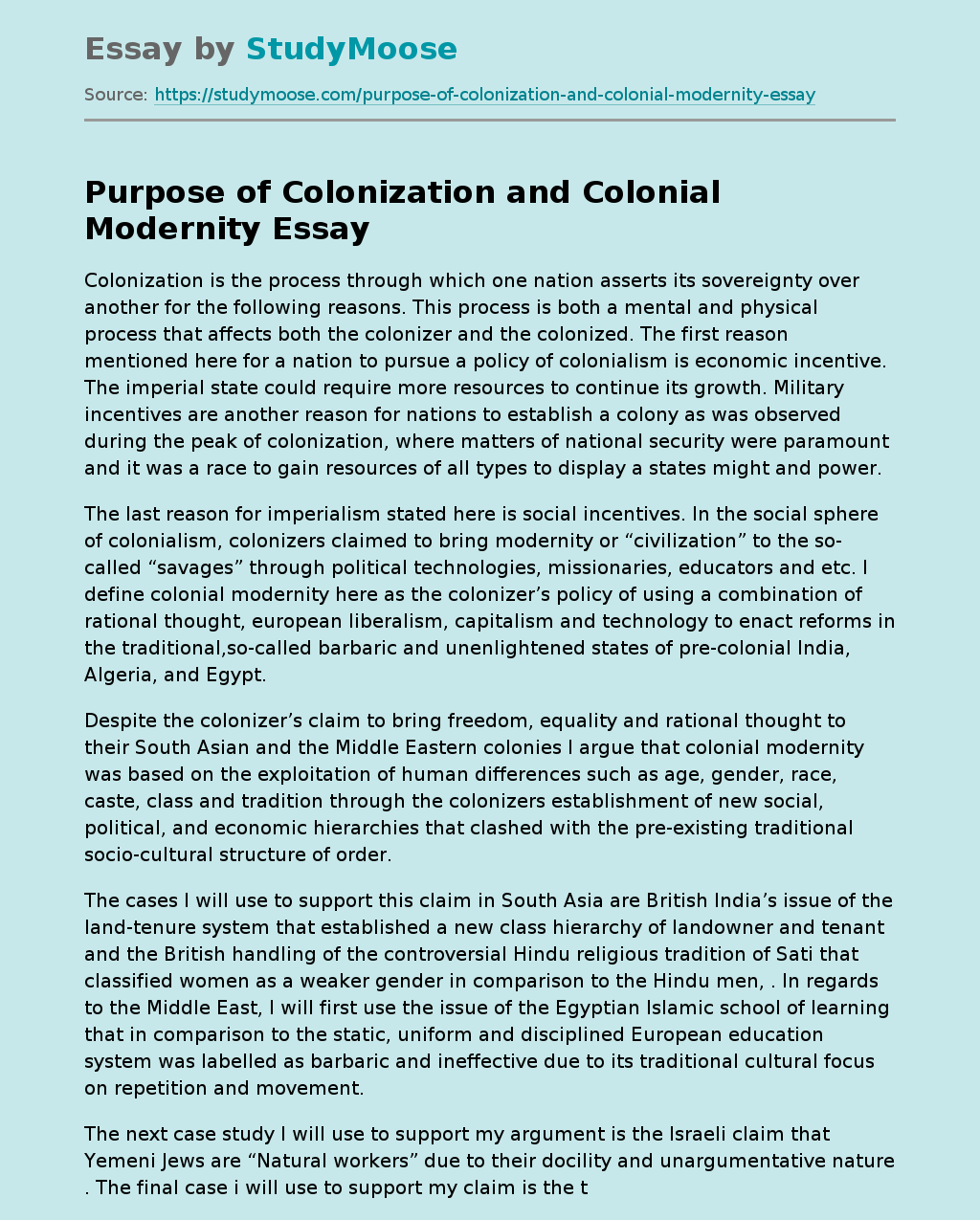