Turn in your highest-quality paper
Get a qualified writer to help you with
“ Touch Football Fitness ”
Get high-quality paper
NEW! AI matching with writer

There are six players from each team on the field at a time.

The six players are split into positions that consist of two middles, two links and two wings. The middles are positioned in the centre of the field, between the two links. These players must be fit with excellent communication and ball skills. They also crease opportunities for the outside players, (SportingPulse, 2013). The next position is the link. Links are positioned between the middles and wings. They are the most deceptive runners with the best ball handling skills.

They have good anticipation, acceleration and evasive skills, (SportingPulse, 2013). They also need to be able to communicate and have good spatial awareness to keep everyone aligned in defence. The last position is the wing. They are positioned on each side of the field, outside the link and near the sideline. Wings are expected to be the fastest players on their team. The wing position seems to be the easiest position on the field in terms of workload, (Touchdump, 2011). Fitness has many meanings and therefore is broken into components or parts to describe the different types. Fitness components can be split into two categories, health and skill related. Health related fitness components include aerobic capacity, muscular strength, muscular endurance, flexibility and body composition. Skill related fitness components are muscular power, speed, agility, balance and co-ordination.

Fitness testing is important, as it identifies strengths and weaknesses, gives you feedback about the effectiveness of training, provides training incentive, identifies specific attributes necessary for the sport, such as speed, can form part of a selective process, assesses recovery from injury and it can be used as a part of talent identification (Amezdrox, G. Dickens, S, Hosford, G. and Davis, D. 2012). Fitness components used in touch football include aerobic capacity, muscular endurance, flexibility, muscular strength, agility, speed, balance and coordination (see appendix 1). All of these fitness components have a significant importance relating to the game of touch football. A series of fitness tests were completed (see appendix 1) to investigate my suitability to a certain touch football position. These tests were chosen based on their importance to touch football ane were all relevant to what was being investigated. Aerobic capacity is the ability to keep undertaking tasks relating to the whole human body for extended time frames, where oxygen is supplied easily and effectively to help muscles so they can produce the energy to keep proceeding, (Amezdrox, G. Dickens, S, Hosford, G. and Davis, D. 2012).

Aerobic capacity was tested by performing two tests, the multistage fitness test and the 12 minute run. This test involved running continuously between two points that are 20m apart from side to side. You have to make it to the other side before the beep. If you make it you get to continue on, otherwise you have to stop on that level. My rating for this test was excellent, (see appendix 1). This test showed which players would be more suitable to the middle position, as they are fitter. It is also specific to the nature of touch football, due to the short sharp turns. The second aerobic capacity test we completed was the 12 minute run. For this test we had to run for 12 minutes trying to complete the maximum distance we could. My ratings for this test were good, (see appendix 1). These tests can be related to touch football, as touch football requires aerobic fitness because players need to be able to last a 40 minute game of continuous running. Even though in touch you have a number of subs, you are continuously subbing on and off. You do not get much rest, as the game is very vigorous. Aerobic capacity is mainly for the middle position in touch football, as they have to run a lot more during the game and are the fittest players on the field, (SportingPulse, 2013). Muscular endurance is being able to work a muscle or muscle group for a long period of time at less than maximum effort, (Amezdrox, G. Dickens, S, Hosford, G. and Davis, D. 2012).

Muscular endurance was tested by completing a sit up and push up test. My rating for the sit up test were super and for the push up test my rating was excellent, (see appendix 1). These tests were chosen instead of others because if you have a strong core whilst playing touch football, it is seen that you can perform better and this is what these tests work on, (Touch Football Australia, 2013). Muscular strength is a measure of how much force your muscles can exert. We performed a muscular power test to determine our strength. My rating for this test was excellent, (see appendix 1). The muscular strength test is suitable to touch football, as you need to have muscle strength when you pass the ball, reach out and touch the opposition, when dummy half reaches to the ground and throws the ball on and muscular power in your legs for side steps. Muscular endurance and strength work together to produce quality performance and cannot be trained or played in isolation. Since touch football requires a lot of short and powerful bursts of power and periods of short recovery, athletes must have both muscular strength and endurance to resist fatigue, avoid injury, and last longer in the game, (Ng, Nick 2010).

Flexibility is the ability to stretch a muscle so that a joint moves more freely and the range of movement as the joint increases, (Amezdrox, G. Dickens, S, Hosford, G. and Davis, D. 2012). Flexibility was tested by performing the dynamic flexibility test. My rating for this test was poor, (see appendix 1). Flexibility is also very important for the game of touch football, as it prevents injuries, improves your range of motion, bodily movements and posture, (MindBodyGreen, 2013).Without flexibility you would suffer from numerous amounts of tear and strains, much more readily during sport activities than flexible muscles, e.g. touch football players who have short hamstrings or players who do not stretch their hamstrings often pull these muscles whilst running forwards and backwards during the game. Without flexibility you could also produce bad body posture, e.g. tight pectorals can cause a cramped chest and round shoulders, shortening the distance you can throw the ball in touch and how good your pass will be. Lastly, without flexibility you can produce health problems, e.g. tight hip flexors can pull on the lumbar vertebrae, producing lower back pain, which will result in your game play, probably putting you out for a while, (Amezdrox, G. Dickens, S, Hosford, G. and Davis, D. 2012).

Agility is the ability to quickly change body position or direction of the body, (Amezdrox, G. Dickens, S, Hosford, G. and Davis, D. 2012). Agility was tested through the glycolytic agility test. My rating for this test was average, (see appendix 1). Agility in touch is important because it helps you run fast and make a quick touch, then quickly get back on side. It also helps with stopping and starting which requires good basic strength. Without adequate leg strength and agility there is a limit to the quality of the movement which will significantly affect the ability to train (Touch Football Australia, 2010). When playing touch football you use agility when you stop to catch a ball, start to run, swerve around the position and change direction. Speed is the ability to move quickly across the ground or move limbs rapidly to grab or throw. Speed was tested by performing a 40m sprint. My rating for this test was excellent, (see appendix 1). Speed and coordination are related to agility, as Agility is being able to change direction without loss of coordination, balance or speed, (Touch Football Australia, 2010).

Speed is connected to touch football when you are sprinting to score a try, sprinting to catch an opposition player and also to get back on side. Speed is significant to a wing position, as they are the fastest of the field and need to have a lot of speed to score a try, (Touchdump, 2011). Coordination is the ability to move two or more body parts under control, smoothly and efficiently. Coordination was tested by doing an alternate hand rebound test. My rating for this test was good, (see appendix 1). Coordination is needed for all positions in touch football to help your nervous system and your muscles to work together, so that you can perform specific movements smoothly and accurately, (Amezdrox, G. Dickens, S, Hosford, G. and Davis, D. 2012).

Examples of coordination in touch football are hand-eye coordination whilst catching and passing the ball and touching an opposing player. Also foot and leg coordination whilst running up (forwards and backwards) the fields and back on side. Balance is the ability to stay upright or stay in control of body movement. Balance was tested through the stork stand test. My rating for this test was poor, (see appendix 1). Balance is suitable for all touch football positions and is very important for when you are playing a game, as it helps you not fall over when you are running. It is also important when you change directions, suddenly stop or run backwards to get onside. I believe that I am most suited to the ‘link’ and that would be my strongest position because I have great aerobic capacity, great explosive speed and I’m very well balanced. I may not be seen to be very flexible however, I can change directions very easily and fast and I have good hand-eye coordination to take passes on the run.

I have the appropriate skills and ability for an overall demanding position. A link is said to have good anticipation, acceleration and evasive skills, (SportingPulse, 2013) and I believe I have these. I have spatial awareness and the ability to communicate with the wings and middles to keep everyone aligned in defence. At the conclusion of this essay, it is seen that my strongest touch football position would be link. A serious of tests on different fitness components were conducted, showing their connection to touch football (see appendix 1). This essay evaluated the different fitness components and analysed their relevance to touch football. Based on the different results, such as having a good cardiorespiratory endurance but also having very explosive speed, explains why I should be a link rather than a wing or middle. 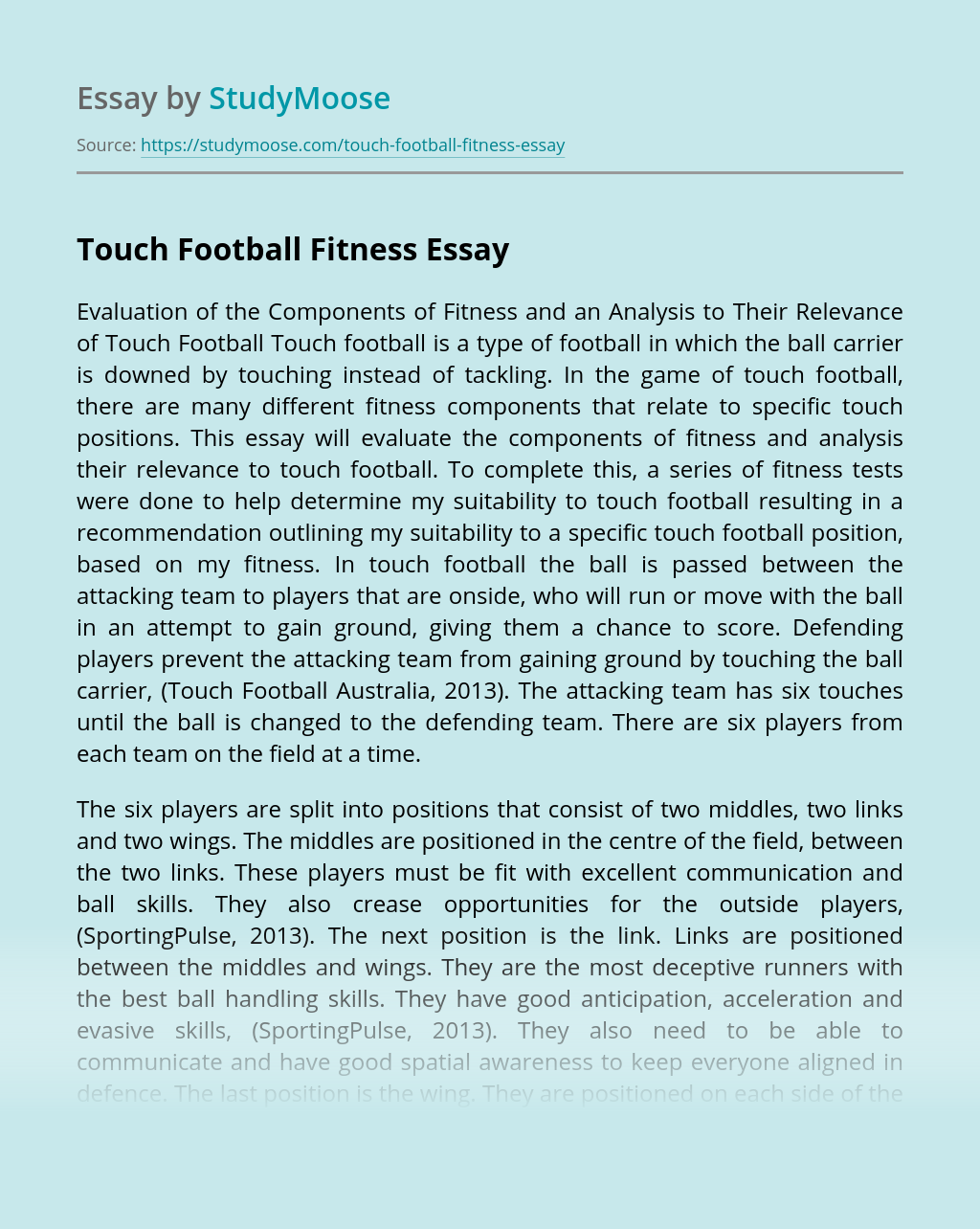 Turn in your highest-quality paper
Get a qualified writer to help you with
“ Touch Football Fitness ”
Get high-quality paper
Helping students since 2015
Stay Safe, Stay Original