1. Were the capacities of the existing facilities constrained, and if so, where? According to the case study, membership has been increasing since the opening of the club. It is stated that the growth brought complaints from members of overcrowding and unavailability of equipments. This clearly shows that the capacities of existing facilities are indeed constrained. This means that there are more members but less equipments or space for them to exercise. Complaints were mainly focused on the Nautilus, cardiovascular, and aerobics fitness area.

Don't use plagiarized sources. Get your custom essay on
“ Fitness Plus Case Study ”
Get custom paper
NEW! smart matching with writer

Based on the case study, the aerobic room accommodates 35 members per class but during peak hours when the facilities are constrained the most, 80 members per hour would check in to use the facilities. There are only 24 pieces of Nautilus equipments and 29 pieces of cardiovascular equipment (a total of 53 pieces of equipment) which is definitely not enough to fulfill the needs of 80 members who check in per hour. 2. If capacity expansion was necessary, should the existing facility be expanded? According to the case study, this facility also has recreational facilities such as racquetball court, tennis court, and a large outdoor swimming pool.

If we compare the usage of recreational facilities with the fitness facilities, it is safe to say that members use the latter more. This is proven in the case study which states that 30% of the members do aerobics, 40% use the cardiovascular equipment, 25% use the Nautilus equipment and 20% use the free weights. On the contrary, only 15% use the racquetball courts and 10% use the tennis court. The ratio of this is 115:25, assuming that 115 members use the fitness facilities as compared to 25 members who use the recreational facilities.

Therefore, it is necessary for Fitness Plus to expand their facilities. In order to do this, they can either rent or lease more equipment in order to fulfill the needs and demands of the members. Since in this case, even the space is constrained, Fitness Plus can temporarily put these rented/leased equipments in either the tennis court or racquetball court, in particular, during peak hours. Buying new equipment is not advisable as Fitness Plus does not have the financial resources to do so. This might be something to consider in the future when the business is more stable.

3. Owing to increased competition and growth downtown, was now the time to open a facility to serve that market? A new facility would take six months to renovate. However, according to the case study, the financial resources are not available to do so. In the short-run, this is not a good time for Fitness Plus to open a new facility. Since it was already May and January was a peak membership enrollment month, Fitness Plus can look into expanding the facility first instead of opening a new facility altogether.

Besides, expansion would only take four months and they can increase their financial resources before planning to open a new facility. However, in the long-run, Fitness Plus should open a new facility. This is because the popularity of health and fitness will continue to grow. Back in 1995 when the facility opened, the membership was small but after 10 years, the membership grew so much that it has to consider expansion. Since the area was growing both in terms of population and geographically, opening a new facility is a necessary step for Fitness Plus in the future. 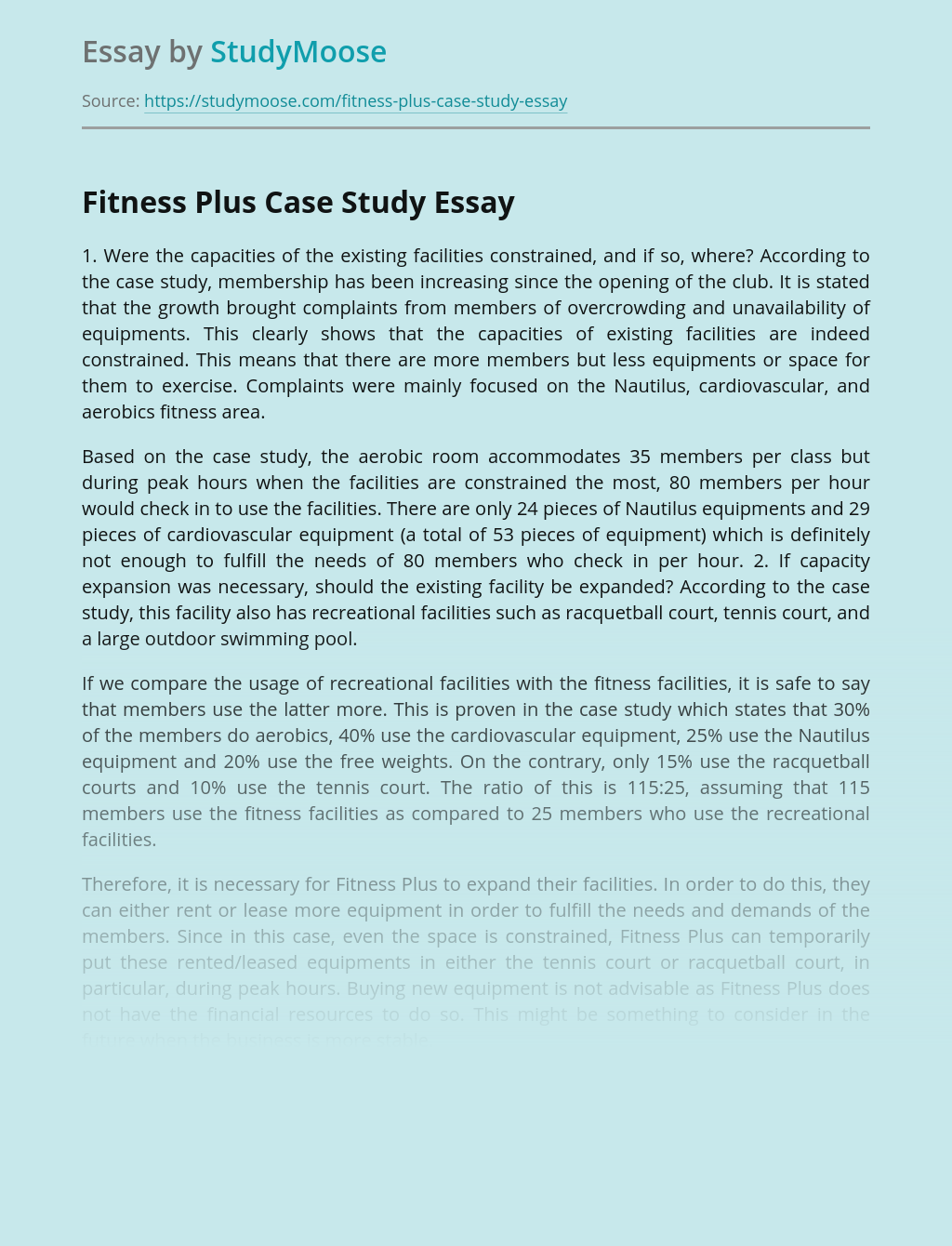