Touch football involves the use of all three energy systems which are the ATP-CP system, Lactic Acid system and the Aerobic system. ATP stores are fully replenished after 2-3 minutes or 50% can be replenished after 30 seconds. The ATP-CP system is anaerobic which means there is no oxygen present and is a result of the breakdown of creatine phosphate. It is predominantly used in activities which are high intensity and last for up to 10 seconds. There are no fatiguing by products however ATP production is very limited.

Turn in your highest-quality paper
Get a qualified writer to help you with
“ Touch Football Analysis ”
Get high-quality paper
NEW! AI matching with writer

The lactic acid system is also anaerobic however it lasts for around 90 seconds. It is the result of glucose being converted into lactic acid. Lactic acid is a fatiguing by product that builds up in the body after vigorous exercise and which force an athlete to slow or stop their activity. The final energy system is the aerobic system. This is the production of energy from the breakdown of carbohydrates and fats using oxygen. This system is used for low intensity activities of a long duration.

The bi-products of this system are water, carbon dioxide and heat however they are not fatiguing which is why the aerobic system is efficient for long duration and endurance events.

A game of touch requires the use and interplay of all three energy systems; ATP-CP, Lactic Acid and Aerobic systems. The body simultaneously uses an energy system as there are many skills in touch that are of different intensities and duration. For roughly the first 2 minutes of the game, the intensity is submaximal as player 1 is getting into position.

It can be seen on the heart rate monitor graph that there is a slight increase in heart rate indicating a small increase of intensity from walking to a light jog which can be shown in the table. The body is able work aerobically at this point as there is sufficient oxygen to meet the demands of the activity.

The heart rate monitor shows at point A that there is a steep incline of player 1’s heart rate. This was caused by a series of dodges, sprints and side which increased the heart rate at 3 minutes into the game. As these activities are of a higher intensity and in such a short space of time, it creates an oxygen deficit. Because of this oxygen deficit, the body has to now utilise the ATP-CP system. However, the ATP-CP system is only momentary, lasting for 10 seconds, and therefore its store becomes mostly used up. The lactic acid system then becomes the more dependent energy system.

5 minutes into the game the heart rate graph shows a slight plateau which indicates that player 1 was working at maximal intensity. It is only possible to work close to this threshold for a limited time therefore intensity must drop causing the heart rate to lower. Player 1 was involved in a series of sprints, dodges and side stepping as well as playing the ball and passing. These are all high intensity activities which have caused the increase of heart rate on the graph.

After the first 5 minutes of the game, player 1 is substituted off. At this point, Excess Post-Exercise Oxygen Consumption (EPOC) takes place. EPOC allows the aerobic system to replenish ATP-CP stores and resynthesises lactic acid. The first stage of EPOC is called alactacid and restores ATP-CP. This process happens quickly in just 30 seconds and is important as the ATP-CP system is very important in a game of touch. After being substituted back on, player 1 will have had full stores of ATP-CP.

The same can be said for points C and D however at point D, exercice has ceased and a full EPOC can take place. The first stage of EPOC is the alactacid component which involves the restoration of ATP and CP stores and oxygen. This process takes 2-3 minutes. The second part is the Lactacid component and involves the removal of lactic acid and replenishment of glycogen. Full recovery may take up to 90 minutes. A warm down should have been done by the athlete to speed up the removal of lactic acid as well as preventing blood pooling, allowing skeletal muscles to oxidise and to keep blood circulation elevated.

There are numerous tactics used in touch football to out play the other team which can be done by utilising each of the three energy systems. . Many of these tactics involve using the knowledge of the energy systems to an advantage. One tactic used by many teams is to run at the same defender constantly while attacking so that, that player will become fatigued and as a result, will not be able to run as fast or get back into position in time. This will open up gaps in the other team’s defence line and will create an area for a team mate to run through.

By pin pointing one player they will have to run backwards for a few plays which will last for over 10 seconds and as a result the player will have depleted their ATP-CP system. This doesn’t allow the defender to replenish ATP-CP stores before each touch, forcing them to predominantly use their lactic system to synthesise energy. The Lactic acid system produces the fatiguing by-product lactic acid which causes the player to tire. As a result the defender will not be able to respond as quickly and create a gap in the defensive line that the ruck can run through.

After performing a maximal effort as a ruck, player 1 should be shifted to the wing where less intense and frequent activity occurs. This is where positioning becomes a great tactic and will allow for the aerobic system to be predominately used to restore ATP-CP as well as resynthesise lactic acid. Following this, player one should be substituted off to allow ATP-CP stores to replenish 50%. Another great tactic is to use the substitutes wisely. When making a substitute it is smarter to make the change when your team is attacking to avoid any defensive gaps for the other team to run through. While in an attacking play, the players that are fatigued should drift closer to the bench so that quick substitutions can be made. A tactic would involve changing 3-4 players at one time to have a rested team on the field and to also confuse the opponents as to who they are defending. The players that have just been rested should have a full ATP-CP system which is beneficial to dominate the play.

5: Touch involves the combination of many fitness components, however, it is clear from undertaking a game’s analysis that some have more of an impact on the game than others. Agility is defined as the ability to change direction quickly and accurately while maintaining balance which is definitely a main aspect of the sport. A GPS tracker was placed on a student to map his running during a touch game and the results show many sharp turns and running that isn’t in a straight line. It is clear from the map of the tracking device that numerous sharp changes of directions were required during the game.

There were a total of 10 dodges, 12 sprints and 16 occasions where player 1 had to side step. All of these skills required some form of sudden change of direction. It is an essential part of touch to be able to fake one direction, causing your opponent to shift their centre of gravity, and then quickly change direction into a gap. Also, dodging and weaving in between players is necessary.

Speed is defined as how quickly a body part can be put into motion or the speed of contraction. This is necessary in touch football as a lot of fast movements and sprinting is required to keep up with play, to run past opponents or catch opponents. The game is played at a fast pace to try and catch the defenders out of position or off guard and to make it easier to get past them.

Cardio-respiratory endurance is a key component to the game of Touch as it is the capacity of your heart, blood vessels and lungs to function efficiently to deliver oxygen during continuous activity. Age, genetics, and physical conditioning all play a role in an individual’s cardiorespiratory endurance. With an enhanced ability to take in oxygen and deliver it to working muscles, the muscles are able to continue activity longer without fatigue.

6: Cardio-respiratory endurance is important in many sports and is something that many athletes should improve. Two training methods that could be used to improve this are Fartlek and Interval training. Both styles of training are useful and specific to many team sports including touch football as they are similar to the type of work done in a game.

Interval training involves alternating periods of activity with periods of rest and can be categorised by short, intermediate or long interval training. Short interval training develops power, intermediate develops lactic acid tolerance and long develops aerobic power. To target the ATP-CP system the work to rest ratio should be 1:3/1:25, to target the Lactic acid system it should be 1:2/1:3 and for the aerobic system it should be 1:1. Fartlek training is considered to be a mixture of interval and continuous training. This is achieved by doing a continuous activity and incorporating random bursts of speed or increase of intensity.

Both types of training should incorporate the training principles which include progressive overload, variation, specificity, individuality, recovery, diminishing returns, frequency, duration, intensity and reversibility. Progressive overload is the concept of gradual increasing the demand to make improvements. If the training load remained unchanged, no further improvements in fitness would occur. This can be applied to fartlek training and interval training by increasing the number of times an activity is done or at what intensity it is done.

For example if the fartlek training was to jog for one minute and sprint for 5 seconds, the spring can be increased to 10 seconds. In interval training the repetitions could be increased. Variation should be included into both training methods to not only make improvements in fitness, but to also to ensure the athlete remains psychologically focused and motivated. To ensure maximal improvement is achieved by the individual, all principles should be considered when creating a training program. 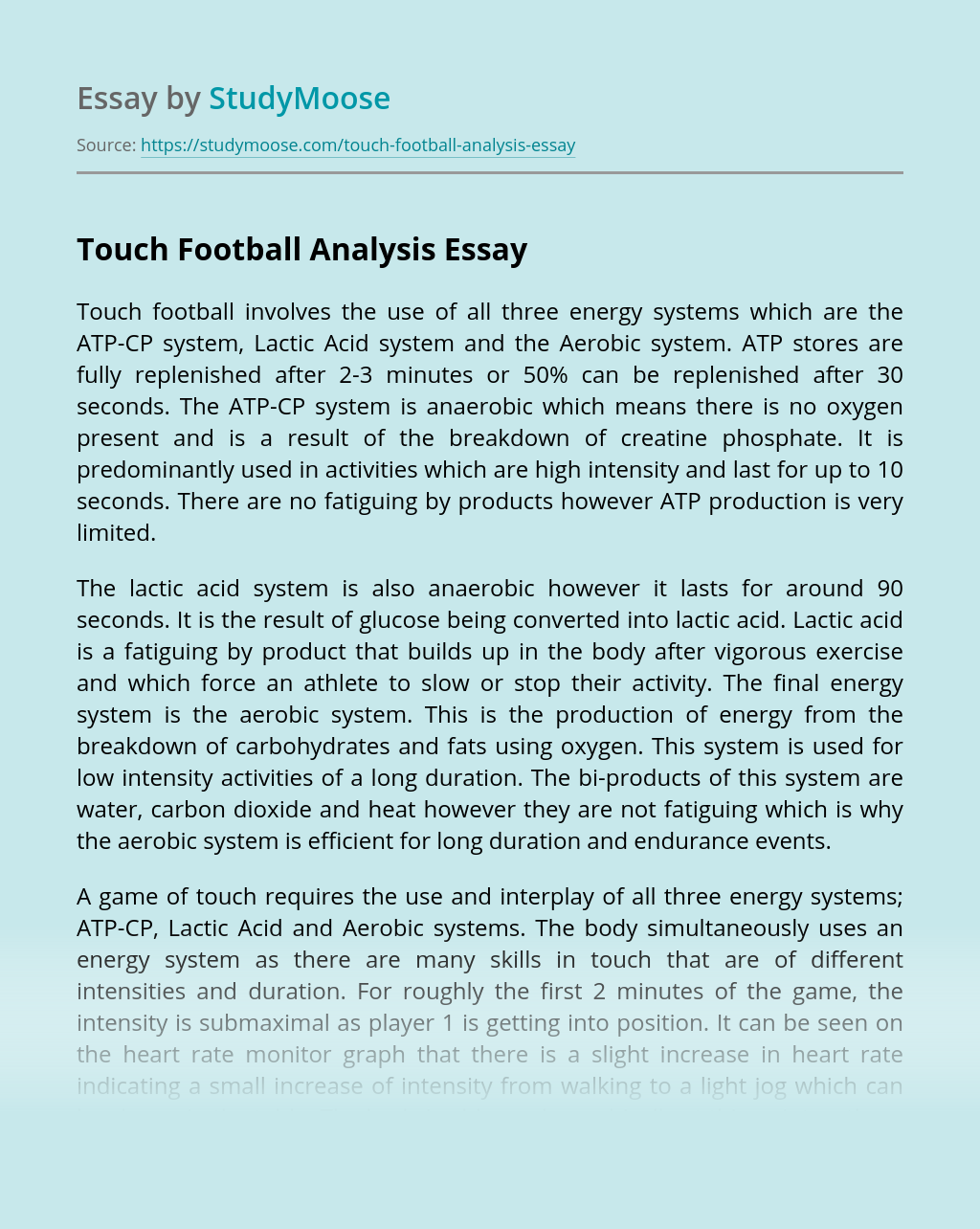 Turn in your highest-quality paper
Get a qualified writer to help you with
“ Touch Football Analysis ”
Get high-quality paper
Helping students since 2015
Stay Safe, Stay Original