Tom and Jerry is a classic cat chases mouse plot. As a little kid you see all of these types of shows in a different perspective but when you actually view them with an adult mind set, you start seeing these subliminal messages that some people may find offensive or disturbing. Tom and Jerry is a typical show with basic stereotypes of different cultures for a mere laugh. While these may seem harmless and unintentional, they implant a non-focused picture of what a real life person, of this designated group, may look like.

Don't use plagiarized sources.
Get Your Custom Essay on Tom and Jerry Just from $13,9/Page

For example, the racism in “Tom and Jerry” is often shown when a character gets too close to an explosive, it goes off, and he turns up in blackface with big red lips. As I watched the show, not only did I notice some racism, but in the episodes seen, there were almost no female characters.

If one did happen to pop up, it was to infatuate Tom or Jerry and distract from their current objective or purpose.

Obviously if the female did catch their attention so easily, they had to be attractive in a way, but in the cartoons, they’re attractive in every way! They was much sexualized with their red lips curling and spidery eyelashes incessantly batting as Tom and Jerry competed over them. They are skinny as all could be and had the body of a Victoria Secret Model, the perfect woman in short terms. It’s ridiculous the way the males obsess over the females in old cartoon shows, but who can blame them?

This gives the youth mind the intention that if a girl is to be attractive, she has to be drop dead gorgeous close to a goddess. and sadly, that’s the way beauty is interpreted now a days and it is not going to change for a long time. The non-sexualized female in Tom and Jerry would be the African American woman, Mammy Two Shoes, as she is referred to. She usually appears headless, from the chest below, with a pink apron and slippers on. She’s fat and not very attractive, stereotyping that the women who are ugly are more maids and servants who cook and clean, rather than regular women who have jobs and have a life basically.

The Native American stereotype is also in Tom and Jerry. In the episode “Two Little Indians”, they both belong to different tribes and live in tents while having a little fire burning outside. Ironically enough, its Thanksgiving while this episode is going on so both Tom and Jerry go out to the wilderness to hunt for a turkey and bring it back to their tribe as an
honorable sacrifice and superiority over the other. They wear their authentic Native American headwear, while their faces are painted with symbols describing they belong to each other’s tribes. They yell out a certain scream, initializing that Tom and Jerry are at “war” with each other.

They use weapons such as combat axes, tomahawks, bows and spears and yell every time they are going to attack. They also yell when wanting to celebrate as when Tom finally captures a turkey to eat. Jerry also stereotypes an old saying in this episode. “Brains over brawn”, since Jerry is at an disadvantage because of his size compared to a turkey, he lets Tom capture it and then tricks him into taking it to Jerry’s tribe instead of his own.

He utilizes his brain and praises Tom for being “such a wonderful hunter”. While he does this, he’s the one who’s leading Tom home and leads him to his own tribe where an ambush is waiting. Tom doesn’t realize this because he’s too busy accepting the compliments Jerry is giving him. Of course these characters don’t really talk but you can tell this is what Jerry is doing because of his hand gestures and body language during the trip home. Butch is the last example of stereotyping seen in Tom and Jerry. Butch is a black alley cat who is also the leader of the alley cat bullies who usually help Tom catch Jerry.

In other situations, he’s found looking for food in garbage cans and lives in a cardboard box. Since he is part of a gang and poor, he also steals to keep himself on his feet. In one episode, he steals a pie that Tom’s owner makes and Tom gets blamed for it. So I guess you can say he is an antagonist but also an ally to Tom, though in other episodes is his enemy because they both compete for Toodles Galore, the main attractive female in the series.

They both fight along Jerry to try to impress her, most of the times she gets bored and ends up leaving with no one but herself. Butch is a character who is there to add insult to injury, he messes with Toms plans to capture Jerry for them to backfire on himself and he loves the chaos he creates. He feeds off of it. Butch stereotyping that blacks are poor, homeless, mean people when that isn’t the case at all but it’s the way it runs in the show.

Although I did end up realizing these things in the show, I think it’s all for the laughs. When watching “Tom and Jerry” on DVD, a disclaimer appears on the screen in the beginning informing the viewer that while some episodes show racial stereotypes, they have not been censored because editing them out would be denying the racism ever happened which is worse than showing it and this is very believable. A lot of people in this world take stereotyping and racism too seriously and end up fighting a losing battle. Focusing on racism/stereotyping will not let the viewer enjoy any type of entertainment. 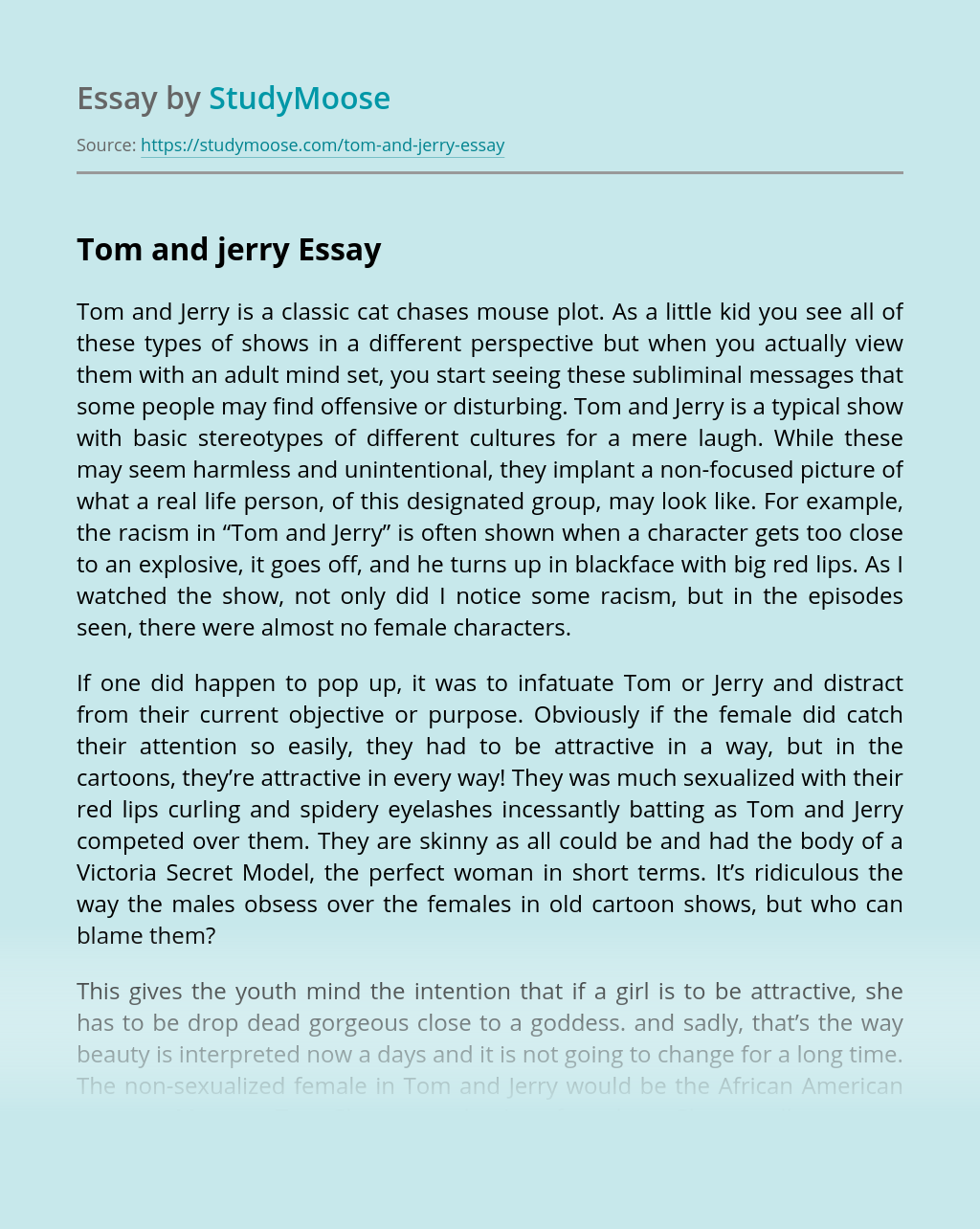 Features: High Speed Travel and Tour arrange all types of domestic and international travel, from hotel and resort accommodations to air and ground transportation, including car rental needs and tour packages. Also provides individual and group travel to leisure and corporate clients. Services and products provided by High Speed Travel and Tours include travel consultation,...

Compare and Contrast with Marius

During the course of students’ educational careers we come across many assignments that require us to write an essay on a specific topic in which we use different writing methods and steps to develop a completed paper. To help students with their writings, Richard Marius, a very educated and well known writer has written an...

Why should animals be treated with respect?

Human beings and animals always had an important relationship. Animals were created to provide us with food and guide us when we had problems. In that story the animals help the man find the food and he has to share it with them in return. They also helped him find his way in the forest....

Introduction In order to complete this task I will be identifying the visual merchandising and display techniques used for three retail outlets. The three organisations that I will be working on throughout this assignment are: 1. Hollister 2. Hamleys 3. The Body Shop Visual Merchandising – This could be defined as the way in which...