The major societal issue of gender stereotypes has been an

The major societal issue of gender stereotypes has been an ongoing, prevalent conflict for hundreds of years, including in today’s generation. Men have almost always been considered superior to women. Even though equal rights amongst the sexes were established in the United States. decades ago, women are still viewed as inferior to men in the workplace and at home. Mark Twain’s Extracts from The Diaries of Adam and Eve introduces the stereotypical portrayal of both genders through each individual’s personal perceptions.

Don't use plagiarized sources. Get your custom essay on
“ The major societal issue of gender stereotypes has been an ”
Get custom paper
NEW! smart matching with writer

He illustrates their contrasting views of each other and the world around them by utilizing Adam and Eve’s separate diary entries. In these entries, Adam and Eve both fall into the stereotypical role for their gender and have entirely different opinions on the events they experience together. Twain’s choice to organize the piece as diary entries from both Adam and Eve’s point of view emphasizes the themes of perception and the presence of gender roles.

The theme of perception is evident in Mark Twain’s version of the biblical Genesis story. In the original story of Adam and Eve, their personal perception of the Garden of Eden is never explored, and their experiences after being banished from Eden are never mentioned. There are many examples of “the first telling of human experience within the Bible and since similar myths exist in other cultures, this story is likely to point to ‘significant truths about psychic functioning'” (Hunt 34). The story of Adam and Eve points towards certain aspects of human nature, and Twain’s retelling also follows the same dynamic as the traditional creation story.

The difference in Twain’s retelling is that in his piece, both the traditional story and the opinions of Adam and Eve are explored, adding a different perspective to the biblical narrative. In the original creation story, Eve is weak-minded and convinced to take fruit from the tree by an evil serpent, even with knowledge from God that she was never to do so. In Twain’s version, Adam is grateful that Eve speaks to the snake because “the snake talks, and this enables me to get a rest” (Twain 56). While Adam considers this as his escape from communication, Eve appreciates her time with the serpent considering he can hold a better conversion than her partner, Adam. Twain emphasizes Adam and Eve’s different viewpoints by highlighting their personal opinions of one another. To Eve, Adam’s warning to not eat from the tree was easy to disregard because “he says I shall come to harm; but so I come to harm through pleasing him why shall I care for that harm?” (Twain 60). Eve perceives any harm as worthy if she is able to make Adam content, considering she is trying to befriend him. Even though she was forbidden from eating from the tree, her choice to do so not only benefited her, but it also helped Adam alleviate his own hunger. While Eve simply viewed her actions as generous, Adam was thankful for her companionship but still slightly recognized her as the reason for losing his land. Twain utilizes Eve’s generosity to alter Adam’s perception of maintaining natural human connection. While her actions and consequences are the same in the original creation story and in Twain’s story, there are different perceptions from each individual shown in Twain’s version.

In Twain’s account of Adam and Eve, their perception of each other is framed through traditional gender roles. Adam is portrayed as blind, un-empathetic, a poor communicator, and brutal. In comparison, Eve is depicted as thoughtful, sensitive, a good communicator, and friendly. For example, when Eve first joins Adam, he viewed her as a nuisance who spoke incessantly, and Eve felt he was shy, rude, or unintelligent (Twain 55). Since Adam was used to being alone with creation, he perceived Eve as an intruder and didn’t believe she had the right to be in his presence. This demonstrates Twain’s theme of gender roles considering Adam thought he was superior to Eve since he occupied the vicinity first. Twain introduces the concept of patriarchy early on in his account of Adam and Eve, which establishes gender stereotypes. However, Eve seemed to be unfazed by Adam’s dismissing attitude towards her and maintained an optimistic view of the world around her. While Adam referred to everything as a “thing,” Eve had the knowledge to name these things, which helped specify every individual object and creature (Twain 55). Even though Adam was the patriarch of the land, Eve aided in organizing of the environment to make life easier. While this is symbolic of Eve preserving her pride and fulfilling her role as a supportive partner, Adam felt Eve was overbearing and never stopped talking. Adam and Eve fall into the stereotypes for their respective genders, and these stereotypes are reinforced through their perceptions of each other. In Paramita Ayuningtyas’ “Gender Ideology in The Diary of Adam And Eve by Mark Twain,” she considers similar concepts. Ayuningtyas writes that Eve “tries to gain respect from Adam, which directly means she considers Adam as someone superior. I read this as the representation of women whose existence needs an approval from men” (Ayuningtyas 372). As a stereotypical characteristic of women in society, Twain stresses that women need to be accepted by men before they can accept themselves. Throughout Eve’s diary sections, she aims to befriend and gain support from Adam. She goes as far as attempting to take the apple regardless of the consequences because she would sacrifice herself for his happiness. Eve is selfless and kind, yet she still yearns for respect from Adam. Even though he often uninterested in giving her any attention, she continues to strive for his validation. These characteristics are shown through their perceptions of each other and fall in line with traditional negative stereotypes.

Twain was able to effectively communicate the role of perception and gender stereotypes in his piece due to its structure. The choice to structure his retelling with both of their diaries allows for a unique and effective opportunity to portray the themes of the story. The diary entries allow for readers to completely understand the perceptions Adam and Eve have about each other. Without the diary structure, readers would not know how they viewed each other or the events they experienced. Oftentimes, their actions explained less than their diary entries did, and this is also applicable in the form of their gender roles. Eve was very sensitive and took Adam’s actions to heart, whereas Adam simply did not care for Eve’s presence. When Eve was hurt by Adam’s lack of interest in her, she would spend her time with the animals instead (Twain 56). According to gender stereotypes, women are constantly seeking for companionship, whether it be a friend, family, or a significant other. Therefore, when Adam wasn’t giving Eve the attention she desired, she sought out companionship in the animals surrounding her. While Eve was seeking company by gravitating to the animals, Adam thought she was antagonizing them and believed they disliked her presence as much as he did at the time (Twain 56). In this specific situation, Twain compares their insights to prove that everyone perceives someone else’s actions and intentions differently. Without Twain’s choice to format the piece as a diary, readers would only realize that Eve enjoyed spending more time with the animals than Adam. The readers would not recognize Adam and Eve’s perceptions of each other’s experiences or the stereotypes they fulfilled due to their different levels of emotion.

Mark Twain’s retelling of the story of creation focuses on the concepts of perception and gender roles. Extracts from The Diaries of Adam and Eve focuses on Adam and Eve’s experiences in the Garden of Eden from their own personal standpoints. Twain’s structure of the narrative allowed for the recognition of how their perception of events changed their interpretations of each other and vice versa. Their perceptions of each other also align with stereotypical gender roles, where Adam was unemotional and independent, and Eve was emotional and codependent. Even though gender roles are heightened in Twain’s extracts, human connection is a natural occurrence in life, even if it’s unintentional.

The major societal issue of gender stereotypes has been an. (2019, Nov 24). Retrieved from https://studymoose.com/the-major-societal-issue-of-gender-stereotypes-has-been-an-example-essay 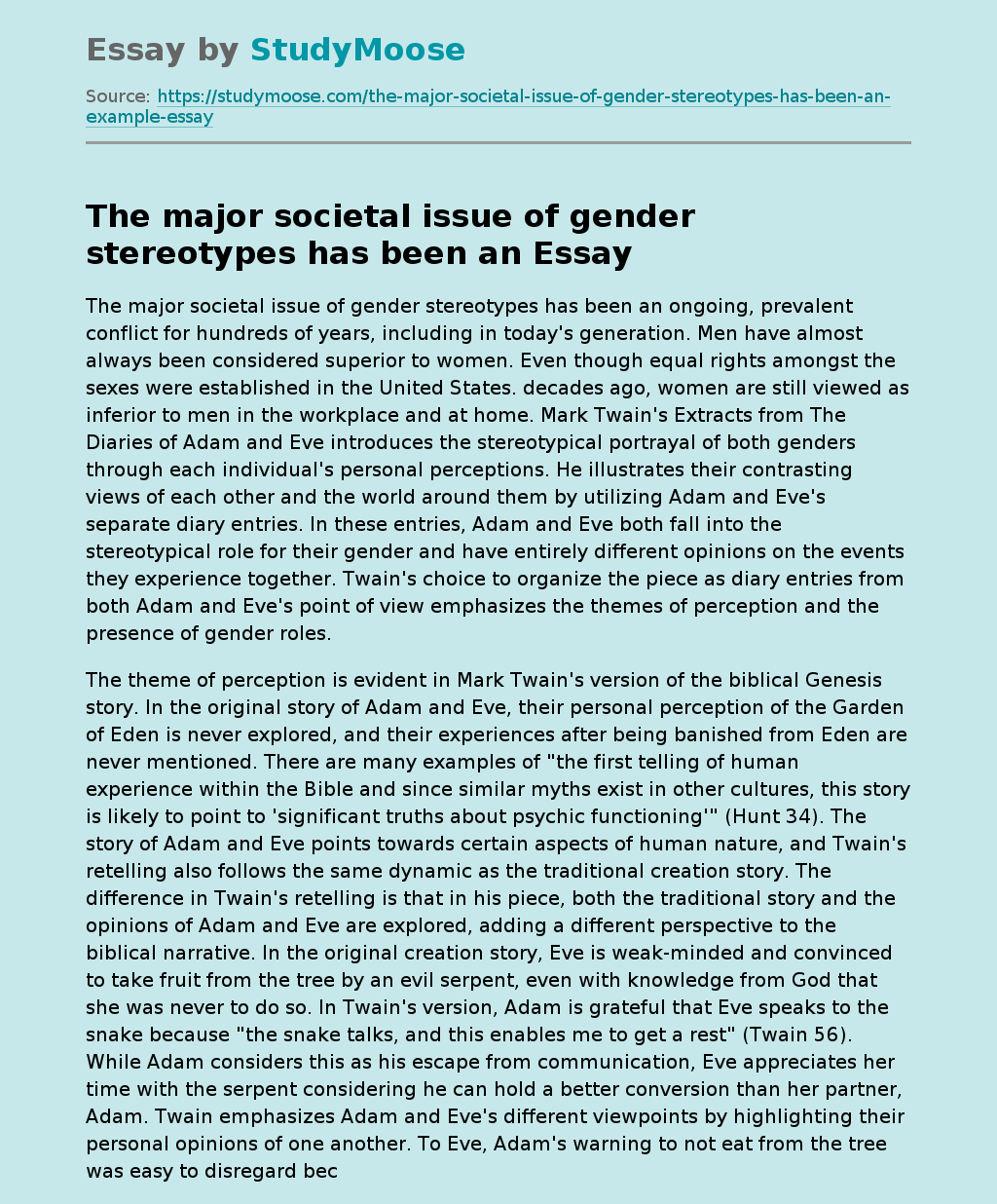