Bhutan Vs BangladeshDid you know Bhutan and Bangladesh has been sharing friendly bonds over fifty years? The two countries are geographically neighbors and the foundation for the strong relationships had been maintained by the visionary leaders of the two countries on the common aims for peace, respect and prosperity. According to a newspaper of Bhutan called Kuensel, the two countries have committed to few development partnerships including free trade, hydropower and transport recently. Moreover, the true depth of relations between the countries is characterized by the tradition of official visits by the leaders of the countries.

Don't use plagiarized sources. Get your custom essay on
“ Bhutan Vs BangladeshDid you know Bhutan and Bangladesh has been sharing friendly ”
Get custom paper
NEW! smart matching with writer

While Bhutan is just a tiny country; it has unique culture, tradition and system that make her stable and independent. On the other hand, Bangladesh has its own unique identities and the country has been undergoing rapid development. Though Bhutan and Bangladesh are unique on their own ways, they present its geography, national dress and national game in two contrasting styles.Bhutan is a small landlocked country bounded by India in south and southwest and China in the north and northwest respectively.

The country is three hundred kilometers long and one fifty kilometers wide covering an area of forty six thousand five hundred square kilometers. The country is predominantly coated with thick woods and huge mountains with deep ravines. Furthermore, seventy percent of the terrain is covered with forests, while seven percent is pressed beneath glaciers. Owing to its size, the country has 790,000 people much lesser than the people of Chittagong. On the other hand, Bangladesh is a riverine country located in south Asia bordered in the west, north and east by India.

With the total area of one hundred forty four thousand square kilometers, the country is surrounded by Bay of Bengal in the south. Bangladesh is characterized by two important features: deltaic plains and hilly regions crossed by flowing rivers. The country has sixty four districts resulting to one sixty four million people which is one of the densely populated countries in the world.One of the unique elements of the Bhutanese is their national dress. Men wear the Gho, that is, a knee-length robe resembling like a kimono that is tied by at the waist by a traditional belt called Kera. The pouch which forms in the front is considered to be one of the biggest pockets in the world. Traditionally it was used for carrying food bowls and small dagger for protection. However, in the present times it is used for carrying small things like wallets, mobiles,etc. In the same way, women wear the Kira, a long, ankle-length dress embroidered in different patterns of flowers. It is accompanied by a light outer jacket called Tego with inner layer known as a Wonju. Bhutanese wear their dresses in schools, monasteries, festivals and any more. However, in Bangladesh the men wear Kurta, a loose shirt falling either just above or somewhere below the knees. The kurta usually opens in the front and the front opening is buttoned at the top. Women in Bangladesh wear Sari, their national dress, that consists of a very long drape that is wrapped around the waist, with one end draped around the shoulder. Bangladeshi wear their national dresses on religious and cultural occasions.Bhutan embraces another approach in its national game. Archery, the national sport of Bhutan is kind of male sport but women also take part in dancing and playing as well. It consists of two long bamboo arrows and bows which is substituted by sophisticated metal bows. The men wear their traditional dress and compete with other team especially during occasions and competitions. Small wooden targets are placed one forty meters apart for archers in both the sides. Consequently, Bangladesh is known for its national game, Kabadi locally known as Ha-Du-Du. The game is played on a rectangular court divided into two parts by a white line. Seven members from two teams take part in the game. One member from the team is referred as the raider. The raider repeatedly says the word kabadi’ and tries to dash and touch the opposing members. And the opposing members should try to capture the raider and whoever is being touched are out. The teams alternate between being the raiders and defenders. Kabadi evolved from rural areas and in the present situation Bangladeshi take part in international competitions as well.Bhutan and Bangladesh is geographically a neighboring countries but it differs in many ways. Bhutan is considered to be one of the smallest countries in the world and the country is on the way to development. The country is nestled between two giant countries and the population is very less, lesser than the population of Chittagong in Bangladesh. The big reason for its independence is its dynamic culture, that is, the national dress which is strictly preserved and promoted. Furthermore, the country also preserves and promotes the national game especially played during occasions and competitions. On the other hand, Bangladesh is one of the densely populated countries in the world located near India and Bay of Bengal in the south. The country has its unique cultures and traditions that make it different from the rest of the world. Bangladeshi wears the national dress during occasions and religious rituals. Moreover, they are also known for kabadi, the national game of Bangladesh widely played across the country. Both the countries have their own unique qualities. Difference in geography, culture and tradition makes it possible to remain as an independent countries called Bhutan and Bangladesh.

Bhutan Vs BangladeshDid you know Bhutan and Bangladesh has been sharing friendly. (2019, Aug 20). Retrieved from https://studymoose.com/bhutan-vs-bangladeshdid-you-know-bhutan-and-bangladesh-has-been-sharing-friendly-essay 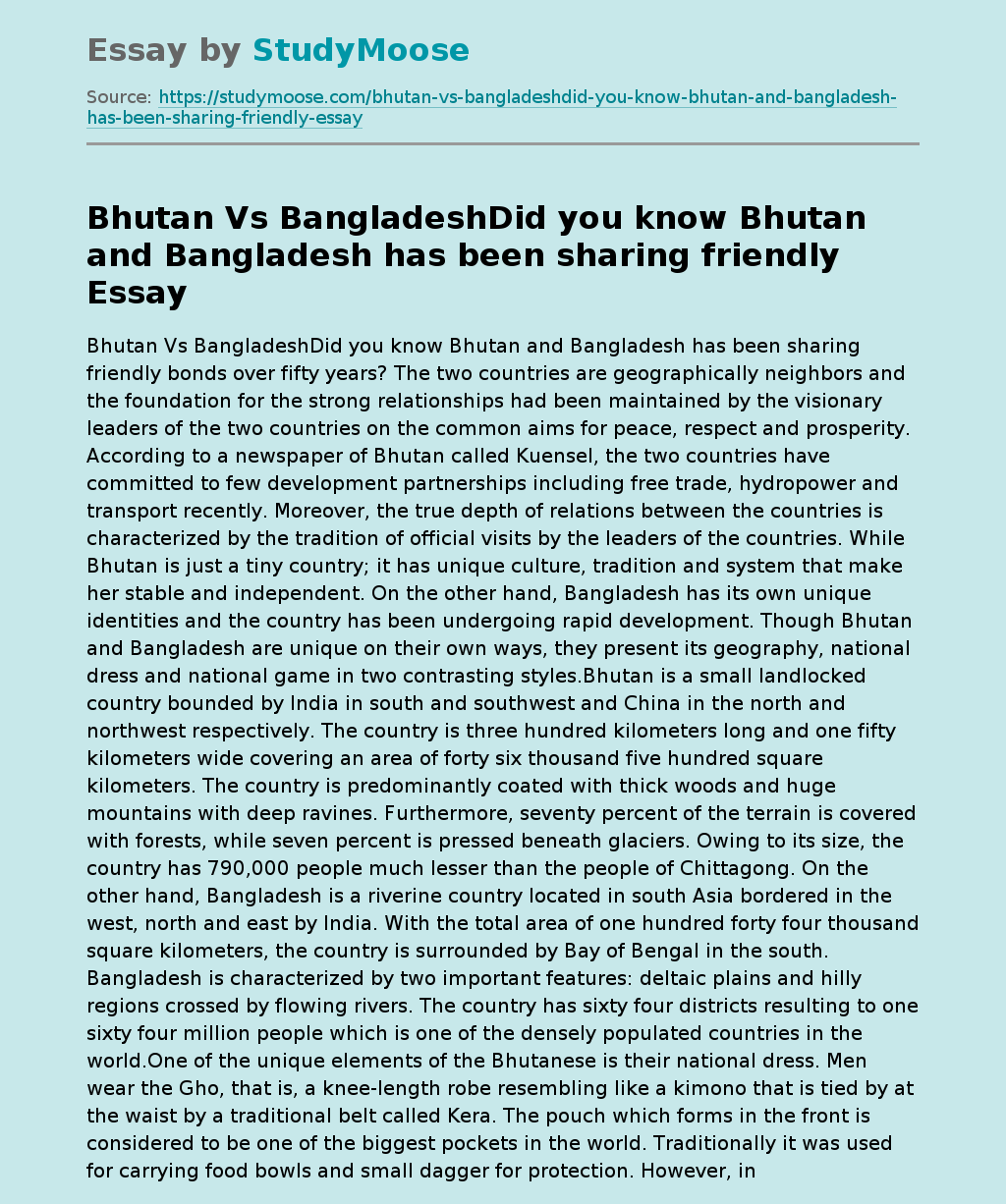