Treat the Animals Friendly to Be Friendly Treated

Humans raise, herd and slaughter countless animals each day and through history out of necessity. In many parts of the world, animal rights are far below other social agenda. There are eaten, hunted, mistreated, and used for drug trials by human beings. Even in developed countries, the issue of animal rights remains a controversy. However, the issue is emotionally, ethically and socially an imperative for human beings.

First, from an evolutionary point of view, human beings are at the top of the genetic tree, which essentially implies that we share much in common with other species.

Don't use plagiarized sources. Get your custom essay on
“ Treat Animals Friendly to Be Friendly Treated ”
Get custom paper
NEW! smart matching with writer

This commonality explains why animals also have feelings: love, care, trust, pain, and fear. Treating animals friendly brings an emotional value. Pets could accompany the elderly and the young more affectionately. Farm animals grow and die in peace, reducing the poison in the meat products. Wild animals would not attack human beings unless they feel really threatened.

Proficient in: Animals Are Our Best Friends

Treating animals in a friendly way could increase happiness at home and avoid unnecessary tragedies in the wilderness.

Second, treating animals is also ethically important. Although the ethical codes in different countries have various roots, such as Christianity, Islam, or various cultural traditions, human beings generally believe in the Golden Rule, i.e. treat others as one would like others to treat oneself. Since animals have emotions as human beings, this rule applies equally between animals and humans. It can be found that in countries where animals are mistreated, human dignity is often trampled without compassion.

Last but not least, the issue also carries social significance. As human beings dwell in the ecosphere of the Earth, it is every person’s responsibility to preserve the balance of nature. The famous concept of butterfly effect may have been exaggerated, but human invasion into nature has brought a series of catastrophes to the fauna world with far-reaching, unpredictable consequences. A primary reason of such misdeeds is that human beings did not consider animals as legitimate members of this ecosphere and deprived of their rights lightheartedly. Generations of human beings have witnessed numerous of natural disasters caused by breaking the ecological balance. Global warming, deforestation, excessive urbanization and so on are just a few examples of this long list of potential disasters.

Treating animals with indifference may not bring immediate side effects, but doing the contrary has so many positive merits at individual, ethical and social levels. Perhaps a quote is perfect to end the argument, “there is no Plan B, because there is no Planet B”. 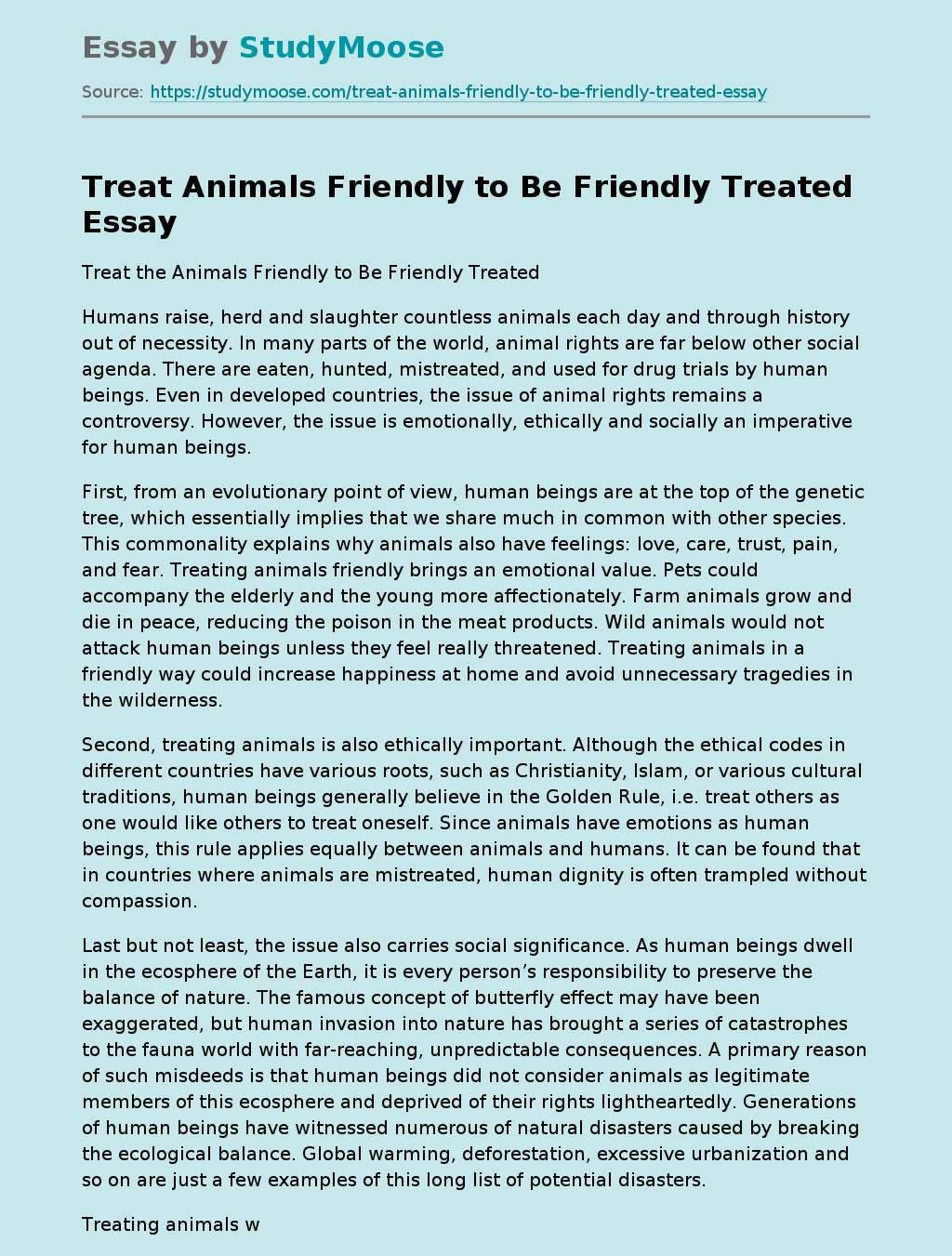