Individuals who are not classified as a part of the ingroup are stereotyped, shown prejudice, and discriminated against. All of these concepts represent acts of bias. This paper will define the concepts of stereotyping, prejudice, and discrimination. It will also address the differences between subtle and blatant bias. Last, the paper hopes to address the impact that bias has on individuals and at least two strategies that can be used to overcome bias.

Individuals who are not within the ingroup they are viewed negatively by others.

Don't use plagiarized sources.
Get Your Custom Essay on Social Biases Just from $13,9/Page

These views are considered biases. Biases can be in the form of stereotypes, prejudices, and discrimination. Stereotypes “entails applying to an individual one’s cognitive expectancies and associations about the group” (Fiske, 2010, p. 428). It is how individuals of the ingroup tend to view those that are different and not a part of the group. Individuals who are not a part of the ingroup are categorized as the outgroup.

Individuals have certain expectations and thoughts about other individuals when they perceive them to be different. Such as it is a stereotype that Black men are criminals. When in reality, not all black men are criminals and not all criminals are Black. “From a functional perspective, stereotypes justify (or rationalize) our affective and behavioral reactions to the category” (Jost & Major, 2001). Culturally, stereotypes are based on a collective consensus of the outgroup. Prejudice “entails reacting emotionally to an individual on the basis of one’s feeling about the group as a whole” (Fiske, 2010, p. 429). Prejudice is holding an individual at fault because he or she is not a part of the ingroup and are associated with the outgroup. It is not judging the individual according to his or her own faults, but because of the consensus of the group. For example, an individual is passed up for a promotion because he or she is not a part of the ingroup. Prejudice is more of a feeling or attitude against an individual. It can be positive or negative and still hold the individual receiving the feelings at a disadvantage. Discrimination “entails acting on the basis of one’s stereotypes and prejudices, denying equality of treatment that people wish to have” (Fiske, 2010, p. 429). Discrimination is an action. Individuals are discriminated against because of race, gender, and religious affiliation. An example of discrimination would be not allowing individuals of a certain race to attend a social function. Acts of discrimination can lead to violence and aggression.

Biases are formed through acts of stereotypes, prejudices, and discrimination. Any time an individual is judged based on his or her appearance and not ability, it is considered to be biased. Bias can be subtle or blatant. Subtle bias is used to enhance self because there is a misunderstanding of an individual present. This type of bias is done in a discrete manner, and the individual may not be aware of the bias. Some individuals are against interracial marriages but do not state it openly. They will vote against interracial marriages if it were presented for a vote. Another subtle bias would be voting for candidates of the same race as the individual voting. If a white person were to vote, they would more than likely vote for the white candidate over the black candidate if they are biased. Blatant bias stems from the motives of belonging and controlling. It is direct bias based on differences among groups. For example, some individuals do not like Mexicans because they feel a sense of threat from them. “Threats may be economic, political, military, or prestige-related, but the key idea is that they are, in some sense, real” (Campbell, 1965). Blatant bias can produce hostility. Anything that jeopardizes the ingroup’s identity and advantages produce a threat.

Bias can have a profound Impact on individuals. Bias can cause issues with self-esteem and stigma. Whether bias is subtle or blatant, it can cause individuals to have low self-esteem. Individuals began to feel worthless, degraded, and unaccepted. Most individuals want to be accepted by others, but when bias is present there is no acceptance due to differences. Stigma is feeling degraded or devalued because the individual is marked to be in a specific group. When this feeling is present, it is almost as if there is nothing that the individual can do or say to change other’s views about them. They are simply classified according to his or her appearance. These negative feelings and dilemmas with one’s self-identity can cause issues with one’s well-being as well. Individuals suffer from the stressors of life and the biases that continue to bring them down, until they have nothing left and their health eventually starts to fail. Not feeling as if one belongs and being controlled by others is enough to cause an individual to give up on life.

Bias is not something that will be changed overnight, but with education and acceptance of others’ differences it can be decreased. Another strategy would be ignoring ignorance. Contributing a person’s actions and negative beliefs to his or her ignorance and personal issues releases some of the stress on the individual who is receiving the bias. The individual has to realize that it is not his or her fault how he or she is viewed by others and only need to focus on being their own person and improving him or herself for his or her own benefit.

Biases come in the form of stereotypes, prejudices, and discrimination. It can be subtle or blatant. The core motives are belonging and controlling. Individuals will always have their own perception of others that are not in their group, but it is the responsibility of that individual to ignore as much as possible to avoid additional stress and possible health issues. Bias is an issue that has been around for a long time and will continue. The best strategy to alleviate it is to ignore ignorance, educate, and prove that he or she is different but worthy. 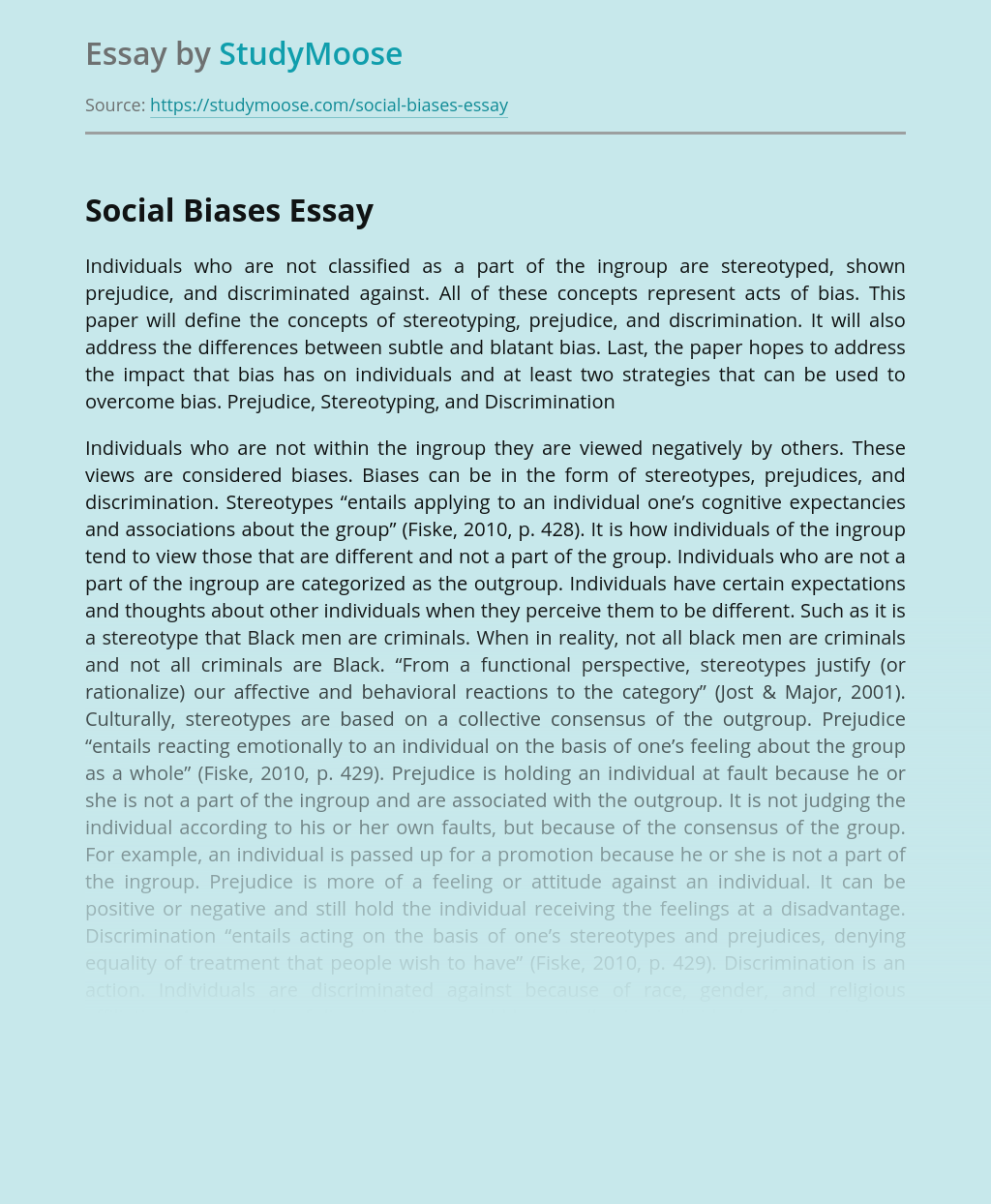