Implicit bias is defined as unconscious attitudes, stereotypes, and reactions based on how a person processes information and how that information prompts a person’s behaviors and actions. Most times the actions, behaviors, and decisions are contrary to the person’s declared beliefs (“AAFP: Implicit Bias,” 2018; see also “State of the Science: Implicit Bias Review” 2015; Yale Poorvu Center for Teaching and Learning: Awareness of Implicit Bias). Implicit bias is present in every aspect of our lives. Often times you don’t even realize you have an implicit bias towards a certain population as the definition above suggests they are unconscious.

Don't use plagiarized sources. Get your custom essay on
“ Implicit bias is defined as unconscious attitudes stereotypes ”
Get custom paper
NEW! smart matching with writer

However, implicit bias is present in the neighborhood you choose to live, in, the friendships that you hold close and even the people that you choose to date.

The following pages will address several aspects of implicit bias. It will discuss examples of the specific harm that can result from implicit bias. Different ways to measure implicit bias and the reliability and validity of the methods and tools used for the measure.

Most importantly, go in to further detail on how to effectively address implicit bias to help reverse and prevent further client harm.

Racial bias by the police is a social issue appearing to be on the rise and possibly the reason for several unavoidable police shootings. In a recent study of police body camera footage by Stanford University it was found that in general, the police were more likely to speak to black residents less professionally and in a different tone than white residents (Shashkevich, 2017).

The police were not only observed to minimize the use of language such as “sir”, “ma’am”, “please” or “thank-you” but also inappropriate actions such as speaking sharply to the residents. Although the interactions did not seem to be an undisguised manifestation of racism they compound people’s belief that racism exists between law enforcement and black people or people of color. These types of unintentional reactions can be harmful and perpetuate the belief that people of color are the target of racism by the police. Implicit bias that fuel unintentional behavior is oftentimes so subtle that a person does not realize what is happening. The subtlety of these comments, gestures, language, and treatment are confusing and leave a person wondering if the comment was intentionally biased or nothing at all. Continued negative interactions between police and people of color, fueled by implicit bias intentional or not, affects not only how the person of color may feel about the situation but also how they may respond.

A second implicit bias affecting society is gender bias. Gender bias in the workplace is causing women to suffer economic hardship with lower salaries, fewer job offers, and fewer promotions. In 2012, Yale University researchers completed a study of 127 scientist reviewing job applications of identically qualified male and female students and found that the male candidates were consistently scored higher on qualities such as competency and were more likely to hire the male candidates (Brescoll, Dovidio & Graham, 2012). Implicit bias surrounding gender has led to the belief in the workplace that men are stronger leaders, more decisive and ultimately more successful. In 2018, the Census Bureau found that full time, year-round working women earned 80% of what their male counterparts earned (Fotenot, Kollar & Semega, 2018, P60-263).

There are multiple measures of implicit bias; the most commonly used method is the Implicit Association Test or IAT. IATs’ measure the strength of associations between social groups and evaluations. They are designed to detect a person’s subconscious association between social groups and are the underlying effects of our own past experiences that indicate how we feel about something today. IAT’s also provide empirical evidence that acknowledges bias often remain below the surface but continue to affect a person’s behavior based upon the subconscious view of a certain group of individuals. A study of 150 students at California State University showed moderate validity of IAT’s and the reliability of the IAT’s improved with the familiarity of the test (Rezaei, A. 2011). With the studies, I read the question regarding the reliability and validity of the IAT’s remain consistent. It is determined in most cases that the validity and reliability are increased consistent with the number of times the individual takes the test. In my opinion, taking the test multiple times only makes a person more familiar with the process and perhaps becoming faster at responding based upon familiarity versus one’s unconscious association.

A second method that could be used to measure implicit bias as related to the topic of gender bias in the workforce, as mentioned above, would be for companies to incorporate such processes as exit interviews with questions inclusive to bias and prejudice in the workplace. Another way would be to do employee satisfaction surveys again including an aspect of potential bias as it pertains to employee satisfaction. They could even start with doing something as simple as calculating the percentage of female to male employees existent in their company per job title/function. The statistics are available to measure the implicit bias in the workforce you just have to convince those in charge of the necessity of running the data and the benefit to the company of recruiting, hiring and promoting women in the workforce at an equal rate to me.

One of the most interesting factors I learned during researching the subject of this paper was that the majority of information available regarding implicit bias continued to repeat the same message. “Implicit bias is everywhere, everyone has them and they are subconscious”. It felt as if that message alone was normalizing implicit bias and taking away the importance of how to control implicit bias so they do not affect our function and purpose in society. It seems a better explanation would be that we all have the potential for implicit bias because of our subconscious associations in our brains and if we do not know how to control the bias it could reflect as cultural stereotypes.

I agree with the studies and articles written when they say generic and general diversity training does not appear to be beneficial in reducing the effects of implicit bias. While IAT’s, surveys and statistics are good tools to bring awareness of implicit bias you are still stuck with what do we do now that we know they exist? How do we change our behaviors to prevent future harm? Education is the key to helping combat the negative effects of implicit bias. Diversion and Inclusion training specific to the target group of individuals is a way to prevent future harm regarding many different types of bias as well as many diverse groups of people. Diversity trainings targeting cognitive learning paired with awareness and behavior-based training could be effective in reversing the negative effects of implicit bias.

Education alone will not reduce the negative effects of bias. We must learn and model respect for people different than ourselves. Continue to reaffirm the value in the workforce, decision making, policy writing, friendships, relationships, politics etc. of those people different than we are. Different in race, gender, sexual identity age and many more. We must as people and social workers continue to place more value in those differences in order for those minorities to have a voice and feel heard, loved and valued. 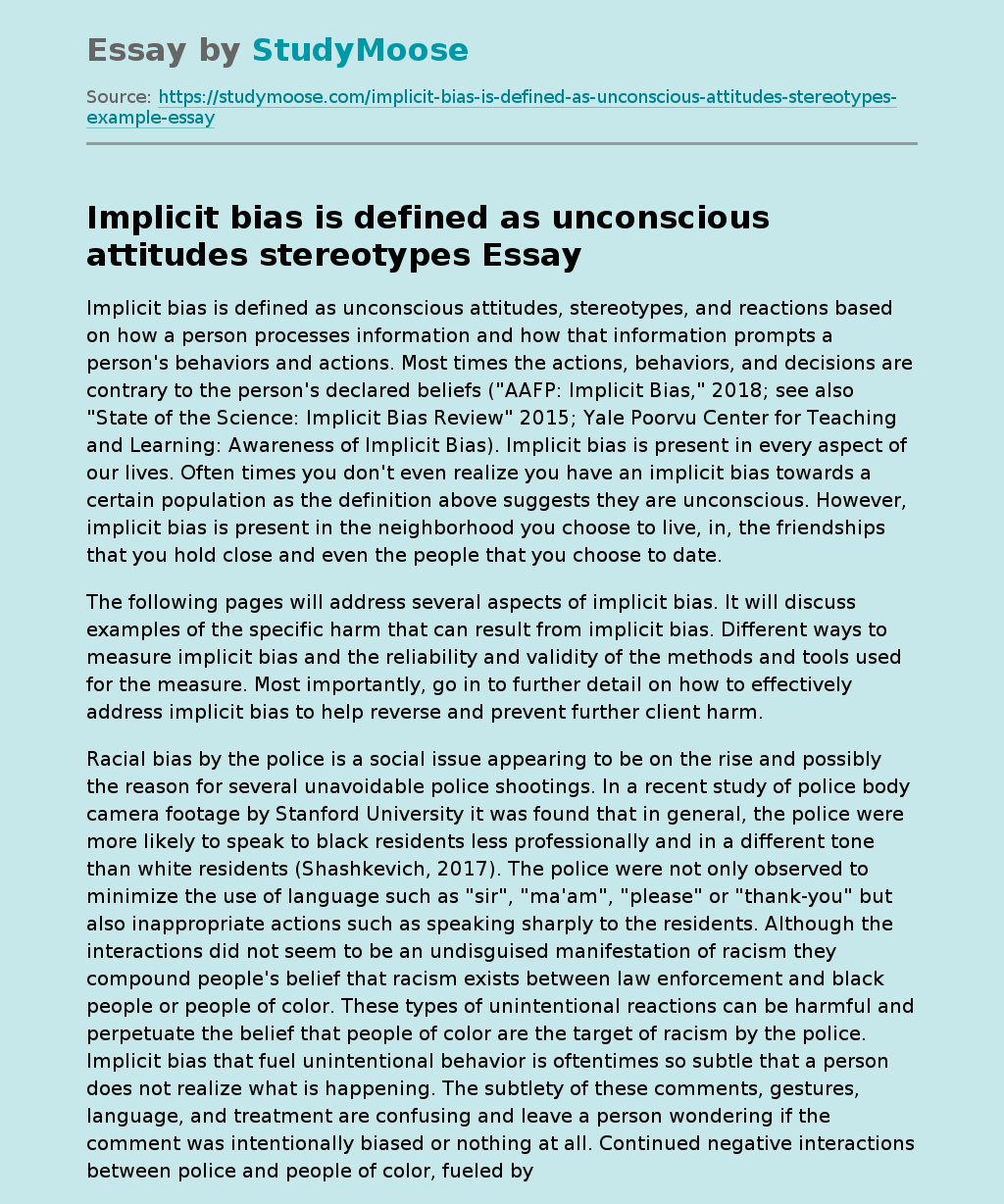