The Article on Why Good Accountants Do Bad Audits specifies the different reasons why accountants and auditors have taken part – consciously and unconsciously – in different accounting scandals. The signing of the Sarbanes – Oxley Act of 2002 wishes to achieve corporate accountability. But the signing of this act doesn’t guarantee that accountants and auditors will not feed on their unconscious self – serving bias. Unconscious bias, unlike conscious corruption, would be hard to prove to court and serve jail time.

That’s why as accountants and auditors who want to restore the confidence of the public in the accounting profession, we should go beyond the provisions of the Sarbanes – Oxley Act and apply practices that recognize the existence of bias and minimize its effects.

Don't use plagiarized sources.
Get Your Custom Essay on Why Good Accountants Do Bad Audits Article Analysis Just from $13,9/Page

There are three aspects of accounting that create opportunities for bias and influence judgment: Interpreting information in different ways (Ambiguity); Favoring clients with whom accountants built relationships (Attachment); Accountants involuntarily endorse others biased judgments to align it with their own (Approval).

Aspects of human nature can also affect how auditors form bias. Familiarity: providing better results to people you know; Discounting: auditors hesitate to issue critical reports due to possible loss of employment, damaged relationships, etc. ; Escalation: several minor indiscretions turning into bigger problems and are concealed. These facts stated, the question is what are the practical remedies to reduce, or possibly eliminate bias? The authors have several suggestions.

True auditor independence through not providing consultation and auditing services to one company at the same time may be a remedy. Also, the removal of the threat of unemployment when giving undesired results to clients and switching to different auditing firms when their contracts end are two other remedies the authors offer. Lastly, the authors suggest that auditors be given education to help them understand the unconscious errors that they make and the possible reasons that they make them.

After reading the article, I have come to share the opinion of the authors. Just as everyone thought the accounting profession is cut and dried, they couldn’t be any more wrong. I never thought before now that accountants have biased tendencies. But as I read through, I realized that we tend to be unaware that our decisions lean on one side than the other. I believe that accountants walk on a thin line and swaying to one side or the other could prove dangerous.

We might not realize it, but sometimes it is after we did something that we realize how biased and unobjective we were. Maybe that’s why a lot of accountants have been involved in various corporate scandals and fraud. Sometimes, it may be just little oversights that have come few and far between but as one looks at the larger picture, the problem has become bigger and the mistakes are too hard to repair without sacrificing one’s credibility and reliability as an accountant.

In the end, practitioners of the accounting profession whose unconscious bias have lead to deep rooted problems have consciously and intentionally resulted to fraud ,and in the end sacrificed his/her credibility and reliability as an accountant. Since bias is human nature, it would be hard to detect and convince someone that he is biased, unless he himself says so, especially unconscious bias. As mentioned in the article, we tend to please people and take care of the relationships we have come to built.

Also, more likely than not, in order to keep one’s position in the company, he/she would likely give results that please the customers, especially if one’s job depended on it. Knowing that your salary and your job is at stake whenever you audit a company and give your opinion, you would most likely tell your client the most positive things about their company even if in reality, they aren’t doing so well. It may be because though, some companies want to hear your opinion, they like you to tell them what they want to hear.

And if you don’t, they wouldn’t hire you as their auditor again. Which I think is wrong. The accounting profession exists not to tell their clients what they want to hear, but what they need to hear, whether it’s good or bad. Clients have to respect the opinions of their auditors, simply because they are there for a reason, which is to provide assurance that the financial statements of the company are fair and correct, and give an opinion on topics clients wished to consult. I have learned in class that auditors need 2 important traits: Competence and Independence.

To be both, auditors and accountants in general need to take careful steps in making their judgments and opinions and make sure that their conclusions are objective, unbiased and fair. But being both competent and independent is not easy. In the previous week, the class has presented different articles about auditing. Mostly were set in the Philippines and involved fraud. It is evident that there are some people among us who have gotten away with fraud, some of which may be auditors and accountants. And there may be such things because of the same reasons the authors of the article has mentioned.

And just as the authors have suggested, we need reforms in our country to make sure that corporate accountability is addressed and that accountants are expected of the highest degree of professional skepticism as they do their jobs. It is essential at this point that we find solutions to the problems that accountants face, now that we found one of them: bias. Hopefully, the Professional Regulations Commission and the Board of Accountancy in the Philippines in coordination with the Philippine Institute of Certified Public Accountants would find ways to resolve this problem.

Maybe one of the first things the authoritative bodies should do is to find out how biased are the accountants in the Philippines? How has biased affected the financial statements of the different entities in our country? And how do we stop bias? As a conclusion, I believe that the same problems plague accountants and auditors around the world. Many have given in to their self – serving biases, unconsciously or not. And these biased judgments have affected the world. Accountants have been known for their professionalism and their ability to stay logical and focused despite pressure.

And they have to keep their credibility as such, but bias has somehow given this profession doubts if they still are credible. Maybe not all accountants know how bias can affect their judgments, their objectivity. And bias might just be a bigger problem than we thought. That’s why bias has to be given a solution. And the government and the authoritative bodies have to look into this problem more closely and find solutions that not only will reduce bias but completely eliminate it. It may not easy, but the fate of the world’s financial statements and its fairness lies in it. 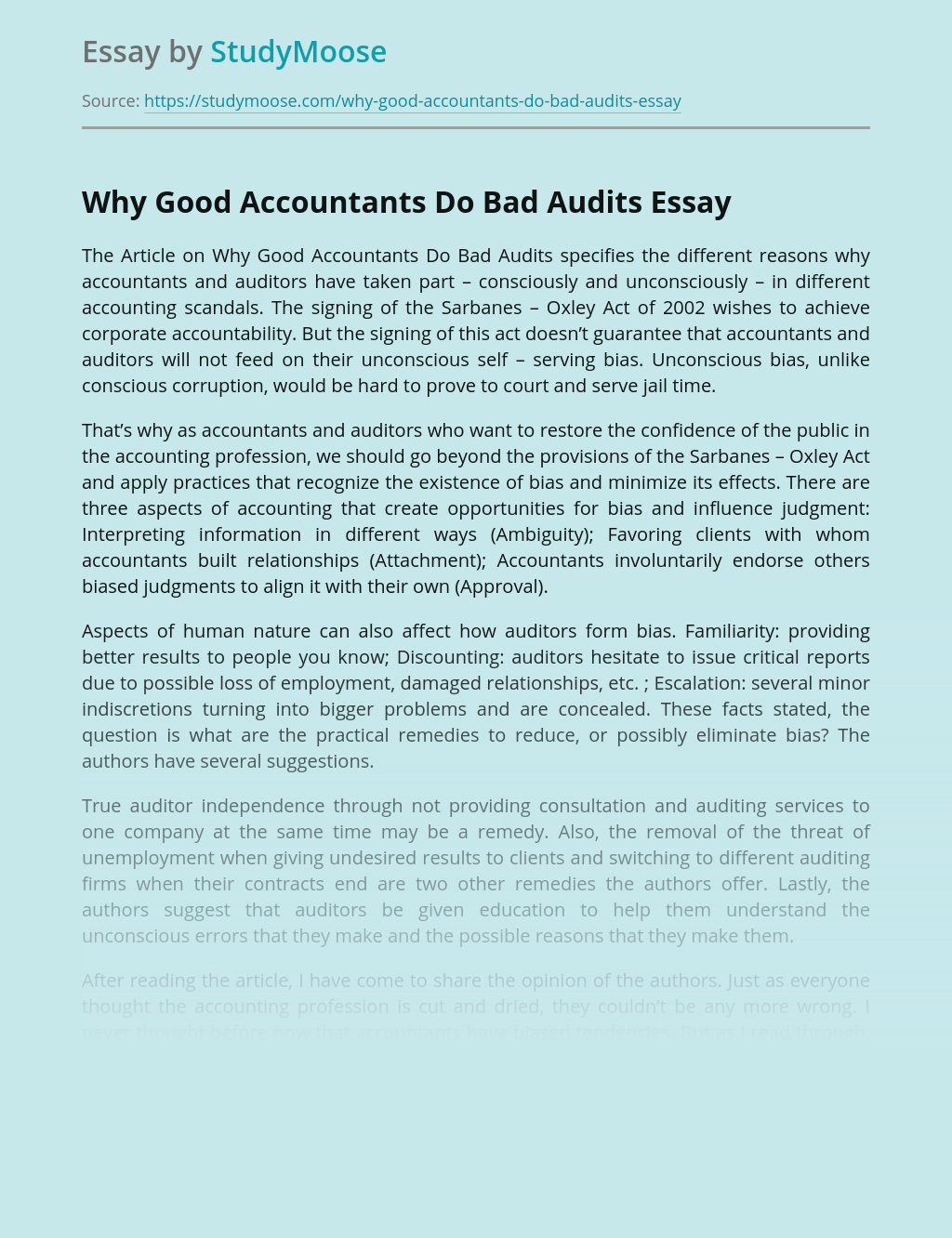 Why Do Artists Use Greco-Roman Ideals in Their Works of Art?

The term “history repeats itself” usually implys a negative connotation, but that was not the case in European art during the Italian Renaissance and the French Revolution. These were times when Italy and France were attempting to reinvent themselves after numerous centuries of stagnant oppression. During the Renaissance, Italians strived to surpass the intellect of...

Suzy started the joy of chocolate with the main goal of surviving. Her consumer goals were to create gourmet chocolates to a very high standard, attention to detail and offering a unique product is a very important to Suzy as well as specialist chocolates for customer’s requirements. Suzy worked to offer a unique product, novelty...

I am going to do a training programme for Badminton. I will do this program for 6 weeks, training 3-5 times a week. My objectives are; 1. to improve my total video game play of badminton 2. to get a high accuracy level with the component of power 3. to get a much higher endurance...

In this essay, I will describe the topic “organisation need strong culture” and the article will evaluate the understanding and meaning of culture on behalf of post-bureaucratic era. I certainly come to an agreement with the statement that for constructing a good organisation we should have very strong culture. I believe culture can make the...