The psychology of prejudice and discrimination

Cautionary notice is given to users before they read the FBI’s publication on crimes due to various reasons. As mentioned in the cautionary notice, the data that is provided on the crimes do not necessarily portray what is actually happening on the ground and in reality (Schneider, 2005). This as mentioned is attributed to various factors which influence the rates of crime in different states, counties, or regions across the United States (Macrae, 1996). The cautionary notice before be9ng directed to the FBI’s publication on crimes is of great importance to the FBI department, the government and the users in general.

Don't use plagiarized sources. Get your custom essay on
“ The psychology of prejudice and discrimination ”
Get custom paper
NEW! smart matching with writer

To the users, the cautionary notice helps in elimination of false conclusions that may be reached by users when they view the data as it has been reported in the publications (Cook, & Cusack, 2010).

The United States has been one of the greatly affected countries with racial profiling and stereotyping (Brown, 2010). The government through its various agencies such as the FBI has been trying so much to eradicate stereotyping and racial profiling in the United States, a reason that can b closely associated with the cautionary notice that is provided on the FBI website with regard to the data that is provided in the publications on crime (Schneider, 2005).

When people view data, they tend to reach conclusions and make decisions based on the data that they have been provided with. The cautionary notice provided helps in guiding the users in not reaching decisions that are not based on real facts (Macrae, 1996).

Stereotyping can be promoted if there is no such cautionary notice that warns the users on the data that is provided in the publications.

It has been observed that stereotyping results from data and information that people obtain, especially with regard to crimes. Therefore, as a way of trying to salvage the situation and help in the fight against stereotyping in the United States, the FBI department has issued the cautionary notice to avoid stereotyping (Schneider, 2005). Furthermore, the cautionary notice on the FBI website is issued to the users so as to help in avoiding prejudice of certain regions and enhancing negative views about different regions (Cook, & Cusack, 2010). The users are made to understand that whatever the data and information on crimes that has been reported in the publications may not necessarily reveal the exact details on the ground hence there is no need for conclusive decisions that may end up affecting relationships and lives of other people in the society (Macrae, C. N. (1996).

Furthermore, it is to be noted that the data and information that is published by the FBI on its website and publication is based primarily on the data that is obtained from the police and the arrests that have been made in every region (Schneider, 2005). This mean that there is a likelihood that some crimes are not reported hence the exact rate of crime and number of crimes committed in each region, state or county may not be similar to what is reported in the publication (Macrae, 1996). Therefore, the cautionary notice plays a great role in helping the users not to reach conclusions that are misleading.

The term prejudice can simply defined as the state of reaching a prejudgement or simply forming an opinion before getting the actual facts relating to an issue or a person (Macrae, 1996). It can also be defined as a state of having unfair feeling or dislike for a group of people or an individual simply because of their sex, race, and religion or even gender (Schneider, 2005). A preconceived opinion and judgement is reached before proper examination and analysis of the actual facts involved (Brown, 2010).

Stereotype simply refers to the situation whereby a belief that is unfair is held that people from a particular group or related to certain category of people are similar and share the same characteristics (Schneider, 2005). This has been frequently observed in the American society, especially in the past whereby it is believed that all blacks were criminals. Stereotype can also be based on gender, religion, and race (Macrae, 1996). The most common stereotype observed in the United States with regard to crime is that of race.

Discrimination refers to the unjust and prejudicial treatment that is given to different people or groups of people based on their gender, age, race, religion or even place of origin (Schneider, 2005). Under discrimination, there are those people that are accorded favourable treatment as compared to others under similar conditions. Individual merit is not considered under discrimination (Cook, & Cusack, 2010).

Racism involves prejudice and discrimination whereby it is directed to another person of a different race whereby one thinks their race is more superior to the other race (Macrae, 1996). This has been one of the major problems that have affected the United States whereby racism on the blacks was highly practised in the past. Sexism refers to prejudice, discrimination and stereotyping against their gender, mainly the female gender. Roles and duties are separated based on gender rather than non merits of people (Chin, 2010).

Conformity simply refers to the change in behaviour and beliefs as well as attitudes to align them with that of a given group of people that one wants to be associated with (Macrae, 1996). On the other hand, institutional supports refer to the support that is provided by the state or local government as a way of promoting a certain group of people to change their ways of life for a better society (Cook, & Cusack, 2010).

This term simply refers to the process and act of putting people in certain groups and may result in to prejudice, discrimination and stereotyping (Schneider, 2005). People that are of the similar race, social perceptions and standings as well as beliefs are classified as one group and different from another (Chin, 2010).

The difference between the two forms of prejudice is that under personal prejudice (Brown, 2010), this is directed from one person to another while institutional prejudice is from an institution in the society such as a law, education or even banking towards a group of people, or an individual based on their race, gender, or religion (Macrae, 1996).

Influencing memory for as well as perceptions of events

Common stereotypes from the guide

The principal of psychological motivations with regard to prejudice include dominance whereby people do not like to be dominated in the society and they always want to exercise authority over others (Schneider, 2005). This is based on the belief that human beings are hierarchal and therefore, prejudice is underlined with dominance in the society (Macrae, 1996). Furthermore, self-esteem can be said to be a principal psychological motivation towards prejudice whereby, those that feel threatened will result to prejudice to protect their self-esteem (Cook, & Cusack, 2010).

Based on what has been discussed above, it can be observed that there is a lot of discrimination in all aspects of life and therefore, I would say that there is some form of ethnic discrimination or racial arrests that are made by law enforcement agencies in the United States. Cultural diversity has impact on enforcement of law in that everyone in the society must be treated with equity (Schneider, 2005). The diversity in culture calls for dynamic policies and strategies of ensuring that cultural diversity is implemented in the workforce as well as with the citizens (Macrae, 1996). Cultural diversity also impacts on service delivery in law enforcement whereby law enforcers must be ready to embrace cultural diversity and therefore increased communication and improved relations in the society.

The psychology of prejudice and discrimination. (2016, Jan 11). Retrieved from https://studymoose.com/uniform-crime-report-essay 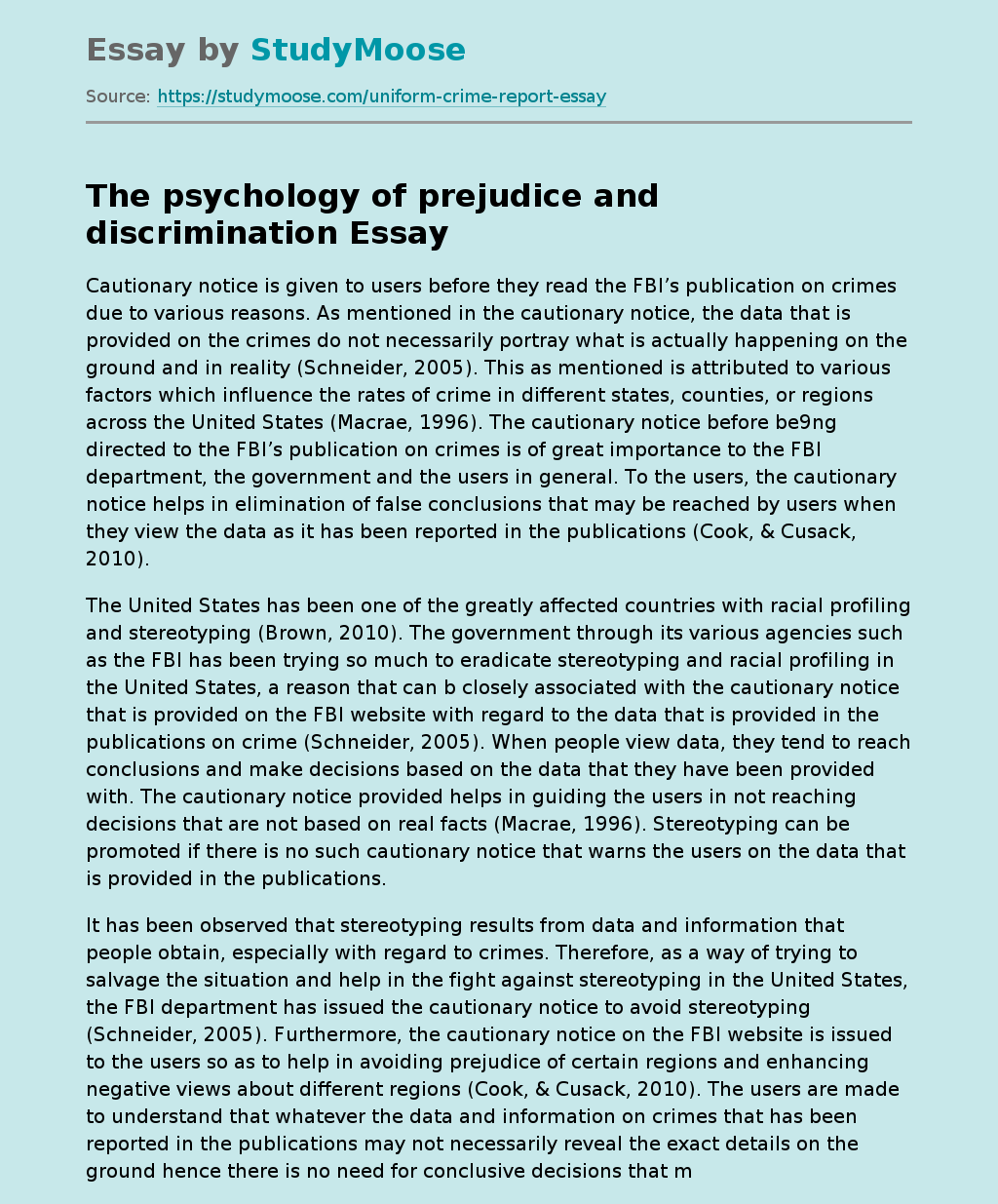