Gender within advertising relates to any visual advertisement that showcases stereotypical feminine traits and displays. Stereotypes have become used in the media to establish where one gender is positioned in relation to another. For multiple decades, the representation of females within the media has progressed into a topic of discussion. Advertisers are being accused of utilizing inappropriate and degrading stereotypes. The media is one of the strongest instruments to distribute large amounts of information. It ought to be used as a platform to impact the attitudes and culture of Australians as a push for gender equality, as opposed to reinforcing females being in a position subservient to men.

Don't use plagiarized sources. Get your custom essay on
“ Gender Stereotypes in Advertising ”
Get custom paper
NEW! smart matching with writer

Advertising portrays a society in a distorted manner, highlighting and emphasizing certain parts of our lives and hiding others. The portrayal of women reinforces their position of inequality through gender roles and body images displayed in advertising along with how advertisements have been used as gender scripts. The rules surrounding femininity have grown to be culturally transmitted more and more through standardized visual images.

‘As a result of this, femininity itself has come to be largely a matter of constructing … the appropriate surface presentation of the self … We learn the rules directly through bodily discourse: through images that tell us what clothes, body shape, facial expression, movements, and behavior are required’ (Bordo, 1997). In regard to gender roles, women have been depicted as being represented as sex objects. (Carpenter,1998) Often women that have been sexualized are seen as a decorative object, one that is desired by men.

The array of media images depicting highly sexualized females are hypothesized to maintain men’s dominance by designating women’s bodies as properties that can be evaluated, looked at, and touched at the impulse of men’s desire. Soley (1986) concluded that the usage of sexual objectification within advertisements had increased and that these became more expressive, incorporating nudity and hints of intercourse. In figure 1, the advertisement depicts four men, two of whom are topless and are standing around a woman in heels who’s wearing a revealing black bodysuit that exposes her legs. The selling point of this advertisement is their postures, the woman is lying on her back, and one of the topless men is on top of her holding her wrists down. It gives us the impression that she is being dominated and is helpless. The woman is also outnumbered by males, supporting male domination and showcasing gender-power relations. The scenery in which the photography was taken depicts an open space, large walls with clouds looming. Three out of the four males’ faces have been cropped out of the image, emphasizing the mysterious and erotic nature of the advertisement. The woman’s face and body is the focal point of the advertisement. Every model is very attractive.

The men all have defined abs and large muscles. The woman has long legs, a small waist, and a pretty face. The woman can also be depicted as being subservient to men as she is below all men, lying on her back. This type of advertisement highlights how the representation of women reinforces their position of inequality as they are seen as sexualized objects. Advertising presents women as unequal as they are being used as gender scripts. The conviction that advertisements are gender scripts is best summed up by Goodman (2002), who states: ‘Because the media are the main information source about social processes and images and self-presentation, women are likely to attend to and use media images as guides for their attitudes and behaviors’. Many commentators position advertising as a powerful socializing agent among women, and, in particular, young women (Furnham, 1997). Thus, in respect of how advertising might be seen to operate as a gender script, it would be fruitful to begin by tracing the representation of femininity in advertisements directed at young women and girls. Advertising impacts females early in their lives, as young girls tend to be subordinate to men, and in teaching them to be ‘feminine’ (Duke, 2002). In effect, these advertisements are considered to function as a ‘vocabulary of interaction’, thus reproducing male dominance (Tuchman, 1997).

The image that the media portray of beauty is more tyrannical than ever. Young children are consistently being sexualized within the advertising and throughout popular culture. Girls get the message at a very young age that they must be intelligent in addition to being beautiful and thin. This demonstrates how gender scripts have impacted the mindset of young women. As advertisers look for new ways to get our attention, they also use ever more graphic depictions of violence and sex. Advertisers use sex as a tool to promote their product as ‘sex sells’. Figure 2 depicts an advertisement for a ‘Tommy Hilfiger’ perfume. The woman is thin, has lush hair, and is attractive; she encapsulates what young females strive to look like. The focal point of the image is the female figure, rather than the product, this demonstrates how this advertisement acts as a gender script as it guides females’ attitudes, behaviors, and general outlook on the media. The woman is also lying on a bed with no clothes on, this highlights the sexualization of females along with exuding feminine characteristics. Her hair and makeup look perfect, which encapsulates how women have been manipulated to follow these gender scripts. The name of the perfume is Dreaming, which aims to blur the line between real life and dreams, dreaming has connotations to an ideal life of pure bliss; the way females’ lives are painted to be. The tag line, ‘the new fragrance for women’, highlights again how this advertisement is targeting women and how women should follow gender scripts. The typeface used in the advertisement is also very feminine as it is elegant and stylized, with high contrast between line weight and having serifs. The typeface promotes the sexualization of women. The color red used on the typeface and on the perfume bottle has direct connotations to being passionate, love, and desire. Use of red as a strategic move to reinforce women’s position of inequality as they continue to follow gender scripts. This perfume advertisement reinforces their position of inequality as women have become victims of gender scripts.

The media has also long made particular use of the figurative properties of female bodies in captivating its audiences to consume. In this way, advertisers have represented women to be unequal due to fetishizing the female body. Advertising has been noted to be central in the constitution of human norms (Thompson and Hirschman, 1995), promoting visuals of the body as being beautiful, instructing individuals who will consume in the creation of image and self-representation (Finkelstein, 1997), and supporting them to be liable for the way they look (Featherstone, 1991). In the last half-century, advertising has constantly battered the public with images of ideal bodies against which they often tend to compare themselves. It has been noted that advertising tends to encroach upon the space built by pregnancy, where once women could relax from the demands of the idealized body. Not having to work towards acting and looking the way advertising portrays women. Pregnant women don’t have to succumb to gender scripts as their body changes shape and undergoes pregnancy (O’Malley, 2006; Patterson and O’Malley, 2006). Women have been constantly considered to be an accessory to the male gender. In 1978 Hustler Magazine, (figure 3) Larry Flynt has a quote on the cover that reads, “We will no longer hang women up like pieces of meat”. He is aware of the constant admiration of the female body by the mass media and uses it as a catchphrase in order to catch the attention of his audience. He clearly states that he is aware that women are repeatedly referred to as pieces of meat and uses it to emphasize how advertising will continue to portray women. The advertisement depicts a pair of female legs being processed through a meat tenderizer.

The advertisement also has a stamp of approval which is very degrading, strengthening their position of inequality. The females are placed in an elegant pose, with the toes pointed. This also supports the idea that they are admired, and their bodies have become an object to view. The legs are hairless and shiny, alluding to the fact that the female legs are sexualized and admired. The history of looking at the human body as an object gives people permission to continue to look at women. There is a large assumption that it is mainly men who have objectified women and female bodies. The female body has become idealized and consumed by the media (Kyra Lanis and Katherine Covell,1995). Constant stereotyping and the misrepresentation of women within advertising are conditioning people on how to treat and value women.

These attitudes of the media shape the behavior of the public and prevent progressive movement towards gender equality. Males have been depicted in advertising as having dominant traits while having connotations of aggression, which do not encourage and support the portrayal of females. Females are continued to be represented as inequal and being the subservient gender. The current misrepresentations and degradation of females depicted within the advertising is not reflective of the times. The media place-specific subliminal gender roles onto women which portray them as being unequal to men. The female body has evolved into an object of admiration, being consumed and sexualized by the media. Women are confronted with gender scripts which are seen in advertising, these gender scripts also reinforce their position of inequal 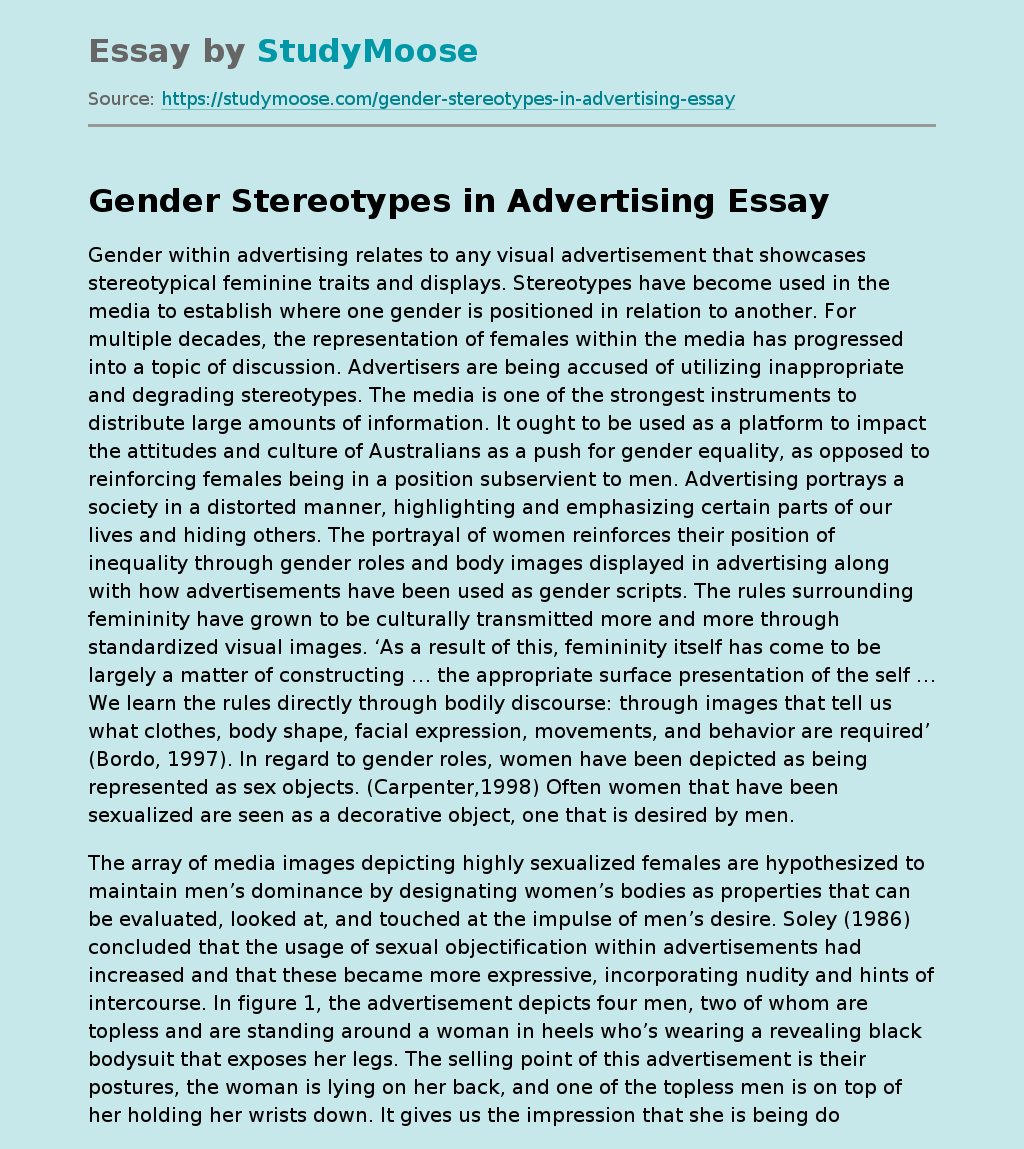