To Kill a Mockingbird – Critical Response

Categories: To Kill A Mockingbird
Download paper
Download
Essay, Pages 4 (942 words)
Views
330
‘To Kill a Mockingbird’ is a novel cleverly written by Harper Lee to depict the prejudicial, discriminative and racist attitudes of white society in Maycomb, Alabama in the 1930’s. Maycomb at first glance seems to be a warm and gentle place. However, as the novel progresses, the backdrop of slavery, racism and poverty as a result of the Great Depression becomes prevalent. Lee explores various themes such as the symbol of the mocking bird as a metaphor for innocence , social justice issues such as racism and prejudice and the everyday attitudes of people living in small Deep South towns such as Maycomb.
Don’t waste time
Get a verified writer to help you with To Kill a Mockingbird – Critical Response
Hire verified writer
$35.80 for a 2-page paper

She successfully uses a variety of language techniques including irony, satire, humour and the use of metaphors and colloquial language to develop characters and convey these themes in a way that is interesting engaging and thought provoking. The story is told through the perspective of Scout, the daughter of Atticus, a prominent, widowed lawyer. Harper Lee’s skill in creating vivid imagery and a detailed description of the town is made possible as Scout recounts the story as an adult.

The story is divided in two parts.

The first deals with Jem (Scouts older brother) and Scout’s obsession with a mysterious man named Arthur “Boo” Radley, who shares the “spooky” Radley House with his father Mr. Nathan Radley. When Scout and Jem befriend a boy called Dill, their obsession his heightened and they play games depicting the life of Boo the way they perceive it. The second Part of the Novel deals with Tom Robinson, a black man who is charged with raping Mayella Ewell, a white woman.

Tom is defended by Atticus and it is here that the prejudices of white society become prevalent and confronting.

Harper Lee successfully uses irony l as Jem and Scout try to make sense of a society that strives to be moral and decent, yet embraces mindless prejudices and racism. This use of irony and satire coupled with the innocence of the children creates humour (for example, when Scout decides to beat Dill up so that he would marry her) in the novel in captivating way. Colloquial language typical of the environment in which this novel is set is used constantly and appropriately. However, differences even in colloquial language can be noted between white and black society.

Calpurnia, a black housemaid looking after Scout and Jem, shows this very clearly, using ‘White man’s language’ when in their company and changing to ‘black man’s jargon’ when in the company of backs. This divide in language is used to emphasise the divide in society between the two cultures. Language is successfully used in the novel to develop personas and characterization. An example of this is the way that the Ewell’s use of foul language as they address others, showing their poor education and social standing.

Again, irony is created here when Bob Ewell asserts himself better than a black man yet Tom Robinson speaks far more politely and without foul language. Mayella shows an extreme lack of education in her speech as she struggles to find the right words to express herself clearly. Atticus, on the other hand, uses formal language of a high standard and incorporates metaphors, irony and humour in a way that is impressive and often subtle. This is used to develop his persona as a highly respectful, open- minded, moral man.

Various themes such as discrimination, prejudice, and social justice are incorporated into this novel. The racist and often illogical prejudices of white society against black society ties into the theme of social justice, a prime example being the outcome of Tom’s case showing how the world we live in may not always be just and how justice depends on the attitudes of individuals. However, perhaps the most central theme is the importance of the title “To kill a mockingbird”. This concept, the senseless persecution of an innocent individual, is used to describe Tom Robinson’s court case.

Mocking birds sing for people’s enjoyment, do no harm to the community and are a symbol of purity and innocence. Tom Robinson is perceived as a mockingbird when he is wrongly convicted over the rape of Mayella Ewell because of the prejudices of white society. Lee uses the repetition of the words “guilty… guilty…. guilty” to emphasise the condemnation of an innocent man, or in a metaphorical sense, the killing of a mocking bird. Boo Radley may also be seen as a mocking bird.

In the beginning of the novel, he is perceived as a dangerous, manic individual by the townsfolk only because of his mysterious persona (Boo rarely ventures out of the Radley House), though he had committed no crime. However, after Boo leaves gifts in a hole in a tree, puts a blanket over scout when she is standing in the cold and ultimately, saves Scouts life when Bob Ewell tries to kill her to seek revenge for the demoralisation of his family, during the court case, Jem and Scout realise that he is actually a harmless, kind, individual.

Again, we see how an innocent man can be discriminated against by prejudice borne from ignorance. In conclusion, Harper Lee has achieved her purpose in making us think about the way we treat others and the effects that our own prejudices may have on their lives. She has achieved this by successfully conveying the common attitudes of white society in Deep South towns in the 1930’s (especially towards African Americans), and developing themes and characters through her use of language devices such as colloquial language, satire and irony in a way that is effective and engaging.

To Kill a Mockingbird – Critical Response. (2017, Mar 04). Retrieved from http://studymoose.com/to-kill-a-mockingbird-critical-response-essay 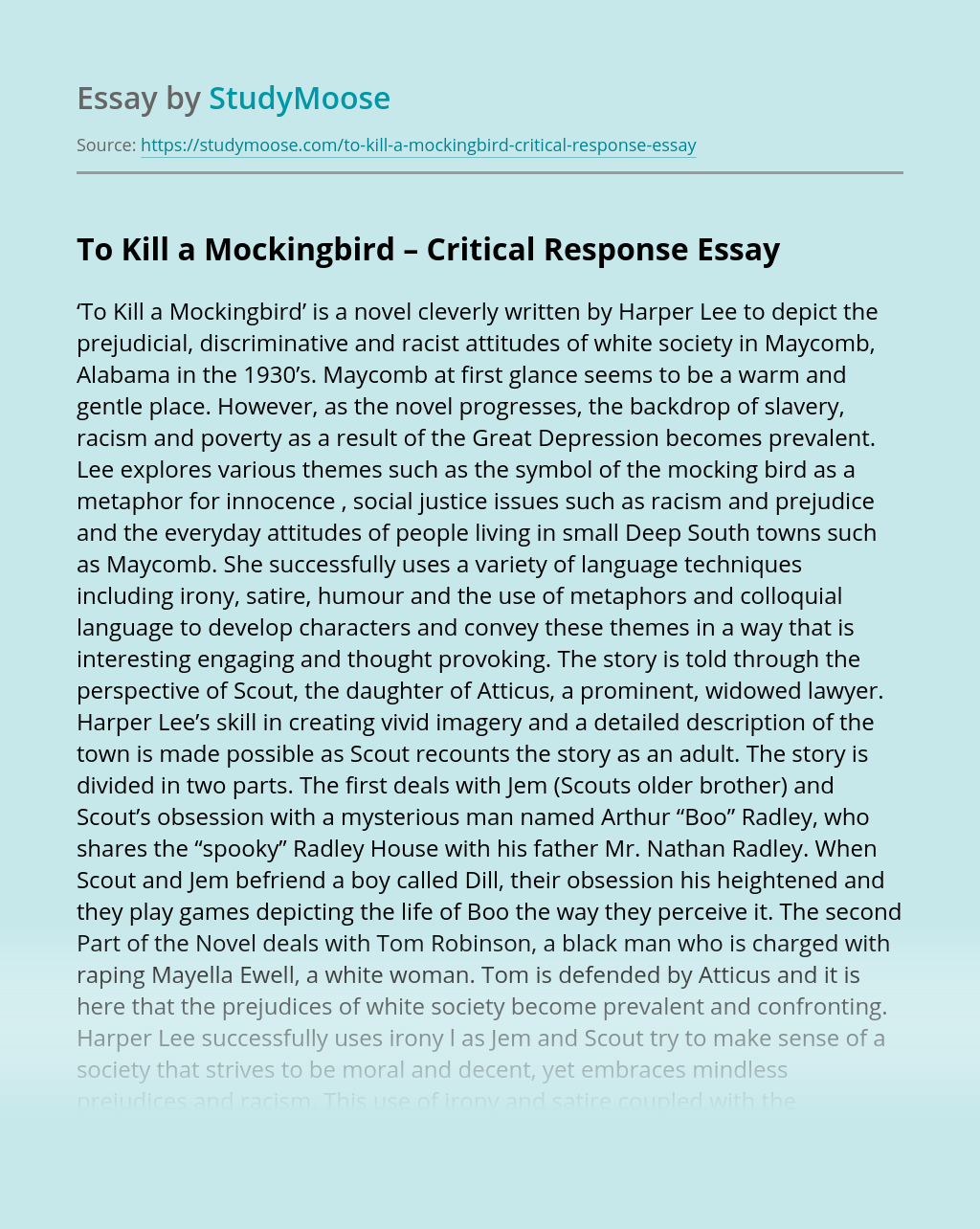 Don’t waste time
Get a verified writer to help you with To Kill a Mockingbird – Critical Response
Hire verified writer
$35.80 for a 2-page paper
Stay Safe, Stay Original