To Kill a Mockingbird, a Classic Novel

“To Kill a Mockingbird” is an important classic novel to read in school and should be included in lessons. Although “To Kill a Mockingbird” has been commonly regarded as a ‘banned book’ for explicit language and racism it is very informative and a noteworthy example of coming of age, and the wrongness of racism and stereotypes. For example Atticus, a character in To Kill a Mockingbird, who was a very respectable man in his community, represents a black man in court during a very racist era, doing all that he could to prove he was innocent despite the color of his skin; this shows that not all of the topics regarding racism in the novel are negative.

Don't use plagiarized sources. Get your custom essay on
“ To Kill a Mockingbird, a Classic Novel ”
Get custom paper
NEW! smart matching with writer

The poor language is also something that unfortunately children are already exposed to in everyday life. I feel that as long as they understand the wrongness of this language and do not continue to repeat it then it shouldn’t be of much concern.

This langue it is important for children to be exposed to, to fully understand what life was like in the 1930’s.

This novel was set in a very important time in American history and exposes old practices that young students may not be familiar with in a more enjoyable and memorable fashion; through the narrations of the character Scout. This may help the children learn more willingly and enjoyably rather than learning from a text book that does not give them as great of an idea of what it might be like for someone to live during that time period.

Teachers are also able to teach students about dialect, figures of speech, allusions and other literary devices using this novel. The characters in it are very colorful and developed well as well making a lot of material for discussions about characters.

To Kill a Mocking Bird has been ranked by British librarians even before the Bible as a book that every adult must read before dying. The adaptation of the book was also made into an Oscar-winning film which was released in 1962. The novel has became popular with time and the style of writing, the plot and characterization places it in the top 10 books that everyone should read, therefore as students are maturing I believe that they should read “To Kill a Mockingbird” and be able to analyze and dig deeper into the book with the guidance of teachers and peers during school.

In conclusion I believe that “To Kill a Mockingbird” should be included in school curriculum because it shows that racism and stereo types are unjust and not always true, exposes children to important times in history and is a great example of literary devices and character development.

To Kill a Mockingbird, a Classic Novel. (2016, May 07). Retrieved from https://studymoose.com/to-kill-a-mockingbird-a-classic-novel-essay 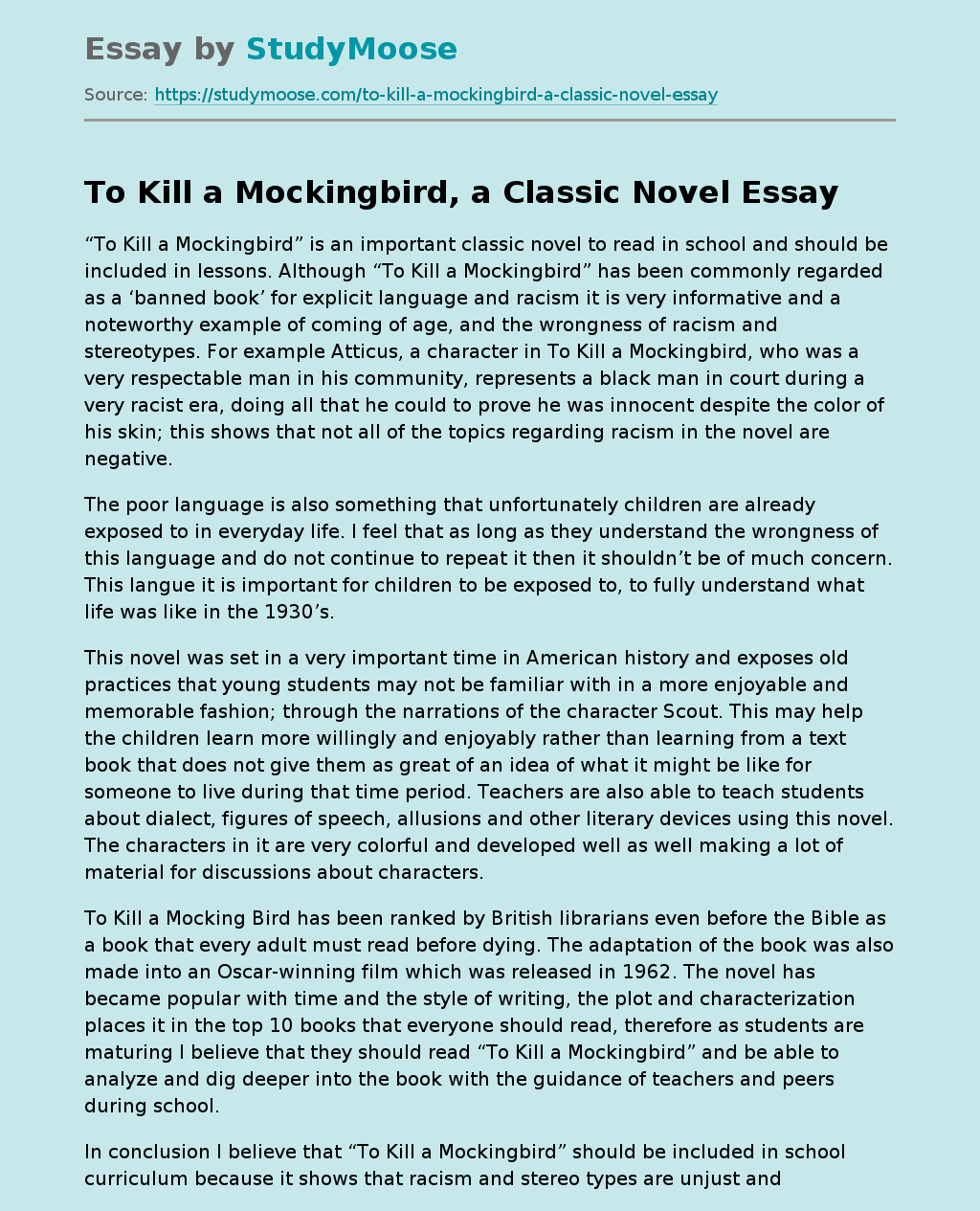