To Kill a Mocking Bird: Appearence vs Reality

Did you ever think you knew something about a person only to find that you could not be more wrong? Making unverified assumptions like this is part of human nature for everyone. Some people do not want to reveal their true selves to others and prefer to remain unknown. Other people do not want to learn the truth and prefer to believe what they think is right evidence not with standing. The people of Maycomb County are no different than people in the larger world.

Don't use plagiarized sources. Get your custom essay on
“ To Kill a Mocking Bird: Appearence vs Reality ”
Get custom paper
NEW! smart matching with writer

The characters in To Kill A Mockingbird work hard to maintain appearances that differ from reality.

Several characters in the novel work hard to display an appearance that differs from their internal self because they feel alienated from others and uncomfortable with revealing their true selves to people. Dolphous Raymond appears to be a drinker; all he really has in his sack is Coca – Cola. “Scout, it’s noting but Coca – Cola” (Lee: 200). “You little folks won’t tell on me now, will you? It’d ruin my reputation if you did” (200).

Dolphous Raymond likes to give people a reason for why he lives with black people. The town does not look down on him, the town actually feels sorry for him because they do not know the real story; they base their feelings on Raymond’s supposed alcohol addiction. He is thought to be a town drunk, looked badly upon for being a white man that married a black woman. As it turns out, he is not drunk after all.

He merely uses it as a cover-up, so that he does not have to answer questions about his life.

Dill claims he can smell when someone will die. In reality he has a perfectly normal nose. “No, I mean I can smell somebody an’ tell if they’re gonna die, an old lady taught me how. Dill leaned over and sniffed me” (36). Dill cannot smell when someone is going to die, he only says that in order to impress Jem and Scout. He feels that he has to seem cool, so he often tells tall tales.

Atticus’s appearance is that of having no talents appealing to the school kids, but in reality he is a very good shot with a gun. “Forgot to tell you the other day that besides playing the Jew’s Harp, Atticus Finch was the deadest shot in Maycomb County in his time” (98). Atticus had a talent, which is proven that, Atticus could hit 14 doves out of 15 doves, and still be upset with the miss shot. Atticus would call the miss shot a waste of ammunition.Scout and Jem realize that Atticus is relatively old and does not do all the things Scout’s schoolmate’s fathers do. But after witnessing their father shoot and kill old Tim Johnson who had gone mad, Atticus is a hero to them and they are no longer embarrassed because of his age.

Calpurnia pretends to the black community that she does not know how to speak any better then they do, when in reality she can not only speak correctly but she can also read:

That Calpurnia led a modest double life never dawned on me. The idea that she had a separate existence outside our household was a novel one, to say nothing of her having command of two languages (125).

Calpurnia is living two lives, because, in the Finch’s family she is the black maid that keeps the house in order. Calpurnia who experiences better conditions and responsibilities than other African Americans of her time, due to Atticus’ beliefs. So, in the Finch household Calpurina is treated equally, and is not judge by the color of her skin. In the black community Calpurnia is the ordinary black person who takes orders from a white family, and puts up a front on how she cannot read and speaks slang like the rest of the black community.

Yet another reason why characters form the book posse’s appearances that are in contrast to their actual selves is because others want to perpetuate pre-conceived illusions. People appear different but really they are the same type. He thinks it’s how soon families learned to write and read, but Scout says that Walter, whose father is illiterate, is bright and is only held back to help his family. Jem said the sooner families are writing the finer they are, but Scout said she thinks that there is no difference between people:

Well Jem, I don’t know – Atticus told me one time that most of this old family stuff’s foolishness because everybody’s family’s just as old as everybody else’s. I said did that include colored folks and Englishmen and he said yes (226).

Atticus believes that the notion of fine families is silly. Jem is looking for what makes people different. Jem believes that there must be different kinds of people of everybody would get along. Miss Stephanie Crawford believes that dogs can’t be rabid in February and that fleas were making Tim Johnson act dangerous:

Jem sat in numb confusion, and Miss Stephanie said. “Uh, uh, uh, wh’da thought of a mad dog in February? Maybe he wasn’t mad maybe he was just crazy. I’d hate to see Harry Johnson’s face when he gets in from the Mobile run and finds Atticus Finch’s shot his dog. But he was just full of fleas from somewhere (97).

Miss Crawford is trusting known fact over hard evidence about Tim Johnson’s condition. The fact is that Tim is dangerous. Miss Stephanie believes that Tim was flea – bitten. However, she was in her house like everybody else when Tim is walking up the streets, so Miss Stephanie is lying to herself to explain away Tim Johnson’s seemingly impossible behavior. Denial is Miss Stephanie’s way of responding to change.

It’s an illusion to foot – washing Baptists that Miss Maudie and her flowers are doomed to hell. “Yes ma’am. They’d burn right with me. They thought I spent too much time in God’s outdoors and not enough time inside the house reading the Bible” (44). Miss Maudie describes Mr. Radley, Boo’s father, as a “foot-washing” Baptist who believed that pleasure was sin. Foot-washers, according to Maudie, believe that flowers and women are also sins by definition. Scout wonders if this is the reason why they locked Boo in the house, to keep him away from women and flowers.

The characters in To Kill A Mockingbird work hard to maintain appearances that differ from reality. Many times in life, people, incidents, or events appear one way to us, when in reality, beneath the surface they really are or mean something else. Many times we interpret someone’s actions in a different way than they intended. A simple example of this is when a teacher gives a test and tells students to remain silent and keep their eyes on their own paper. When one student leans over and asks another student what time it is, the teacher comes by and rips up that student’s paper for cheating. To the teacher it appears that the student is cheating, but in reality the student is only checking how much time he has left on the test. We should never assume things are true without really finding out for sure because it is our assumptive qualities that block understanding.

To Kill a Mocking Bird: Appearence vs Reality. (2016, Jun 28). Retrieved from https://studymoose.com/to-kill-a-mocking-bird-appearence-vs-reality-essay 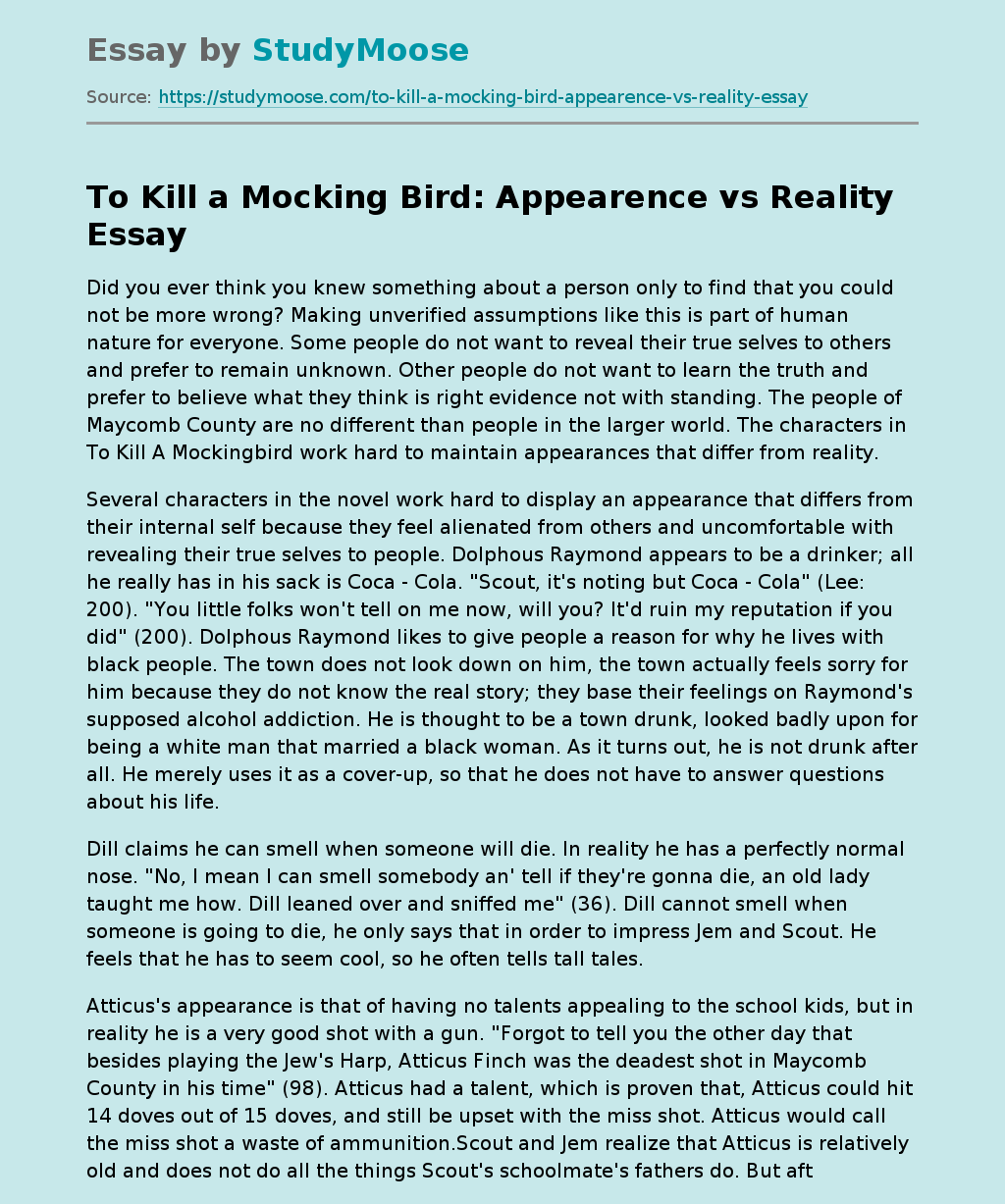