Memory loss has always been regarded as one of the many symptoms that go along with old age, and as such, is considered to be a near-inevitable human condition. Media and its varied forms have naturally tackled this condition and the concepts surrounding them, and this treatment spans genres. For this paper, an analysis of three genres that explore forgetfulness shall be taken up: the poem “Forgetfulness” by Billy Collins, a cartoon on senility by Carroll Zahn, and Ken Flieger’s magazine article for the FDA Consumer “Memories are Made of This.

Don't use plagiarized sources. Get your custom essay on
“ Three Genres on Forgetfulness ”
Get custom paper
NEW! smart matching with writer

Although it is not precisely a medical article, “Memories are Made of This” is geared towards informing its readers regarding the intricacies of memory and forgetfulness. Flieger addresses the seriousness of the condition by offering a more informative delivery with a technical slant, using familiarized medical jargon to support his statements, although the tone of the article is generally more casual. The article explains how science and research have been trying to unlock the mystery of precisely how our memory works, why we remember some things, and forget others, and if memory and its loss can be adequately defined (14).

Memory loss could be your run-of-the-mill forgetfulness or absentmindedness (like forgetting one’s keys), regarded as a normal tendency of the brain to “misplace” short-term memory. But then graver symptoms vary, from “repeatedly asking the same questions; having difficulty finding words; using inappropriate words; or being unable to complete familiar tasks” (“Determining When the Time is Right,” 10), all of which could point to serious conditions such as Alzheimer’s disease or dementia.

On the other hand, cartoonist Carroll Zahn views these tricks of memory with humor. In her cartoon, “A Little Forgetfulness” (see Appendix A) two men are sitting in a park bench. One of the men has turned to his companion to say, “Oh, getting old isn’t so bad, except maybe for a little forgetfulness. ” However, the illustration shows that the speaker is completely naked, and thus the cartoon pokes fun not only at the condition of memory loss, but also the nonchalance with which it is treated.

The cartoon is geared toward more open-minded senior citizens, those who do not mind viewing their conditions with humor. Its audience may also include people who have had interactions with senior citizens who tend to be forgetful, and may even be well on their way to being senile. The humor employed here, however, does not seek to offend, or indicate that old, forgetful people are to be treated less of the person than they are. Humor takes on various form as well, as in the case of the poem “Forgetfulness” (see Appendix B), written by Billy Collins.

The poem’s tone is conversational, and full of imagery that is accessible to even a layman. The persona enumerates how he tends to forget things, citing that he has “kissed the name of the nine Muses” (line 8), and “watched the quadratic equation pack its bag” (line 9). The poet’s humor, however, does not directly poke fun at the condition, and instead the humor is present in his tone, offering a more nostalgic and poignant view of how one’s memory is built up, and how a person subsequently loses it.

The humor makes the sentiment more personal by using a gentle self-deprecation, with a lyrical and imagistic voice. The images, too, remain simple, using familiar things and events that could happen to any reader. Although there are instances in the poem in which he uses classical mythology as an image, the poet easily integrates it into the conversational and humorous of the tone of the poem by saying, “It has floated away down a dark mythological river / whose name begins with an L as far as you can recall” (lines 16-17).

The poem discusses how memory becomes much more than a mental capacity – memory is an integral part of a human being, and its loss, however gradual, poignantly affects man. All three genres have taken a generally casual tone, regarding a condition that may or may not be an indication of a more serious disease. Flieger’s article discusses forgetfulness in terms of neuroscience, and yet the language is still conversational, easy enough to comprehend for the general audience.

Zahn’s cartoon creates a humorous situation within forgetfulness, using exaggeration (or, more tragically comic in some cases, accuracy. ) Lastly, Collins uses the poetic form to transcend both the medical and comic aspects of forgetfulness, by delving deeper into the human psyche, and discussing how significant memory is to the human soul. Although these three different genres – journalism, cartoon illustrations, poetry – talk about one thing, forgetfulness, the way they discuss the subject is distinct, in that their discussion stays true to the form demanded of their genres. 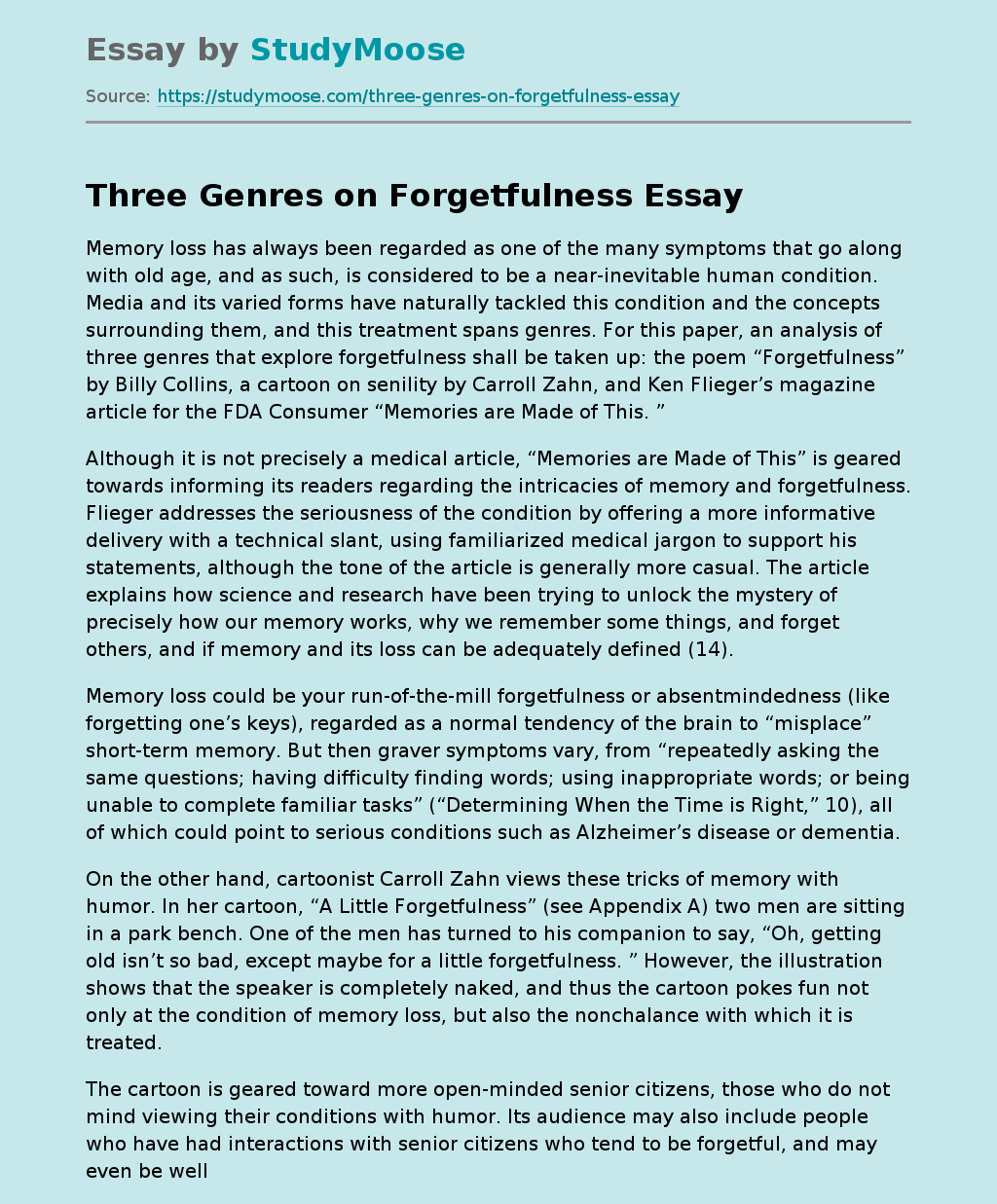