The Importance Of The Three Strikes Law Criminology

The three strikes law is a strict mandatory life sentence without parole on offenders convicted of felony crimes. These crimes include murder, robbery in which a deadly weapon was used, rape, or burglary. Differing opinions suggest that three strikes law is unfair and unjust because the law excessively affects African American and Latino men who have a higher representation throughout the criminal justice system. Others suggest that the three strikes law violates the Eighth Amendment of the Bill of Rights; because the law is unjust when convicted of a minor offense still count as a strike.

Don't use plagiarized sources. Get your custom essay on
“ The Importance Of The Three Strikes Law Criminology ”
Get custom paper
NEW! smart matching with writer

I believe the three strikes law deters crime and future criminal behavior because it assembles the thought of facing tough consequences.

The neoclassical theoretical framework can be coupled with the specific and general deterrence theory. The specific deterrence theory emphasizes a point on the individual itself. The theory explains the discouragement of criminal behavior from future criminal acts by understanding the consequences. General deterrence theory concentrates on the prevention of crime by forging examples of distinguish criminal behavior. It exercises the public view to deter other individuals from committing the same crime. The experience is use to restrain others from perpetrating the same criminal acts.

Schafer argues that three strikes law is an effective crime control policy that deters youthful offenders from becoming repeat offenders. In California, statistical evidence is provided by how “crime has dropped 26.0 percent since 1994.” (p 312) He then proceeds to contend on how juvenile offenders are more likely to be violent throughout their generation. The data he claims “suggest that a small number of young offenders commit numerous unpunished crimes because the courts, especially the juvenile justice system, provide the offenders with countless second chances. The three strikes law would reinforce the motivation to change their criminal behavior because the juvenile justice systems “do little to rehabilitate or deter young offenders from crime.” (p 313) Schafer reinforces his argument by conducting a survey to measures the offender’s experiences with the consequences of their crimes. The result of the survey concluded that, “61 percent of the offenders said they would not or probably would not commit a serious or violent crime if they knew their prison sentence would be doubled” and “70 percent said that would not or probably would not commit the crime if they knew they would receive life in prison.” (p 314) His survey demonstrated a deterrent effect from the root of the source. To conclude Schafer’s argument, he proved that offenders, who have repeated experiences with the criminal justice system, have learned through their consequences, and the rewards of the criminal act do not outweigh the consequences.

Vitiello’s Argument: 3 Strikes is not a Deterrent to Violent Crime

Schafer’s position on the three strikes law deters repeat offenders. Based on his studies, the evidence he provides concludes a convincing argument. Schafer explains how the concept of deterrence reflects on offenders and repeat offenders. Following by his survey, the results created a solid foundation for his argument. The whole idea of general deterrence is very effective. People are likely to commit a crime when the opportunity arises. If the consequence is “tough” they will be afraid to commit the crime. The creation of three strikes law is to put the fear in people’s mind to make them think twice about violating the law. All it takes a single thought about “if it’s worth it or not.” I see the specific deterrence theory as a way to deter repeat offenders. The three strikes helps fix the criminal justice system by putting those who choose to become repeat offenders to stay in jail. Most crimes today are from repeat offenders. From the Bureau of Justice Statistic Special Report, “A 2002 study survey showed that among nearly 275,000 prisoners released in 1994, 67.5% were rearrested within 3 years, and 51.8% were back in prison.” Explaining how more of our prisoners that get convicted are more likely to go back in prison. This is where the three strikes law takes place. We created a barrier for those offenders to think about what they are doing. We make them think about if it’s worth twenty five years to life.

Another effective reason why three strikes is effective is because it targets repeat offenders who fail to change their criminal behavior after the second time. The mandatory twenty five years to life for third time offenders will put them away for a long time and it also keep them off the streets. This type of “get tough” law has done its part on reducing the crime rate throughout the nation. It serves as a deterrent and it’s the best weapon we got against repeat offenders. From Analysis of the California Attorney General’s Report, “the drop in the crime rate that California has experiences since 1993 is drastically different from the first four year of 1990-1993 where the overall crime rate dropped only 2.4% and the violent crime rate increased 7.3%.” When the three strikes law took effect, the crime rate dropped drastically to about 5 %. Some may argue that crime was reducing before the three strikes law. Data shows that crime was dropping before the law was passing, but when the law did pass, it drastically declined boosting the drop further.

Moreover, crime can be seen as a rational choice theory. The theory proposes that offenders measure the “opportunities, cost, and benefits of particular crimes.” (Hagan.2010. p 101) Hagan referenced Cornish and Clarke’s (1986) rational choice theory by explaining how crime is a matter of “situational choice” and we need to increase the certainty and the severity of the punishment to exclude the temptation and the choice of criminal activity. Therefore, the three strikes law plays that role of decreasing the situational choice, so that crime cannot happen. The cost and benefit of the crime does not equal the punishment. In results, offenders are more likely to disregard criminal behavior because the three strikes law decreases the motivation to commit a crime.

The three strikes law is used as deterrence. Many argue that it’s a waste of government’s money. Some argue that it’s the best tool we got against repeat offenders. I personally feel that it’s the only defense we got against repeat offenders. The theory behind the law supports why the law would work. This law is based on human behavior. The human behavior based on learning from experience and making sure that experience was enough to deter the offender from committing the same act. The three strikes law revolves around the Neoclassical Theory and it deters repeat offenders.

The Importance Of The Three Strikes Law Criminology. (2019, Aug 19). Retrieved from http://studymoose.com/the-importance-of-the-three-strikes-law-criminology-essay 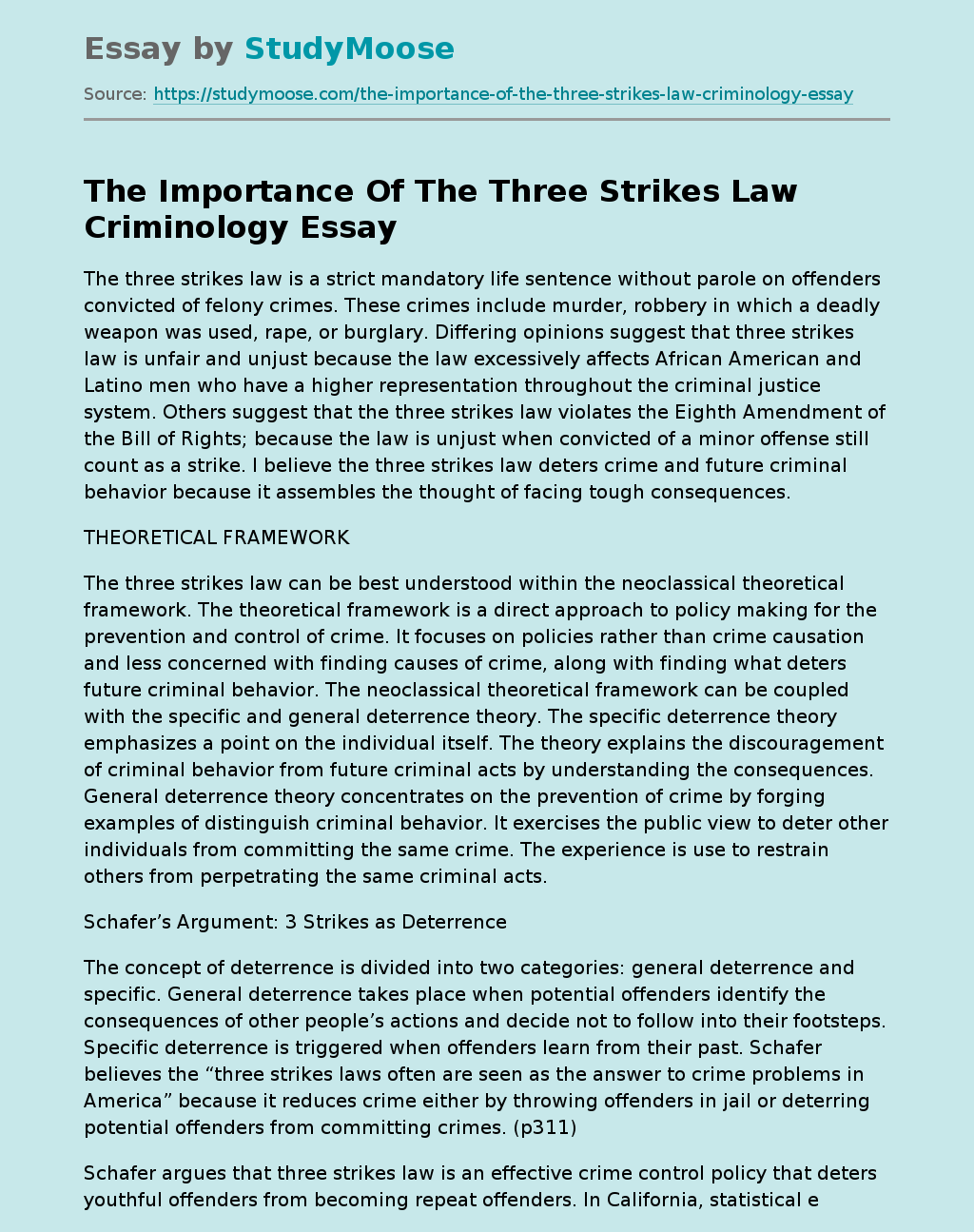