This can be seen in the aspect of education, political issues, standard of living, their value of money, and also gender roles, etc. Below, I will highlight some of the greater changes affecting their lifestyle. In the next chapter, there will be a theoretical analysis of this change, whether it is a necessary and progressive stage from hunter-gather to modernization or that the Dobe were simply better off as they were before…

In Chapter 12, the book depicts how the people of Dobe Ju/’hoansi have changed today as compared to a few decades ago.

Don't use plagiarized sources. Get your custom essay on
“ This can be seen in the aspect of education political issues standard ”
Get custom paper
NEW! smart matching with writer

The influence of colonialism has resulted in a huge shift in their lifestyle; from the simple and carefree foraging lifestyles in the early 1960s to what has become a life within a poverty, disease-stricken area of a 3rd World nation today.

The introduction of various outside forces have caused many problems in the area, where problems like alcoholism and violence become more prevalent, and poverty is on the rise even with more cash circulating in the area.

Despite having more schools, the level of truancy remains high and even problems of HIV/AIDS have become increasingly a bigger issue in the area. All these are inevitable as parts of the modern world system is being incorporated in and introduced to this region.

One significant change is the introduction of governmental institutions into the Dobe. In 1963, there was virtually hardly any state institutions nor commercial activities. Goods were traded and exchanged based on their relationships and kinship system.

It was only until 1990s that some social and state institutions such as schools, clinics were in place, and hence drastically transformed the way of living for many in the Dobe region. The intervention of the state has thus led to the improvement of various infrastructure, facilities and amenities. As a result, there has also been a shift in the reliance of nature to governmental facilities. From having a strong kinship system of inter-reliance, they have been influenced by the outside value system to rely on one’s property and money instead. The Ju/’hoansi tribe has been transformed from a society of foragers to a society of small-holders who eked out a living by herding, farming and craft production, along with some hunting and gathering.

In the political area, the Ju/’hoansi were given more opportunities to participate in local affairs, yet often having their opinions disregarded by the local Herero elites. Along with this changes and education, there were also changes in their mindsets. In the 1980s, The Department of Nature Conservation was pushing forward for the Nyae Nyae area to remain undeveloped, in order to earn tourist revenue by making the place a “natural traditional area” and forcibly preventing development there. At that time, an improvement in education and income has resulted in some changing mindsets and the Ju/’hoansi were strongly opposed to the idea of a “Plastic Stone Age”, as John Marshall labelled. As quoted from a local Ju/’hoansi: “Is it right that we shoud still be wearing loincloths? [Eating well] is a good thing but it doesnt mean our women should have to expose their stomachs and buttocks again by wearing skin clothing…” The Ju/’hoansi thus demanded for clear rights through years of protests and opposition, and finally, with support from the international mdeia, the South African scheme was dropped.

Social changes have inevitably affected many aspects of Ju/’hoansi life. Up to the innate ways of acting gender and sexuality has been altered from education and Western influence. Looking at Chapter 6 (Marriage and Sexuality), the Ju/’hoansi had a carefree and uninhibited view of sex, where they experimented with different partners since a young age, and women had no qualms about having multiple partners. All these were not viewed as socially immoral, but natural in their culture at that time. However, with more education, ideas of morality and sexual behaviour is taught to be more discreet and restraint. With the rapid rise of AIDS especially in that area, this has resulted in more campaigns and promotion of the government for safe sex and ideas of the “right and safe” sexual behaviours are proliferated. As such, this has an effect on the way the people interact.

In retrospect, progress is hard to define merely by an improvement in standard of living. With the quick pace of change, there are bound to be social consequences and people left behind by these processes. Is progress then better for the Ju/’hoansi, or were their old carefree lifestyle a better alternative? There has been many differing views on this issue and this debate can be found more in the next chapter, of the 2 main schools of thought.

This can be seen in the aspect of education political issues standard. (2019, Dec 04). Retrieved from http://studymoose.com/this-can-be-seen-in-the-aspect-of-education-political-issues-standard-example-essay 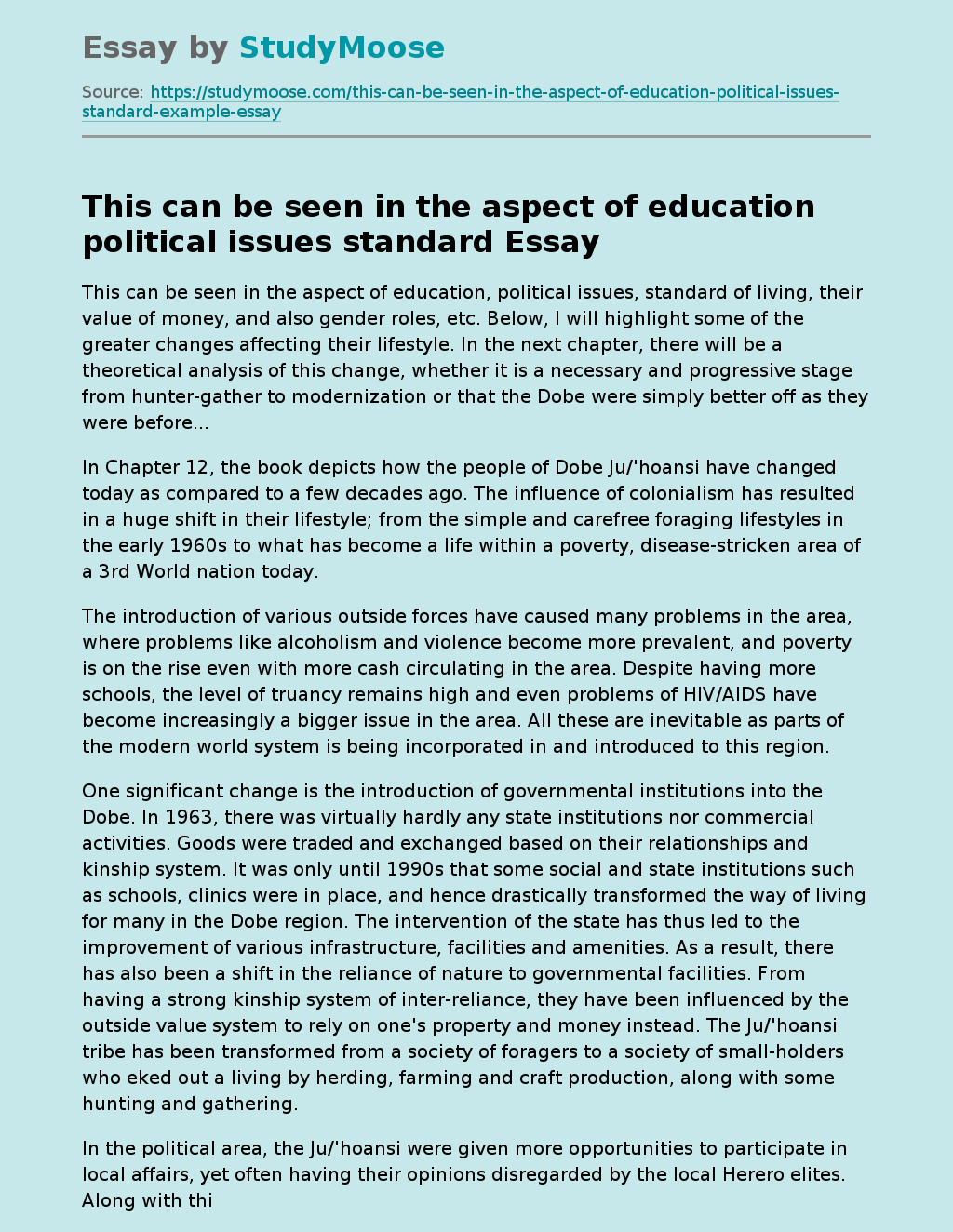