Text language has evolved rapidly over recent years . Over 200 million texts are sent every day in the UK, that’s over 3,000 texts a second. However, there is still a ongoing debate about whether texting is actually creative or not. I would define creativity as, being characterized by originality of thought, and as having or showing imagination. I think that texting could be seen as creative as it has created a whole new ‘language’.

An example of this language is shown in data sample A , ‘ dunno .

Don't use plagiarized sources. Get your custom essay on
“ Texting could be seen as creative as it has created a whole new ‘language’ ”
Get custom paper
NEW! smart matching with writer

ite just have an early 1. work again tomoz :( x ‘. Multi-modality, clipping, non-standard grammar and number homophones are used here but the main one , which creates a new language , is the textism used. The word ‘tomoz ‘ is the textism, a word which is particular to texts. I think that this word, which is a clipping is creative. This is because if you sent it to anyone they would instantly recognise it in the context of the text and it is just much more concise and time-efficient, therefore creative.

More innovative textisms are used in data sample D, which are also innovative as they are much more concise, than normal words. Another thing which texting has created are emoticons. You use punctuation to express your emotions in a shorter form. I think that they are very inventive because they are understood worldwide, as people have come to know what they mean and they are much quicker and easier to send. The quote in the previous paragraph shows that it can be creative as, if he/she replied ‘I found that very sad’, it could almost be seen as sarcastic.

However if he/she replied with the :( face then it would be much more quicker, and it would feel almost as though you are ’emotionally connected’. It is now seen as an acceptable way to reply and end texts, and has subtly created a new way of communicating, which I think is very creative. I think that people could say that these words are just a mutilation of standard English, but I believe that it is not. I believe that they are contractions and not mutilations. This is because text language is very multi-modal and that makes it very unique, and therefore creative.

An example is the word ‘hey’ which is heavily used in texts. This takes advantage of both spoken and written English, and because of that fact I think contractions are creative. Calling this uncreative as a mutilation is unfair, as I think it is very multi-modal and that is a good thing. Another reason which makes texting very creative is the fact that it has created new, faster and easier ways of giving information. An example of this is ,’ 02: Your bill’s 31. 39 GBP this month’. This text on the whole is pretty formal.

Texting could also be used for adversing : ‘ Text DRIVE to 20215 and we”l send you an offer on driving lessons’. Again, this text is very formal. I think that these are very creative interactions, as ten years ago we would never have had this, so I think that the fact that we can do this now, as texting has evolved, is really creative and amazing. Texting has also allowed different people to express themselves differently, which I think is creative. Because of texting, I think that messages vary depending on the purpose of the message and the relationship between sender and recipient.

I think that most boys text messages are relatively straight forward as shown in data sample C : ‘ Is the maths for 2day. ‘ This shows a bit of slang, as a number homophone is used, but is mostly formal. This also shows a shared pragmatic understanding, which I think makes this text very creative, and easier to understand. However, with girls texts are much more abbreviated and more slang is used : ‘ Hi honey. Pls cn u send me that pic again? Lost it. TOOO CUUUTE!!! Xxxxx’. In this text vowel emission and hyperbolic use of language is used.

Girl messages compared to boys are much more ‘ over the top’, and that creates different styles of talking which makes texting creatively diverse. As well as that texting has created a much broader culture, which I find creative. An example of this is the text poetry competitions. It has created a new genre of poetry and I find that very innovative. However, I do not think that some of these poems are deserving of the amount of money they won. An example is Josephine Dimbleby’s poem. I do not find that creative in the slightest, but I do not think that that is representative of texts.

However, quite a lot of them are open to your own interpretation, and I think that is clever on the poets behalf, which makes the text poem creative. An example of this is : ‘ fldrz cant jst sm 2 stkit , evrytme the bggrz snkit’. I find this poem creative as you can understand the poem in the context of it all, and the fact that it is open to interpretation. An example of this is where it says ‘bggrz’, you could think it says buggers or beggars – it is up to you. I find that very creative, but I do think that there is a fine line between creative and uncreative, and some of the poems in the competition cross that line.

Many people , like scientists in the Rob Waugh article, say that heavy texters ‘could be less able and willing to learn new words’, but I disagree with this heavily. They say that it can ‘dent your reading abilities’, but I think texting actually benefits from reading. I think only a few text abbreviations like ‘lol’ and ‘cba’ have made it into verbal communication, most of the brevity techniques used in texts only apply in these forms of communication and have little direct impact on the way we speak.

If anything, they are much more informed by how we speak and write, which again shows the creativity and multi modality of texting. Text messages are often an attempt to capture in writing the patterns of speech. That is what David Crystal believes, as to clip a word you need to be able to spell it. I agree with this and the Canadian researchers in the Keven Drews article as I think that ‘there is a lot of misconceptions about the way people use language when they text’.

This is innovative because I think texting has created a new language which actually helps our English, and we wouldn’t have had that help ten years ago. In conclusion, texting should be seen as a new and exciting form of speech. To criticise text language for making us bad spellers or as ruining the language is to misunderstand it completely. I think texting should be seen as very creative as it has opened a variety of different things to all of us. I think that texting will continue to grow and become more and more innovative and creative as it evolves in the near future.

Texting could be seen as creative as it has created a whole new 'language'. (2020, Jun 02). Retrieved from https://studymoose.com/texting-seen-creative-created-whole-new-language-new-essay 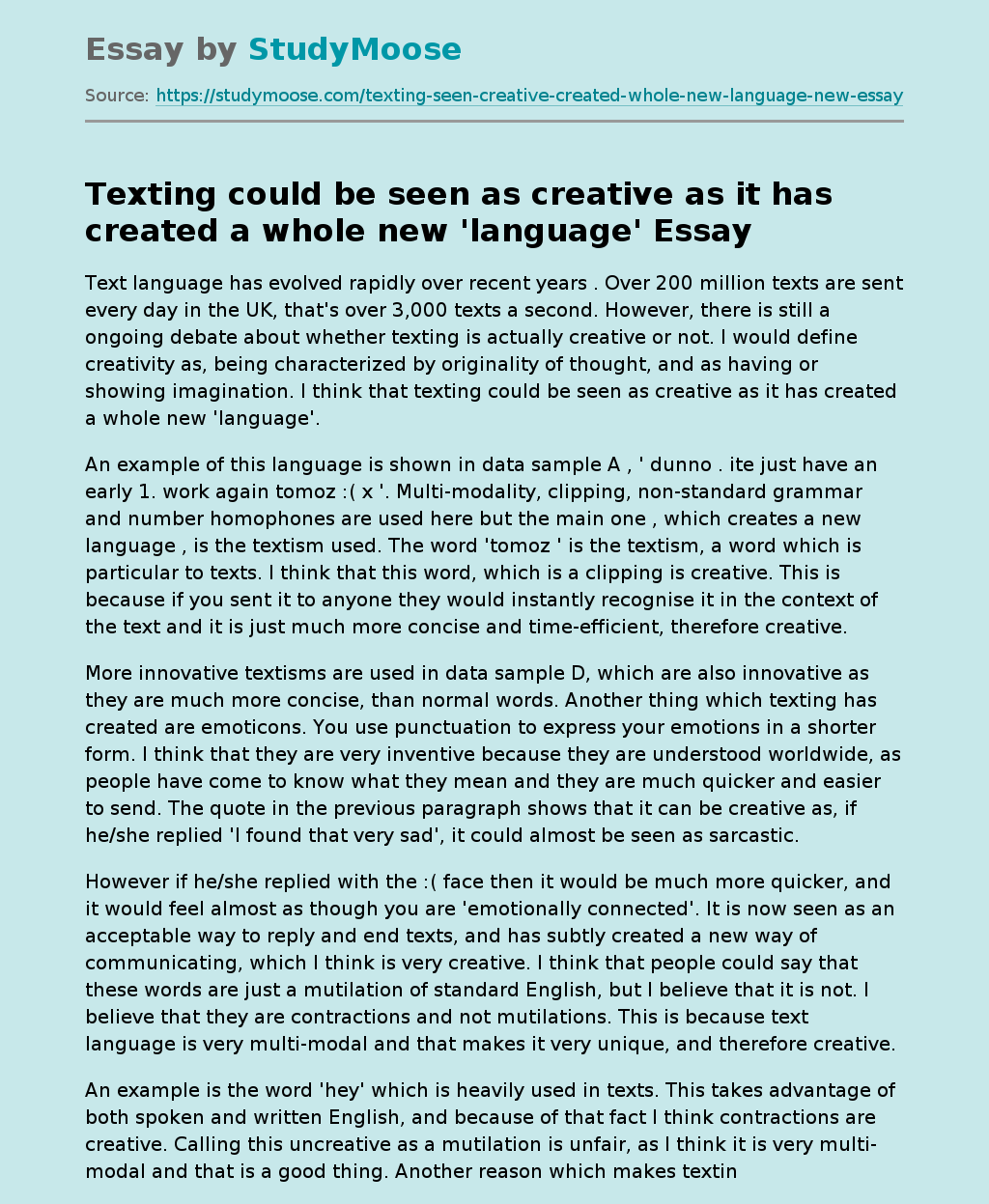