There have been plethora of research papers that have been written in the past on the relevance of marketing in the political arena. Some researchers have even gone ahead and made the analogy between political candidates in the electoral setting to the goods in the commodities market. It is more inclined towards the communication aspect of the message that political candidate wants to convey to the voters. Various models of Political marketing have also been suggested. Zavattaro (2010) has mentioned that marketing in the political arena has shifted from being centred around the platform to be centred around the candidate.

Don't use plagiarized sources. Get your custom essay on
“ There have been plethora of research papers that have been written in ”
Get custom paper
NEW! smart matching with writer

All the strategies that are created to shape a political campaign are well thought after. Depending on the surveys held and the responses collected from the public, the communication strategy is set. Various models of political marketing have been formulated in the last 25 years. Each of them vary from each other in different aspects.

Butler and Collins (1994) proposed a model that included the structural and process characteristics of political marketing.

The candidate and the ideology come under the structural characteristics. The process characteristics include the advertising and communication strategy of the party, ways of reaching out the masses etc.

Wring (1997) in his model has used the analogy of buyer and seller with the candidate and the voter. This has been done based on the 4 Ps of marketing. The environment i.e. the market consists of the loyal supporters, floating voters and the opponents.

Baines et al. (2002) created a model that is related to the coordination of local campaigning activity by the national party.

Political campaign managers carry out research in various voting districts, collect census data and also conduct market research to gain insights about the attitude of the voters, their opinions, and also determine which fraction of the people are likely to change their preference from one party to another and what are the reasons for such a shift.

Many research papers have also talked about the political segmentation of the electoral voters. Some also talk about the effect that social media is having on the viewpoints of the voters. Jackson (2004) gave his view by quoting that those candidates who use social media to reach out to voters of a particular area and talk about a particular problem, are the most effective.

There have been plethora of research papers that have been written in. (2019, Nov 15). Retrieved from https://studymoose.com/there-have-been-plethora-of-research-papers-that-have-been-written-in-example-essay 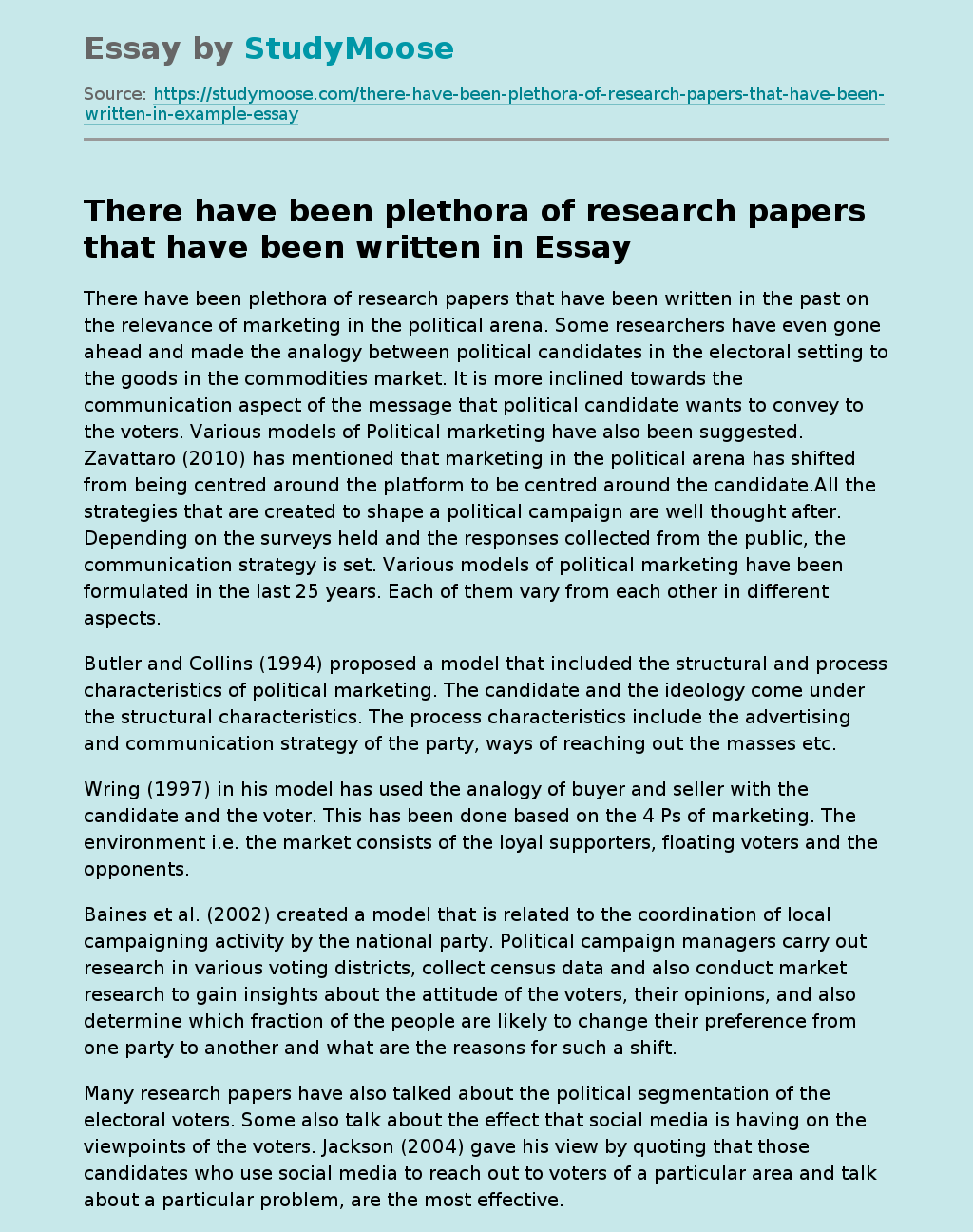