Theoretical Perspectives of Race and Ethnicity

The three sociological theoretical perspectives of race and ethnicity are the functionalist, conflict, and labeling perspectives. The functionalist perspective is the perspective that shows how parts of society work in a structured manner to keep the survival of a society. The belief is that if a certain part does not contribute to society’s survival in an effective manner that it will not move form one generation to the next. (Schaefer, 2006).

The conflict perspective is the perspective that society thrives on the conflict and struggles between social groups that compete against one another.

Turn in your highest-quality paper
Get a qualified writer to help you with
“ Theoretical Perspectives of Race and Ethnicity ”
Get high-quality paper
NEW! AI matching with writer

The labeling perspective stereotypes a group by gender, religion, race, or ethnic group instead of the actual behavior that takes place.

For instance two people commit the same crime but one is wealthy and white and the other is poor and African American. The wealthy white person is to be given another chance based on their status and the dominant group that they belong to. The African American should be punished based on their status and the subordinate group they belong to. The conflict perspective is way more extreme than the functionalist and labeling perspectives.

In the conflict perspective the dominant and subordinate groups are in a constant battle for power.

The dominant group ignores and exploits the minority groups and continually will be able to get away with doing so because of the status of the dominant group versus the status of the minority group. The functionalist perspective is not as extreme as the conflict perspective and wants to understand why certain functions and systems continue in spite of opposition.

The functionalist perspectives seem to have the theory that if one group does not contribute to society’s survival that they will not proceed to carry on to the next generation. Functionalists do believe that some negative can be positive such as discrimination between races and ethnic groups. However these dysfunctions can cause conflict and instability in a set society. (Schaefer, 2006). The minorities in the labeling perspective seem to be stereotyped and discriminated against. The dominant group has the upper hand and will persevere when conflict arises because of their social status, racial and ethnic group.

These certain groups that are being discriminated against may lose out on participating in certain events, activities, or jobs. These negative stereotypes can eventually lead to the social norm and can have a negative effect on society as a whole. The dominant group establishes too much power and that their stereotyping in correct and valid so they will proceed to do it. (Schaefer, 2006). The minorities in the conflict perspective become ignored and exploited by the dominant group.

They are left fighting for certain social, political, and economical powers that they do not have but the dominant group has control of. The dominant group has power and control over certain political, economical, and social aspects and of more importance than the minority group and their subordiation is ignored by society. (Schaefer, 2006). The minorities in the functionalist perspective will not continue into the next generations if they can not contribute to society’s survival in an effective manner.

According to this perspective that is how it should operate however there are still plenty of minorities and racial discrimination that still occurs. The dominant group can survive even though there is still discrimination even if it is negative because the belief is that the negative and can be a positive for both the minority and the dominant groups. The dominant groups believe they are not responsible for problems faced by the minorities and they also will not allow minorities to question their own status because that would be questioning society itself.

However these dysfunctions can cause strife between classes and minorities as well as tension, disputes and disrupts the peace of society. In theory all of these perspectives can keep the minorities from achieving possibly high status, jobs, or respect because they have been considered inferior for so long. (Schaefer, 2006). References Schaefer, R. T. (2006). Racial and Ethnic Groups: Understanding Race and Ethnicity. Prentice-Hall: Pearson Education Inc.

Theoretical Perspectives of Race and Ethnicity. (2016, Dec 14). Retrieved from https://studymoose.com/theoretical-perspectives-of-race-and-ethnicity-essay 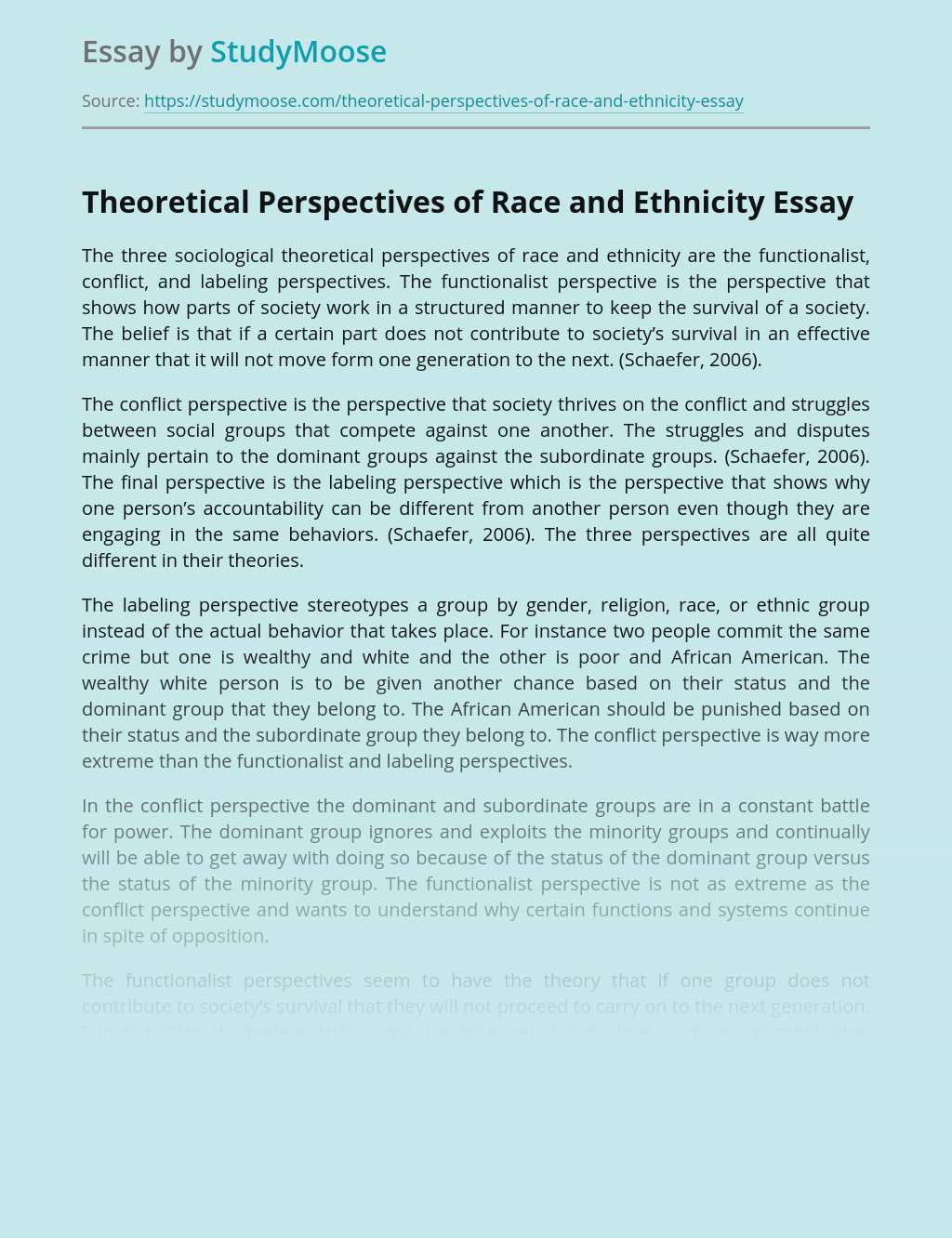 Turn in your highest-quality paper
Get a qualified writer to help you with
“ Theoretical Perspectives of Race and Ethnicity ”
Get high-quality paper
Helping students since 2015
Stay Safe, Stay Original