Theoretical paradigms allow sociologists to analyze effectively virtually any dimension of society.  It is a set of fundamental assumptions that guides thinking and research.  Two among the three paradigms in sociology that I want to compare and contrast in terms of their strengths and weaknesses of their explanatory value for social inequalities are the Conflict Approach and Functionalism Approach.

The Conflict Approach is a theoretical framework based on the assumption that society is a complex system characterized by inequality and conflict that generate social change.

Don't use plagiarized sources. Get your custom essay on
“ Theoretical Paradigms ”
Get custom paper
NEW! smart matching with writer

This approach complements the functional approach by highlighting not integration but social division.  This approach strength is that it guides sociologists to investigate how factors such as social class, race, ethnicity, sex, and age are linked to unequal distribution of money, power, education, and social prestige.   Therefore, rather than identifying how social structure promotes the operation of society as a whole, this approach focuses on how these patterns benefit some people while being harmful to others.

On the other hand, the functionalism Approach is a framework for building theory based on the assumption that society is a complex system whose parts work together to promote stability. The functional approach strength is that, it makes two assertions.  The first holds that society is composed of social structures, meaning relatively stable patterns of social behavior.  Social structures range from broad patterns, including the family and religious systems, to face-to-face behavior like waving hello.  The second is that each social structure has a social function, or consequences for the operation of society as a whole (Marx, 1984).

Moreover, the functionalism approach has long been influential in sociology.  The positivist root in this approach is the tendency to see the social world as stable and orderly.  The job of sociologists, from this point of view, is to employ scientific research to learn how society works.

Despite its strong influence on the discipline of sociology, however, recent decades have revealed the weaknesses of this approach.  By assuming that society operates more or less “naturally,” critics point out, the functionalism approach tends to overlook how social patterns vary form place to place and change over time.  Thus, the notion that any particular arrangement is natural seems hazardous at best.  By focusing attention on societal unity, critics point out, functionalism tends to overlook divisions based on social class, race, ethnicity, and gender, and to downplay how such division can generate tension and conflict.

In addition to its weaknesses, functionalism emphasis on stability and tends to minimize important processes of social change.  Further, by emphasizing social integration, the functionalism approach tends to pay less attention to divisions based on social class, race, ethnicity, and gender and to downplay how such divisions often generate tension and conflict.  Overall, then, this approach takes a conservative stance toward society.

The conflict approach, on the other hand, has developed rapidly in recent decades.  Yet, like functionalism, it has a number of weaknesses.  One, this approach highlights power struggles, it gives little attention to social unity based on functional interdependence and shared values.  Another, the conflict approach advocates explicitly political goals in its drive for a more egalitarian society, thereby giving up claim to scientific objectivity.  Supporters of this approach counter that all social approaches have political consequences, albeit different ones.

An additional weakness, which applies equally to both the functionalism and conflict approach, is that they paint society with broad strokes, describing our lives as a composite of “family,” “social class,” “gender,” “ethnic group,” “race,” and so on. Hence, both functionalism and conflict approach share a macro-level orientation, meaning a concern with large-scale patterns that characterize society as a whole.  They take in the big picture, as one might investigate a city from the vantage point of a helicopter high above the ground, noting how highways facilitate traffic flow from one place to another or the striking contrasts between rich and poor neighborhoods.

These approaches limit their attention to large-scale structures and processes while overlooking the details of everyday life (such as the interactions that occur in a particular bar on a particular day at a particular hour).  Macro-level orientation takes various forms: those who adopt a conflict approach see large-scale social patterns in terms of how they impose themselves on the behavior of individuals.  That is, they try to describe characteristics of society as a whole in ways that illuminate patterns of interaction among individuals. Those who adopt a functionalism approach ask how the large-scale patterns of society as a whole contribute to the integration of society.

Conflict sociologists find that the distribution of people among position (or statuses) affects decisions even as “personal” as the choice of a marriage partner.  Tepperman & Curtis (2004) use two characteristics of society—heterogeneity and inequality—to predict rates of intermarriage (that is, the frequency of marriage involving people from different racial, ethnic, or religious groups).    Heterogeneity refers to the level of sameness or differentiation within a population:  heterogeneity is high if a population is divided into many different racial, ethnic, or religious groups; it is low if most of the people are the same in these respects.

Inequality refers to the distribution of valued resources such as wealth or education.  In a society with high inequality, such resources are concentrated in the hands of the few, while the majority has very little left to divide among themselves; inequality is lower when these resources are divided more evenly among people in a society.  According to Tepperman & Curtis, higher rates of heterogeneity and inequality encourage people to interact with people different from themselves, and this interaction in turn increases the rate of intermarriage.

It follows that higher rates of heterogeneity and inequality generally promote rather than discourage intergroup relations of all kinds.  The behavior is predicted from the structure of the society itself rather than from the beliefs and attitudes of individuals.  The level of integration of a society is a consequence of the distribution of people among social positions (that is, of the amount of heterogeneity and inequality).

The functionalists take a different perspective on the large-scale integration of society.  These sociologists see society as composed of specialized institutions: patterned behaviors and status/role relationships that fulfill basic societal needs.  For example, economic institutions are responsible for mobilizing scarce resources in order to produce and distribute goods and services that people need.  Dissimilar institutions are held together in an ordered whole because each is assigned the task of satisfying a particular societal need; each contributes to the overall functional integration of the society itself.  Without families, for example, new generation would not be socialized to the dominant values and norms of the society.

As a conclusion, both the Conflict Approach and Functionalism Approach envision society in abstract terms, which sometimes seem quite distant from our everyday experience. 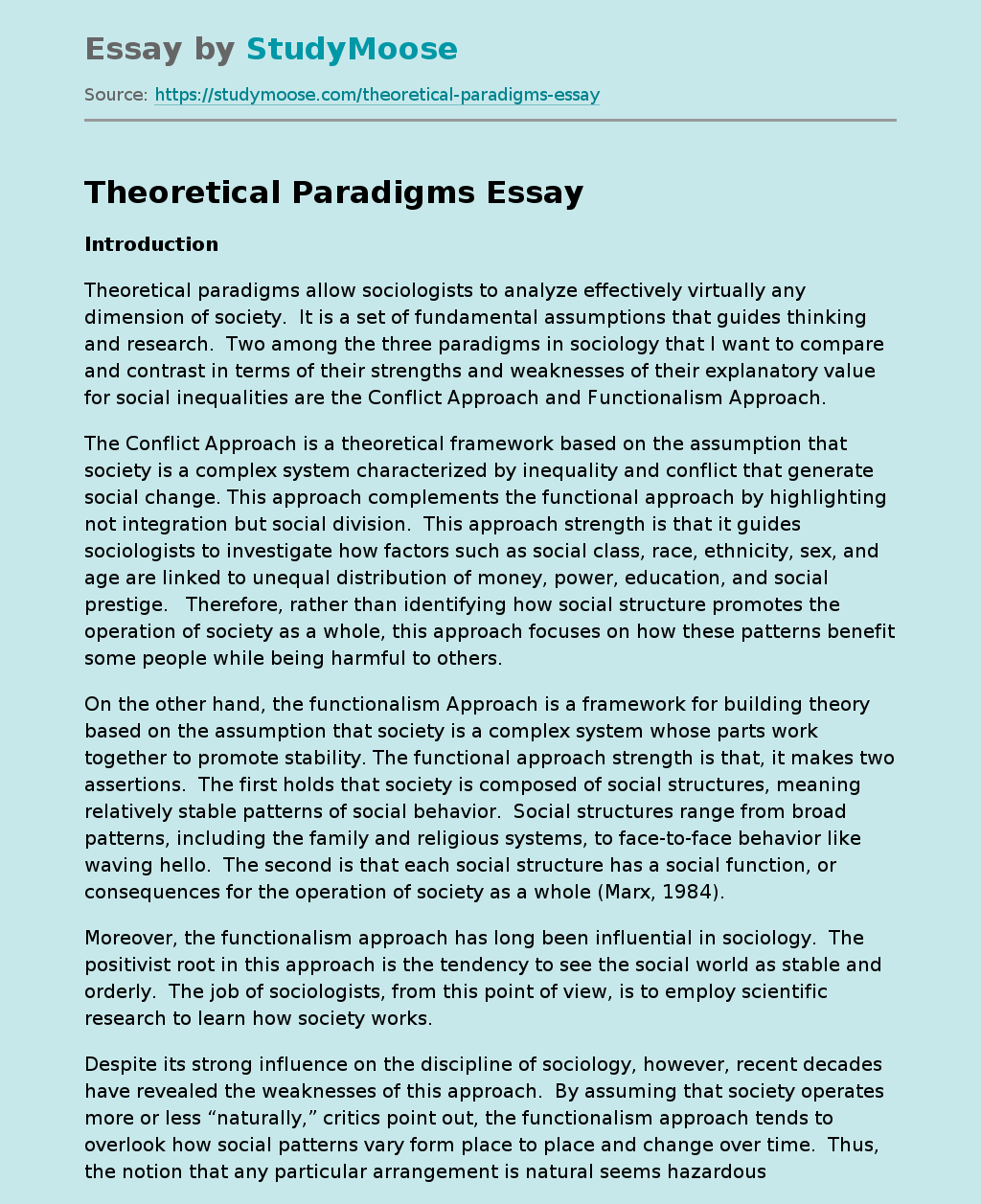