Assess the Strengths and Weaknesses of the Functionalist Approach to Society

Functionalism is seen as a macro-scale approach to society; it sees society as a whole rather than looking at parts of it. Due to this, functionalism sees society as a body (organic analogy), all the institutions work together to make society. This is particularly useful when observing society in order to understand the way in which it functions and the way in which all the institutions (organic analogy: organs within the body) work together to sustain society as a whole.

Don't use plagiarized sources.
Get Your Custom Essay on Assess the Strengths and Weaknesses of the Functionalist Approach to Society Just from $13,9/Page

Functionalism being a macro-scale approach is therefore seen as a strength as it allows functionalist sociologists to observe society, and its institutions, as a whole. Functionalism is also seen as a consensus theory, it sees society as fair and just, and it acknowledges that many societies, including the majority of western ones, have democracy and all individuals within a particular society share the same or similar norms and values. This could therefore be seen as a strength as it acknowledges that democracy does exist in many societies.

Also, as functionalism is a consensus theory where all individuals within a particular society share the same or similar norms and values and sees society as being fair and just; however, it fails to acknowledge that there are inequalities within society, these inequalities could be present amounts social class, gender or ethnicity. However, other approaches, such as Marxism and Feminism acknowledge that there are inequalities within society which raises the question as to whether functionalism is the most appropriate approach to use when studying society.

This is therefore seen as a weakness of functionalism as society does have many inequalities which functionalism fails to acknowledge. Talcott Parsons, a functionalist sociologist who elaborated on Durkheim’s work about society and its functions, claimed that society is like an organism, in particular, the human body. He argued that all institutions, such as the family and the education system, within society function together to maintain society just as the organs within a human body work together to maintain life.

In particular, Parsons identified three similarities between the human body and society; he claimed that they were both systems within themselves – all the parts of a body and the institutions within society fit together in fixed ways. He also identified that these ‘systems’ have needs – the human body needs nutrition to help it sustain life, whereas society needs adequate socialisation in order for society to continue functioning in the way that it does.

Parsons also stated that both the human body and society have functions – the functions of the systems within the human body ensure that the body’s needs are meet thus maintaining life; whereas, in society, the economy functions to maintain the social system. As parsons’ analogy helps sociologists to better understand the way in which institutions in society work together to maintain a ‘healthy’ society, it can be seen as a strength of functionalism as it helps to structure sociologists’ perceptions about how society functions.

Parsons also identified four needs of society and how they are met. He claimed that society needs adaptation, this is where the material needs of society are met; for example, individuals within society work in order to gain their wages which in turn provides for their material needs. He also argued that society needs goal attainment – society needs to set goals and achieve them; this need is met via the political – political leaders set goals for society to achieve and these goals help to improve society.

Integration is another need which Parsons identified, this is where cohesion between the different institutions, such as the family and education system, is promoted; this is done to avoid chaos and conflict. Latency is also needed by society, this refers to the way in which individuals cope with problems in society – they may turn to religion to reduce the strain which has been put on them by society. These needs which Parsons identified can be seen as a strength of society as they help sociologists to understand what society needs in order to function adequately.

However, functionalist sociologist, Merton disagreed with the needs which Parsons identified. Merton claims that Parsons ignored the fact that there are institutions within society that can be dysfunctional, for example, religion can form cohesion but can also cause divisions within society. According to Merton, Parsons failed to acknowledge this. Merton also argues that Parsons fails to differentiate between intended (manifest) and unintended (latent) functions within society and therefore, Parsons’ idea about the needs and functions of society are very simplistic.

Merton also criticises Parsons’ idea about indispensability, he assumes that everything is necessary in the way that it is; for example, children can only be socialised adequately in a two parent, nuclear family, however, Merton rejects this claim as he argues that adequate socialisation can occur even within a single parent family. Due to Merton’s arguments, some aspects of functionalism, such as the needs and functions of society, are seen as a weakness of society.

Overall, in conclusion, the functionalist approach has many strengths and weaknesses about the way in which society functions and the needs it requires. It strengths are seen in the way in which it explains the basic needs and function of society, these explanations can be used by other sociologists to improve and maintain an adequate society. However, other approaches, such as Marxism and Feminism have criticised functionalism due to its lack of acknowledgment of exploitation and inequality which occurs within society. However, overall, it is a balanced argument.

Assess the Strengths and Weaknesses of the Functionalist Approach to Society. (2017, Jan 05). Retrieved from https://studymoose.com/assess-the-strengths-and-weaknesses-of-the-functionalist-approach-to-society-essay 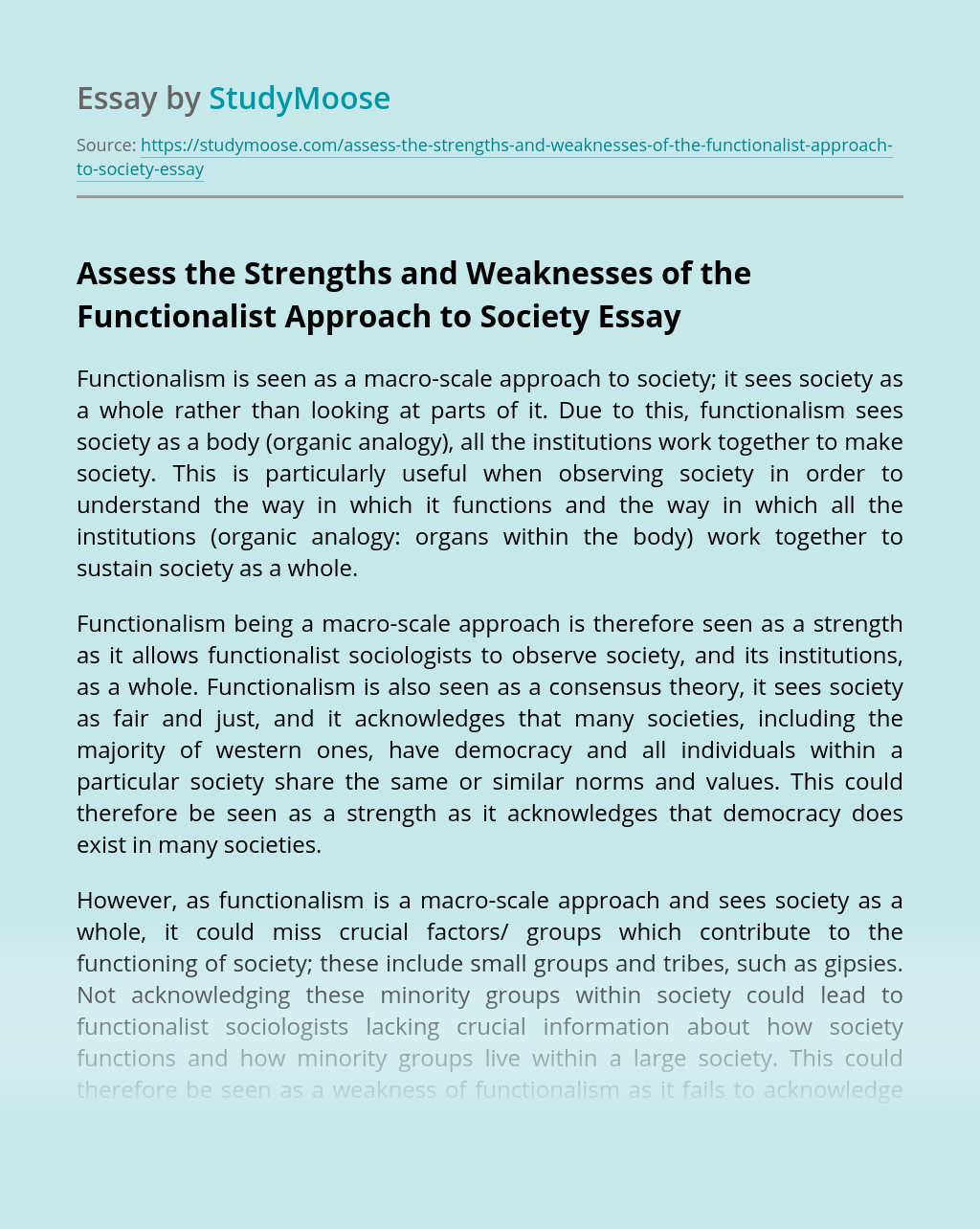 Principles of Safeguarding and Protection in Health and Social care

1. How to recognise signs of abuse: Definition of types of abuse and yours respective signs: 1.1.1 Physical Abuse:According with NCPEA (National Committee for the Prevention of Elder Abuse) Physical Abuse is a physical force or violence that results in bodily injury, pain or impairment. It is a non-accident use of physical force resulting in body harm. Eg. Pushing, force feeding, burning, scalding, etc. see more:explain how the likelihood of abuse...

Social Satire in The Mandrake Root

Comedy is not always made for simple entertainment, but can also be used to present social criticism. Social satire does just that, it disguises a social critique with humor, sarcasm, and wit. Machiavelli uses social satire as a form of high comedy in The Mandrake Root. The idea that all humans are self-interested and the...

Get Essay
Tattoo Culture and Influence in Society

Nowadays, tattoo has been considered a sign of fashion. “A pattern that started growing in America and Europe in the early ’90s, tattooing quickly became so popular that 36% of Americans aged 25-29 had at least one body tattoo by 2003( Julie Genser 2007).” Nevertheless, tattoo could probably bring health risks to tattoo provider. Historically,...

Describe the roles, responsibilities and career pathways of three health or social care sectors Within this assignment I will be discussing three different health or social care professionals and describing their roles are and also their responsibilities. Social worker A social worker’s role is to help people with their issues and also their families, in...

Examine the extend,of and the reasons for family diversity in today’s society. Many sociologists argue that the nuclear family is a universal and dominate institution however there has been an increase in diverse family types for various reasons. Examples of these diverse families are lone parents, reconstitutions and cohabitation families. Although most people experience life...