Functionalists believe that society is based on a set of shared values and norms; this is known as a value consensus. These norms and values socialize its members, which enables them to cooperate with each other so society’s needs are met, this creates social order. It offers a structural and macro view of the family which is top down.

Functionalists see society as being similar to a biological organism for example the human body. This is called the organic analogy.

Don't use plagiarized sources.
Get Your Custom Essay on Functionalist perspective of family Just from $13,9/Page

The human body is made up of various different parts that function together, each part is necessary for the normal functioning of the whole body. Society is made up of various institutions (for example education or family), Functionalists believe that these institutions rely on each other each other which helps maintain social order. If one institution is quickly modified or fails to work with other institutions, society would be dysfunctional and would end up in anarchy. Functionalists compare this with the human body because if one component is unable to work, this often affects other components in the body, which could result in death.

Murdock believes that the nuclear family performs four essential functions for society and its members however he acknowledges that other institutions can perform these functions. He claims that he found evidence of a nuclear family in 250 different societies so he argues that a nuclear family is universal as it fulfills societies needs. The first function is sexual, Murdock believes that sexual intercourse with the same marital partner can prevent social disruption and can strengthen the tie between husband and wife. The second function is reproduction; this allows new members of society to be born which is essential for society because if reproduction did not continue then society would cease to exist. The third function is economical so the family can provide for its members e.g food and shelter. The final function is the education system, this enables the young to be socialized and educated into society’s norms and values, and this suggests the family is a positive feature of society.

However Murdock’s research is limited because he ignores diversity. His research is based on a nuclear family, yet in modern society there are many different family types, for example homosexual couples/lone parents. The postmodernist view believes that the nuclear family is no longer the norm and therefore the functionalist theory is not relevant to today’s society. Another criticism would be that Functionalists do not consider the validity of other family structures such as the Nayar or the Kibbutz who can also perform the four functions. On the other hand, a strength of Murdock’s work is it provides an insight of the families’ importance to society, because they examine how a family functions in society. Another positive to Murdock’s interpretations of family life would be that Murdock could generalize his research because he has studied 250 different societies, which demonstrates how a nuclear family can fit societal needs around the world.

Another Functionalists explanation of the family comes from Parsons who believes that the functions a family has to perform, will affect its ‘shape’ or ‘structure’. Parson’s identifies two types of family structure: the nuclear family, which fits the needs of modern industrial society and the extended family, which fits the needs of pre-industrial society. Parson’s argues that the extended family was multi-functional so it was a unit of consumption and production whilst the nuclear family fits the key needs of modern industrial society: geographically mobile workforce and the socially mobile workforce.

The geographical mobility industries often required people to move to where the jobs were, Parson’s argued that a nuclear family (two generations) would find it more straightforward to move than an extended family (three generations) so the nuclear family is better fitted to the needs of modern industrial society. The social mobile workforce implied that modern society is constantly changing with technology and science also individual status is often achieved (using their own efforts) rather than ascribed (fixed from birth) e.g. the son may ascribe their own status and move away from home and create their own nuclear family in which they are structurally isolated from other members so Parson’s argues that the nuclear family is better equipped that than the extended family to meet societies needs.

Parson’s argues that the nuclear family ‘fits’ (fit thesis) modern society yet he also notices that the changing functions of the family are socially advanced so the family have to fulfill fewer functions for its members, Parson’s argues that the nuclear family specializes in two functions: the primary socialization of children which educates the next generation with basic skills and society’s values. The stabilization of adult personalities is the second function, this enables adults to release tensions so they can return to their place of work and perform their roles efficiently.

Parson’s identifies segregated conjugal roles between a husband and wife. The husband has the instrumental role so he is expected to provide for his family whilst the wife has the expressive role and is expected to nurture her children.

There are many negatives with Parson’s ideology for instance he idealizes the nuclear family and ignores diversity, as there is more than just the nuclear and extended family in modern society. Another criticism would be that Peter Laslett studied the pre-industrial society and concluded that in this society, the common family was nuclear and not extended as Parson claimed. This was because many families decided to have their children when they were older and short life expectancy conveyed that grandparents were not alive when their first grandchild was born. . However there are some positives about Parson’s research, the first would be that Parson’s identifies how families change in society, another reason would be that Parson’s research shows how families can adapt to meet societies needs so a more stable society is created and he argues that family life ‘fits’ and benefits society e.g. reproduction allows new members of society to be created so society’s norms and values are passed on to the next generation, which helps create a stable society and social order.

More broadly, some feminists such as Oakley argues that Murdock and other functionalists neglects conflict and exploitation in a family (e.g. domestic violence), many feminists also believe that within the family, women are serving the needs of men and they are oppressed, this suggest the family is not functional for women as argued by the functionalists.

Marxist’s have a similar conflict point of view as they believe that Murdock ignore the negatives in a family life, as Murdock has an extremely positive view on family life. Marxists ( Engels and Zaretsky)however argue that the family meets the needs of capitalism and not those of family members or society in general, which conflicts with Murdock’s ideology. Furthermore The radical psychiatrists such as Laing argues that the family is dysfunctional as it damages the individual and can lead to mental illness, they argue that the nuclear family is not productive to its members. The New right however supports the functionalist’s view of the nuclear family and suggests they help society to function, however they are an extreme view and have themselves been criticized.

To conclude, Functionalists all agree that the nuclear family is the best to fit societies needs, it offers a positive consensus view, however it ignores women’s positions and ignore how the family feeds capitalism, they also ignore family diversity. To understand the family unit, one must look at all theoretical views as functionalism on its own is too limited a view.

Functionalist perspective of family. (2016, May 07). Retrieved from https://studymoose.com/functionalist-perspective-of-family-essay 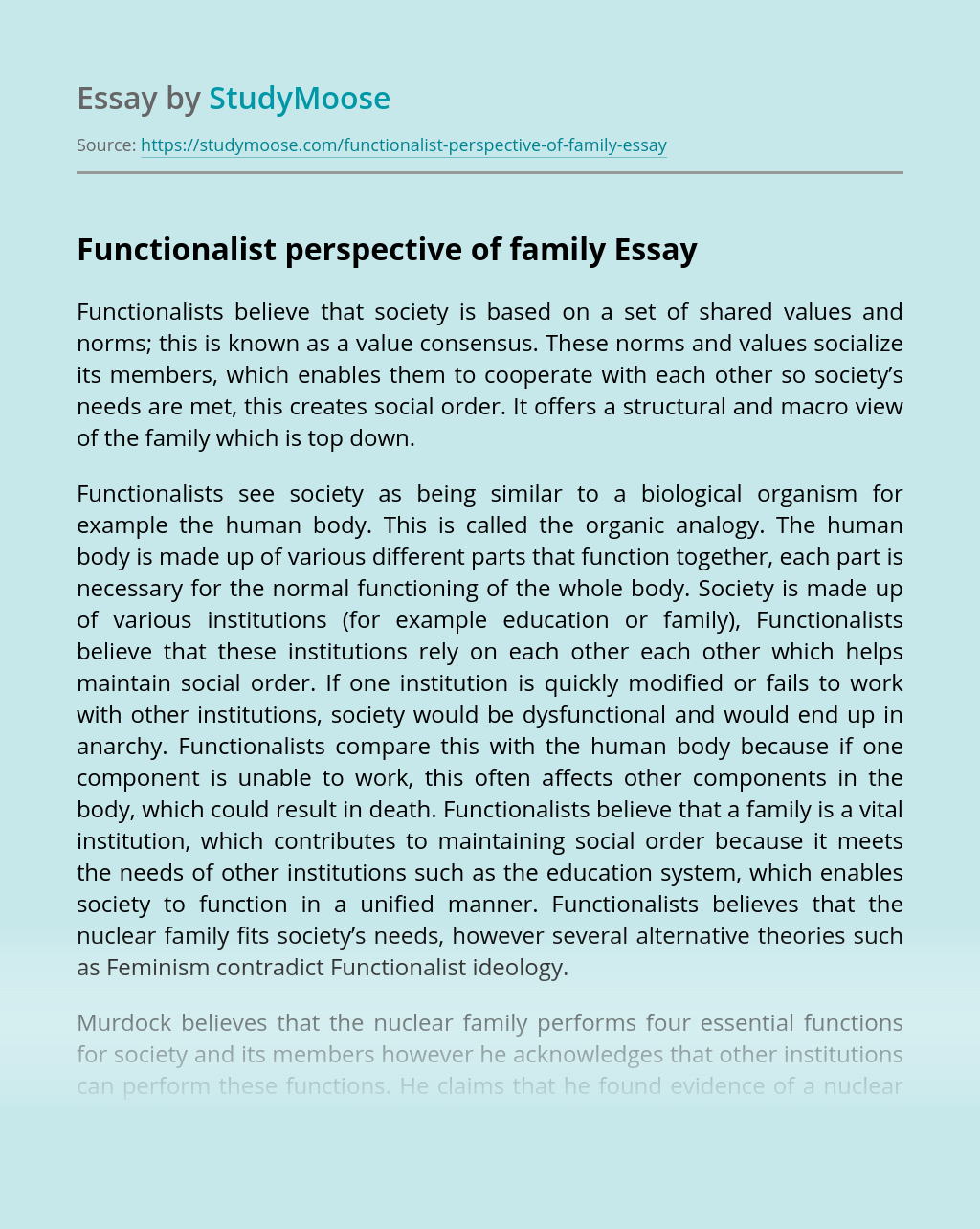 Loss can be explained as many things; the misplacement of concrete products, the ending of a close relationship with a good friend, a goal not achieved or the death of a liked one. Through the readings, posts and actions of this course we have seen that individuals each react to their loss in manner ins...

Who falls in love after seeing each other for only one night. Romeo and Juliet has made some hasty decisions for those few days they were together. What do i mean about hasty decisions is like getting married and not never telling their parents knowing that they hate each other. Romeo killing Juliet’s cousin Tybalt...

Ageing is a concern for all. Our sensitivity to the issue is only heightened when we reach what we commonly refer to as the “ripe old age.” By then, experiencing, hands-on basis, the rudiments of being and growing old. Perhaps upon reflection, actually glean on the blindness and without the knowledge of parents and grandparents...

The film opens with the birth of Magnifico (also called Ikoy in the film). It is clearly discernible at the outset that the boy was born in to a rural poor family. His father, Gerry, is a carpenter but does not have regular employment. It was Gerry who christened him Magnifico because he enjoyed watching...

Impacts of Alcoholism on Family Welfare