With reference to the family, consider how functionalist perspective enhances understanding of the diversity of family in today's society

“The family is a social group characterized by common residence, economic cooperation and reproduction. It includes adults of both sexes, at least two of whom maintain a socially approved sexual relationship, and one or more children, own or adopted, of the sexually co-habiting adult” (Murdock 1949). In this piece of work I am going to discuss the family from the Functionalist perspective.

In order to obtain a more detailed analysis of the Functionalist theory I am going to compare and contrast alongside the Marxism as well as other perspectives, in order to examine the role of the family in society.

Don't use plagiarized sources. Get your custom essay on
“ With reference to the family, consider how functionalist perspective enhances understanding of the diversity of family in today’s society ”
Get custom paper
NEW! smart matching with writer

Murdock’s description of the family is just one of many and I am going to discuss whether his idea of the family is representative of the family in today’s society. Cree (2000) tells us that the family is a very specific and carries ‘many assumptions about men and women, about children, about work, about sexual behaviour and about caring’ (p27).

Murdock’s view of the nuclear family is very traditional, and ‘he based his definition of the family on a sample of 250 societies ranging from hunting and gathering ands, to small-scale farming societies to large-scale industrial societies’ (p81) in order to get a true representation of the family from many cultures and societies (Pilkington, 2004).

When he wrote his definition in 1949, he claimed that the nuclear family was universal, but now families are much more diverse.

The diversity of families today includes extended families, lone parent families, reconstituted families, same sex families (which have been endorsed with the introduction of the civil partnership law), cohabiting families as well as childless couples.

Murdock’s view is becoming outdated and is becoming increasingly hard to achieve, although this is what most people are striving for. Abbott and Wallace (as cited in Cree, 2000) inform us that in Britain approximately only 5% of families conform to the stereotypical nuclear family.

Functionalism is a macro theory, as is Marxism, which means that it looks at society as a whole, rather than individual sectors of society (Cree, 2000). Functionalism is also a consensus theory, which means that Functionalists see society as being in harmony, and that everybody has an equal place in society (Kidd et al, 2003). Cree (2000) tells us that ‘consensus approaches start with the assumption that there is one preferred, ideal family: the nuclear family’ (p32).

Marxism, in contrast, is a conflict theory, and realise the services that the ‘family provide for the state’ (p33), and in particular, the capitalist society (Cree, 2000). Throughout the years our norms and values of everyday life have significantly changed; women are becoming more educated, which has resulted in them achieving higher status in their chosen careers, which means that they are no longer content to stay at home and do the household chores (Haralambos, 1990).

Women are beginning to feel that they don’t get the recognition they ought to have when they stay at home being a housewife, and a system of meritocracy now means that they can fulfill their potential and live their dreams (Haralambos, 1990). The welfare state also gives people more freedom and the chance of escape from the nuclear family if that is what the person wants; the introduction of benefit means that women no longer need to stay with their husband in order to look after their children (Bilton, 1996).

The New Right Theorists think that people should try harder to achieve Murdock’s ideal of the nuclear family; they associate welfare with the rise in divorce rates, the rise in teenage pregnancy, as well as the rise in lone parent families (Ballard, 1997). This is because all of these families would be unable to survive without financial help from the government, and again this means that they are not fulfilling the economic function of the family (Stephens, 1998).

Read examples of how diversity can benefit society

The common link of weaknesses between the Functionalist view and that of the New Right Theorists is that they are both outdated, and relate back to the Golden Age of the Family (Stephens, 1998). Even in the Victorian era, families faced the same problems as we do today, adultery for example, but they were much less publicized, and the reason for this was that it was much more socially unacceptable than it is today (Stephens, 1998).

Another thing that has contributed towards the deterioration of the nuclear family is that women are able to choose now when they have children; contraception is freely available, sterilization is an option, abortion has been legalized and for those who want to start a family later in life there is IVF treatment (Bilton, 1996). These changes have had an enormous effect on the family and are some of the main reasons why Murdock’s ideal is becoming so much harder to achieve. Women are realizing that society doesn’t need to be patriarchal, and that they deserve an equal say in the way society is run.

Radical Feminists consider that because society is so malestream that it results in the oppression of women in society, and they call this Patriarchy (Bilton et al, 1996). At the other end of the scale, post feminists believe that women are now freer than ever in society, and that feminism is no longer necessary, they believe that patriarchy has been reduced on such a large scale (Kidd et al, 2003). This has had an enormous effect on the family and is another one of the reasons why Murdock’s ideal is becoming so much harder to achieve.

The Functionalists strongly believe that everybody achieves their full potential, and because people have different innate abilities and talents, people’s positions in society are also going to be different, which inevitably leads to social stratification (Haralambos et al, 1991). In contrast, the Marxists refuse to believe that this is true in a capitalist society. They believe that if a person has a better starting point, for example they are born into a wealthy family they will do better and achieve more (Haralambos, 2000).

Karl Marx says that the bourgeoisie will always remain at the top, and although the proletariat will always strive to become the bourgeoisie, it is just not possible. He says that status is ascribed, not achieved (Moore et al, 2001). The Interpretive approach have what they define as a ‘dramaturgical” (p129) approach to society; everyone has a role to play in society that has been ready made, and we each have different scripts to follow (Kidd et al, 2003). Berger and Kellner (1964) have suggested that the roles we learn and adopt in the family are ‘ongoing constructions’ (Kidd et al, 2003, p129).

Parsons (in Cree, 2000) tells us that within the family the men take on instrumental roles, and the women take on expressive roles, and that the ‘central division of labour is central to the success of the nuclear family’ (p33). Marxist perspectives do not see this view as accurate and feel that women are merely prostituting themselves for their husband’s wages, and they are providing a ‘safety valve’ (p472) of emotional support for the ‘frustration that her husband suffers at work’ (p472), which keeps the husband from being angry at the working environment and ensures a good workforce (Haralambos, 1990).

Feminists believe that it is women that are exploited by the family, but Marxists argue that both men and women are exploited by the nuclear family in order to become an effective economic unit of production (Bilton, 1996). Murdock sees the family as being symmetrical but Feminists challenge this by saying that women today do triple shifts and carry dual burden; they go out to work, they bring up the children as well as doing the domestic duties in the home (Chhachhi, 2006) Perhaps the biggest criticism of the family comes from RD Laing, who is a Critical Theorist.

Laing says that there is a dark side to the family; he believes that the family is dysfunctional and only serves to make people unhappy. Laing tells us that the family group becomes a nexus where it is argumentative and exploitive, and the result of this is that the individuals can have identity crises, and at a more extreme level it can lead to schizophrenia (Laing, 1964). As the years have progressed it has become apparent that the nuclear family has slowly started to fade away. Laws regarding divorce, abortion and contraception has begun to change the attitudes of society and has encouraged a more permissive society (Davis, 2000).

An alarming statistic tells us that ‘Britain boasts the highest rates of teenage pregnancy in Europe’ (Davis, 2000, p1), and as Baroness Young complains (as cited in Davis, 2000) that ‘marriage is hardly mentioned, it is all about sex and relationships’ (p1). A higher social acceptance of homosexual relationships means that more people are partaking in these sorts of relationships freely, and this has been enforced with the introduction of The Civil Partnership Bill that allows homosexual ‘marriages’, and gay couples are now allowed to adopt children and form their own ‘family’ (www. thicsforschools. org, 2006).

Davis (2000) informs us that young people growing up in today’s society are surround by a huge variety of families, these include ‘heterosexual, gay, step, foster, looked after and single parent’ (p3). This shows us just how diverse families in the 21st century have become, but in the same article Davis (2000) also tells us that what is important in any relationship is ‘security and love’ (p3). When Murdock came up with his definition of the family in 1949, any other variation of family apart from the nuclear family was virtually unheard of.

As society has become more diverse, people have developed different values, and now lead much more varied lives. In conclusion, I think I have shown that Murdock’s evaluation of the family is no longer relevant in today’s society. I think that a more appropriate definition of family would be any variety where there are two generations that are somehow related, either through marriage or biologically, that live together in the same household.

With reference to the family, consider how functionalist perspective enhances understanding of the diversity of family in today's society. (2020, Jun 02). Retrieved from https://studymoose.com/reference-family-consider-functionalist-perspective-enhances-understanding-diversity-family-todays-society-new-essay 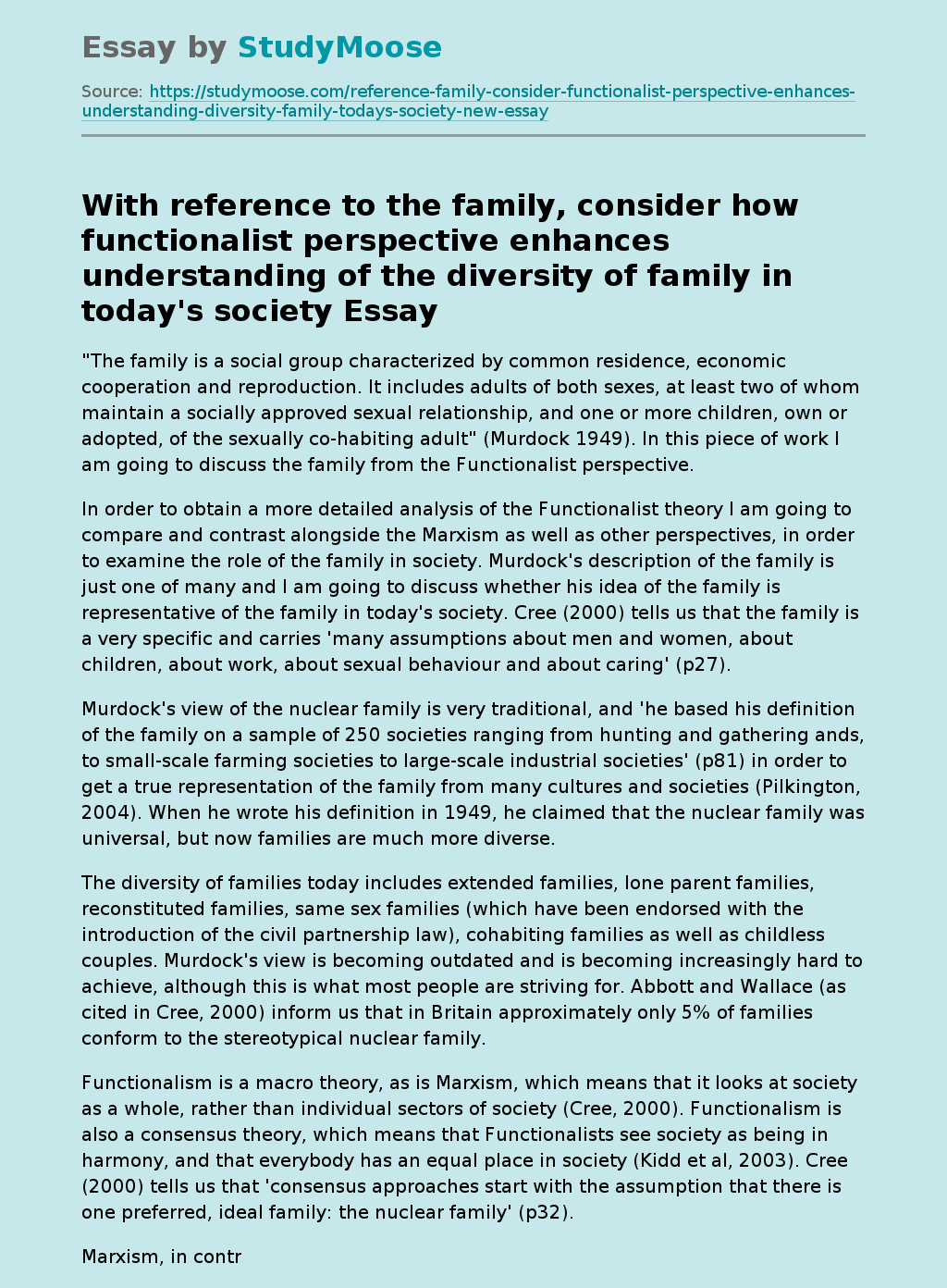