Role is the assigned integral character or current disposition played or acquired by a certain person (Webster 2008: 636). In social psychology, the study and analogy of roles is essential as it influences the behaviour of people towards socialization or interaction with other persons (Myers 2005: 179-80). Parents and children define their relationship by playing their role expectations in such a way that it is congruent with the norms of society (Amankwaa 2005: 25).

For instance, a mother plays the role of a housewife and is more expected by the society to take care of her children.

Another example would be the father assuming the role of the worker and the provider for the family. Lastly, the children live up to their role expectations which include obeying their parents, studying their lessons, and later on, unconsciously internalizing their parents’ detachment behaviour due to the implicit influence of their parents’ role strain or role conflict and role overload (Myers 2005: 179-80).

Role strain between working parents exists when they feel that there is a disparity in carrying out their roles.

This disparity later on becomes a role conflict in which parents feel the stress of playing two or more roles at the same time as they feel burdened with managing their careers and their roles as parents. Therefore, role conflict arises as soon as parents realize the incongruence of their attitude and behaviours.

Thus, the growing children of working parents would have less time to bond and spend time with them, and this will lead to their feelings of lack of social support and social connectedness.

Moreover, this may result in the children’s undeveloped interpersonal skills which can be observed later on as they feel deprived of the persons whom should stand as the model for their behaviours (Myers 2005: 520-32).

Role theory determines how a person will behave in a given situation where one’s perceived roles or disposition is acquired and internalized (Amankwaa 2005: 25). Role theory asserts that roles, inclusive of the gender roles and expectations of norms, culture, and society, direct the way people socialize and interact with one another (Myers 2005: 180). The theory supports the framework of this study: that the roles of working parents have an impact on the children’s socialization attitude and behaviour towards others since parents lack the time to meet and monitor their child’s physical, emotional, mental, and social needs. The child growing with little or without parent’s supervision decreases his or her feelings of acceptance and social belongingness (Amankwaa 2005:25).

Role overload is a part of role strain (Crook 2005: 1). There are two factors that lead to role strain among working parents: (1) (intra) individual’s perception of stress due to prevailing two tasks that needs to be accomplished at the same time, for example, being a mother and a career woman for the female parent; and (2) (inter) the stress accompanying the need to decide on which task is to prioritize and put more attention. A good example of this would be a father who is confused as to which one will he do first: going to office for work or fix a damaged plumb in the bathroom (Crook 2005: 1). In addition, role overload occurs when culturally expected roles of mothers and fathers overlap and interferes with their individual roles as career persons (Crook 2005:1).

Combining these concepts of roles based on the role theory, the researcher concludes that children’s socialization is directly affected by the parents’ experience of role conflict due to the parents’ lack of time spent with children and more time spent at work.  In order to deal and solve this problem, parents have to understand their role functions per se and its dynamics and relationship with other co-existing roles to be able to manipulate the effects of stress in themselves and in their child or children (Crook, 2005:1). 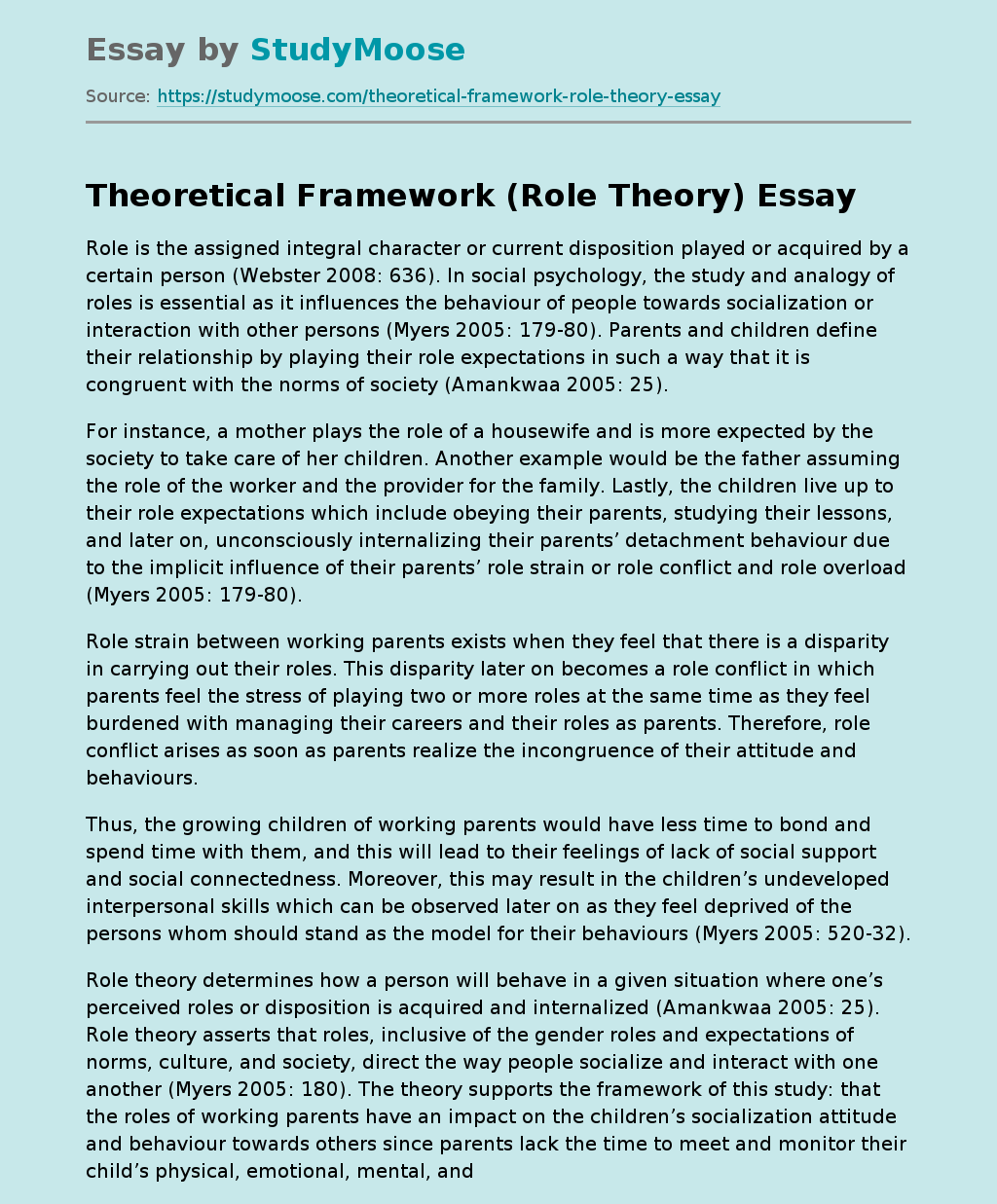