The youth (15-24 years) is a stage in the life cycle of a human being which is most vulnerable to the influences of socializing agents. Although modern psychologists underscore the importance of early childhood socialization in the later development of the human personality (Freud, 1939), social psychologists maintain that the self and therefore, personality is a social product (Cooley, 1902; Mead, 1934).

Don't use plagiarized sources.
Get Your Custom Essay on Theoretical Framework of Sex Education Just from $13,9/Page

He maintains that such cognitive development is achieved through interaction with the environment. Piaget further asserts that the content of what is learned at each stage of the development process depends largely on culture often defined as a people’s way of life.

Adolescence is the last stage before maturity. According to Piaget, it is at this stage that individuals are able to achieve formal abstract thought, can think in terms of theories and hypotheses, can manipulate concepts such as those of mathematics or morality, and can think about personal goals and even ideal social conditions – – a capacity that is often expressed in the idealism of the youth.

Thus the characteristics of the youth today largely reflect their learnings from early childhood and youth socialization processes which they received from socializing agencies first and foremost of which is the family, and those from the school, the peer group, and mass media. These social institutions exist in concrete socio-economic (e. g. social class), political (e. g. form of government), and demographic structures which affect their roles as socializing agents.

A well-adjusted, responsible and well-educated youth is the goal of any society since the roles they play as adults of the next generation will determine the development of that society. Yet, many erroneously conclude that these socializing agents are solely responsible for what the youth are today. Indeed, the major decisions that adolescents take regarding career and roles in life are subject to two levels of influences:

(1) the macro structural environment as conditioned by the socio-economic and demographic onditions, which in turn, is a manifestation of the major decisions in the local political economy, and (2) the influences of the social institutions most importantly those coming from the home and the school (Raymundo, et. al, 1999). In the face of these influences, adolescents manifest their responses, also in two levels: (1) internalized values, attitudes and beliefs about himself/herself and his/her role in society, and (2) behavioral manifestations in more adult roles and functions such as school performance, participation in the work market, and sexual and reproductive behavior. 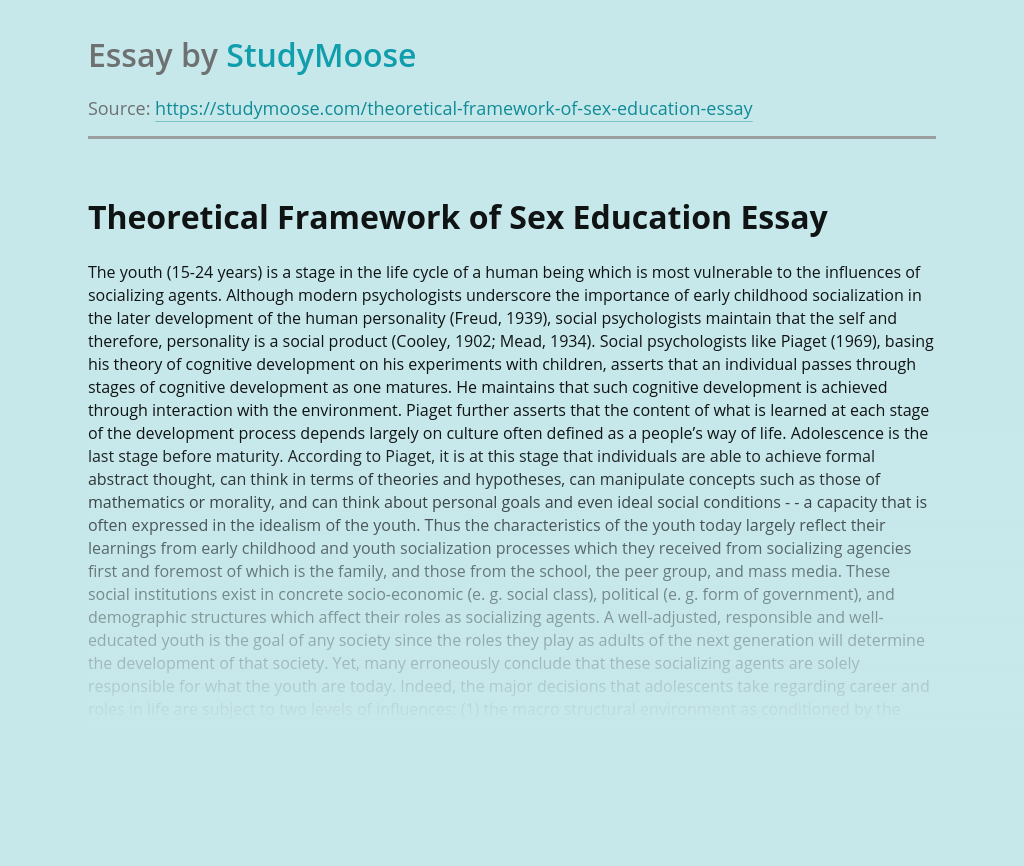 “We use the general term assessment to refer to all those activities undertaken by teachers — and by their students in assessing themselves — that provide information to be used as feedback to modify teaching and learning activities. Such assessment becomes formative assessment when the evidence is actually used to adapt the teaching to meet... VIEW ESSAY

Abstract The decision for school district to implement school uniforms has actually been in existence because the 16th century. School uniforms were initially created for bad kids; however, gradually, schools saw uniforms as a way to bring students together. There has actually been argument whether uniforms enhance academic success while decreasing affiliation of violence. There... VIEW ESSAY

Disucussion on the Noel and Blauner Hypotheses When two distinct groups first come into contact with each other, the conditions of that meeting can determine the fate and mold the relations of the two groups for generations. This is called the “Contact Situation.” Donald Noel and Robert Blauner have analyzed this initial contact and developed... VIEW ESSAY

Mosley refers to the status quo in an unfavorable method and I do agree with his viewpoints. Americans simply don’t seem to have some happiness in their lives any longer, and we should question why that is the case. The educational system doesn’t appear to be any much better when it comes to assisting us... VIEW ESSAY

Developing countries have made impressive advances toward universal primary education. Enrolment in primary education has continued to rise, reaching 90 percent in the developing world in 2011—an increase from 83 percent in 2000. Most of this progress, however, was made before 2004. Global numbers of out-of-school children are dropping too slowly and too unevenly for... VIEW ESSAY