The View from the Bottom Rail

Davidson and Lytle pose an interesting question about racial and class perceptions in their chapter entitled “The View from the Bottom Rail.” Seeking to demonstrate that our understanding of what it meant to be a slave is far from complete, they ask the reader to consider context, expectation, and caste in order to arrive at a more complete understanding of the “peculiar institution.” This social history attempts to supplement, and perhaps even refashion, our understanding of slavery.

One of the first elements of their analysis is to focus on nontraditional subjects.

Turn in your highest-quality paper
Get a qualified writer to help you with
“ The View from the Bottom Rail ”
Get high-quality paper
NEW! AI matching with writer

Historians have so often used members of the highest social classes to inform their work that the result was patently one-dimensional. This bias was in large part due to the production of primary sources; so called “bottom railers” did not leave much by way of written or documentary evidence for the researcher to consider in her analysis. Our understanding of slavery has come largely from white accounts.

It is easy to see how this understanding could be skewed, as the authors’ use of the Squires Jackson example so clearly suggests.

Simple survival dictated that slaves would mislead masters. Beliefs in white superiority meant that masters would manufacture a reality rather than accept actions that challenged it. The authors provide ample materials, both primary and secondary, to demonstrate the white view of slavery.

The development of oral history during the Great Depression offered great hope to historians that a corrective to the white/class bias of the past had been found.

The Federal Writers’ Project included a section whose task was to interview former slaves. Here, at last, was the word of slaves about their condition: The American Slave: A Composite Biography filled nineteen volumes.

But Davidson and Lytle suggest that thre are a number of methodological concerns that should cause us to approach this collection with a degree of skepticism. They also identify a number of sources that describe the methods of conducting oral history, including one of particular interest to students at the University of South Dakota. Dr. Ramon Harris, who taught at the USD History Department, authored one of the books they include in their bibliography.

Caution should guide us when considering any oral history source. Might there be inherent selection biases? Are the interviews drawn from a cross-section of slave states? Were the subjects’ memories clear? Is there a cross-section of age groups? Have subconscious or conscious “cues” influenced answers? It is evident that one must use such evidence in conjunction with other types.

Nowhere are these problems more apparent than in the two interviews conducted with Susan Hamlin. In the first, conducted by a white woman named Jesse Butler, leading questions are asked of the subject. In addition, the Butler led Hamlin to believe that she was from the welfare office. Two vital influences are immediately at play: a black woman in a racially segregated society where blacks are frequently lynched and the targets of daily racial slurs cannot afford to antagonize a white woman, so she is inclined to tell Butler what she thinks the interviewer wants to hear. Second, the Butler’s purported position at the welfare agency may be something that can benefit Hamlin if her answers please Butler. Such a dynamic is not one to inspire an accurate account of the past.

The evidence that this is in fact what happened comes from a second interview. Although there is not conclusive proof that Augustus Ladson, the second interviewer, was black, there is compelling circumstantial evidence that leads one to that conclusion. And that fact led Hamlin to provide a more candid and critical account of slavery than she had given Butler.

Or did it? The authors suggest that there was an equally forceful expectation that Ladson would want to hear a certain type of account. Although Hamlin had nothing to fear or gain from Ladson, there was still reason to augment her story.

It would seem that the moral of this chapter is to exercise caution and a healthy, although not enervating, degree of skepticism when we approach evidence. We must be aware of its merits as well as its limitations.

The View from the Bottom Rail. (2016, Jul 14). Retrieved from https://studymoose.com/the-view-from-the-bottom-rail-essay 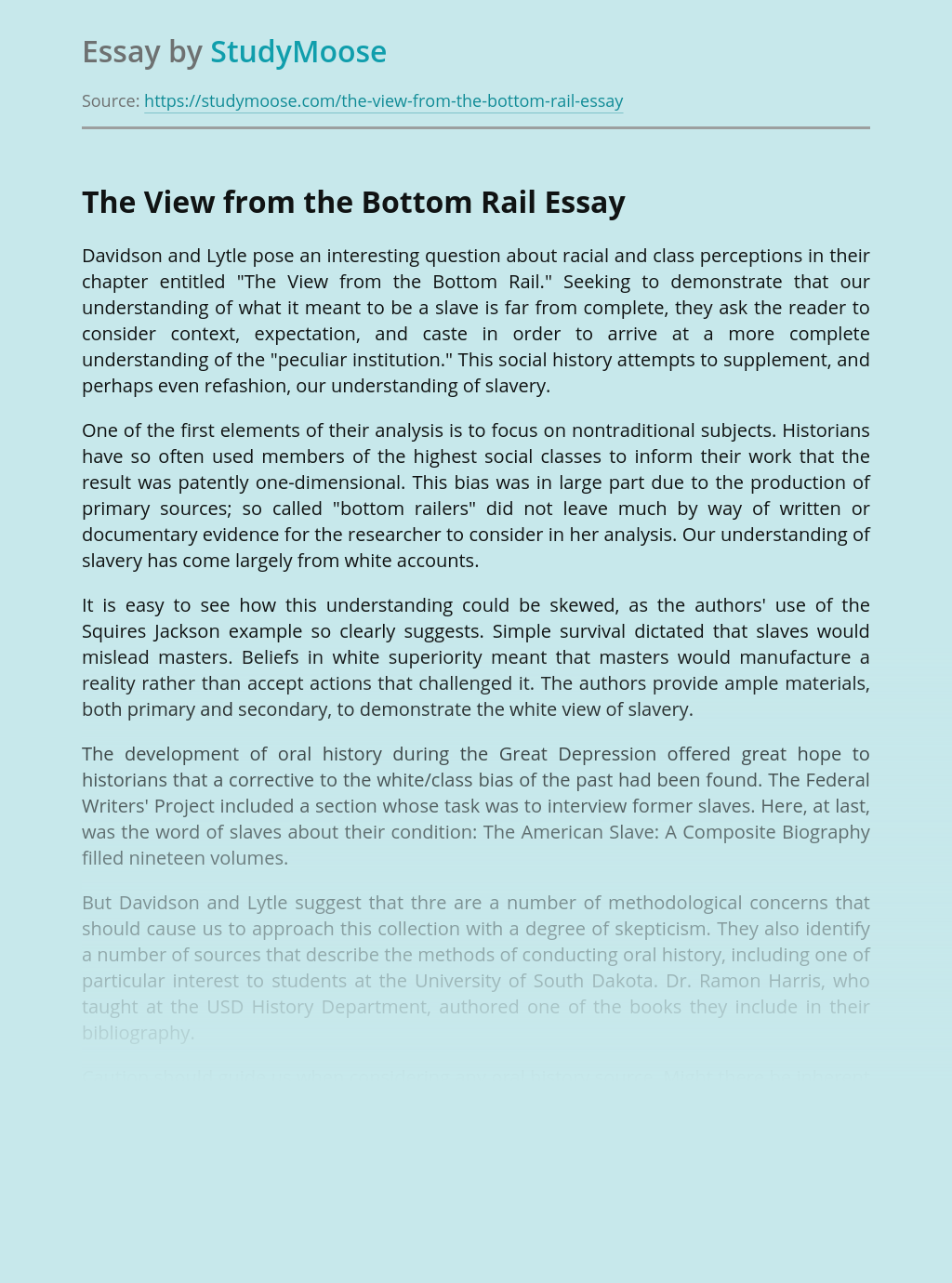 Turn in your highest-quality paper
Get a qualified writer to help you with
“ The View from the Bottom Rail ”
Get high-quality paper
Helping students since 2015
Stay Safe, Stay Original