Cinderella Not a Love Story

A very common fairy tale that we have grown up hearing is the story of Cinderella, a poor girl whose dreams of marrying a prince and living happily ever after, finally comes true after many years of wishing upon a star. Individual writers of the “Cinderella” story may alter the story, but the general concept is always the same. This classic story has been told to millions of children and is known as a great romance. A romance is supposed to have suspense, anticipation, and a deep connection between the two characters that have and/or are falling in love with each other, and Cinderella is none of those.

Don't use plagiarized sources. Get your custom essay on
“ Cinderella Not a Love Story ”
Get custom paper
NEW! smart matching with writer

“Cinderella” is a great rags to riches story, but it is far from a romance.

Cinderella is a 17 to 22 year old girl that suffers from an abusive home life. The abuse Cinderella suffers from is mainly verbal; however, some things in the story could defiantly be considered physical abuse. The abusive is inflicted by her two step-sisters and her step-mother.

Since Cinderella’s mother died when she was a small child it is assumed that she looks to her step-mother for approval the way young girls look to their mother for approval. Depending on the version of “Cinderella” you read her father is either dead, or he is a spineless man who does not protect her from her step-mother and step-sisters. Do to the abusive living environment, Cinderella is looking for a way out, like any young girl would be, that is required to do all the house hold chores and is treated poorly.

When Cinderella hears about the ball she wants to go, but deep inside her she knows that she will not be allowed. In Charles Perrault’s “Cinderillon” a fairy godmother appears, that helps Cinderella in going to the ball. Cinderella knows that if she makes a good impression on the prince that he may want to marry her, which would give her a way to escape her horrible living environment.

In Perrault’s and may other version of “Cinderella” the prince and Cinderella dance until midnight they do not engage in any conversation nor do they kiss. They only simple of affection here is that the prince does not allow anyone to cut in there dancing. When the clock sticks midnight Cinderella leaves quickly because all the fairy godmothers magic is about to wear off. Cinderella accidently leaves behind a glass slipper. If Cinderella didn’t lose the glass slipper the story would be over. That does not show true love. The prince vows to marry the women the glass slipper fits. It’s hard to believe that in the whole kingdom that the slipper wouldn’t fit anyone else.

A few things to think about here are what would have happened if the slipper did fit another and what if the slipper was not left. It is hard to believe that the prince loves Cinderella if he cannot recognize her without the glass slipper fitting her foot. In modern day that would be like saying that one’s husband cannot recognize her without her makeup on. If you love someone to the point that you want to share your life entire life with them then you should be able to recognize them regardless of minor changes such as dressed-up or just done rolling in the dirt.

Cinderella Not a Love Story. (2016, Dec 07). Retrieved from https://studymoose.com/cinderella-not-a-love-story-essay 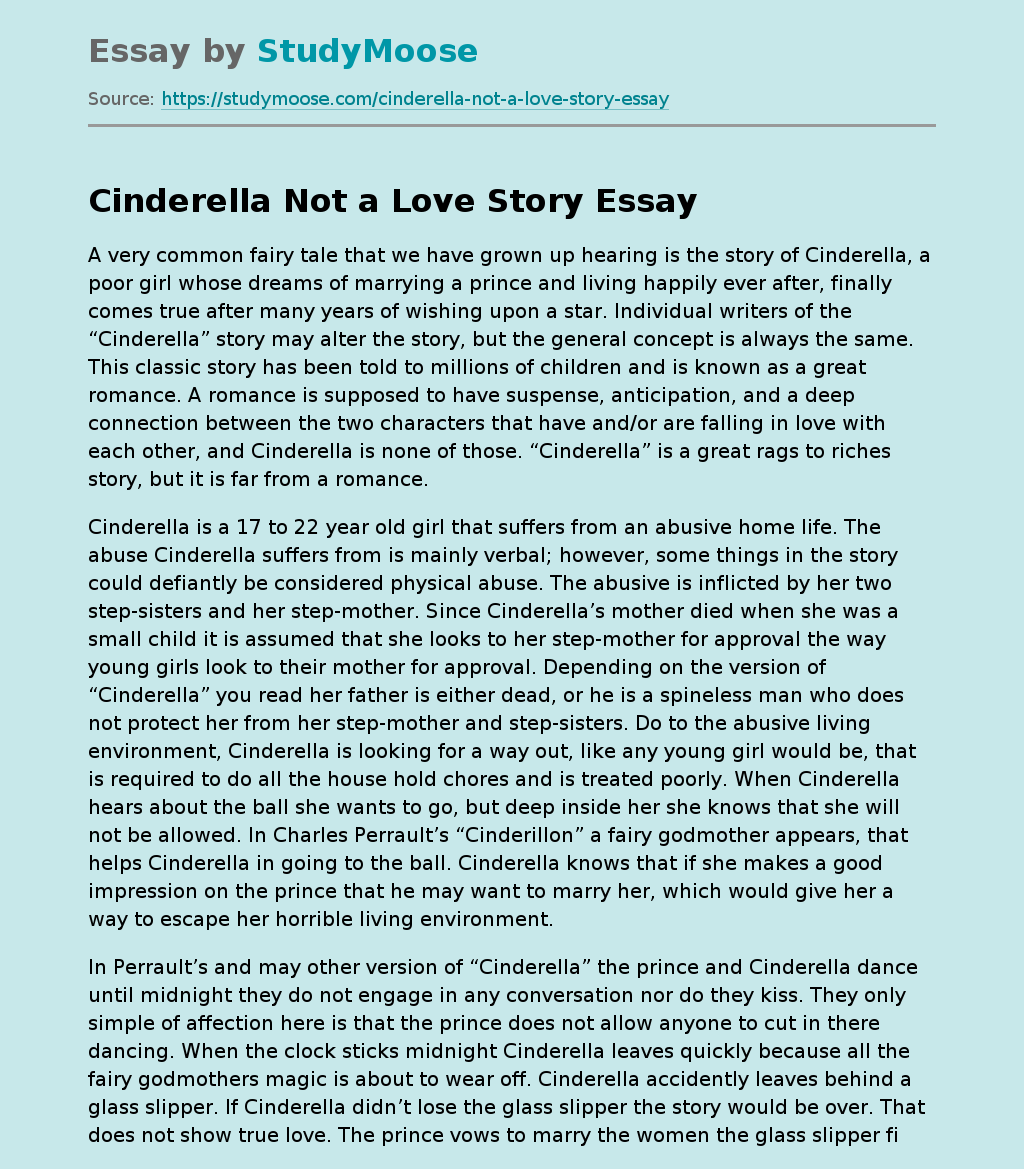