A Horse and Two Goats - Summary

Don't use plagiarized sources. Get your custom essay on
“ A Horse and Two Goats – Summary ”
Get custom paper
NEW! smart matching with writer

In this essay, I will show some differences and similarities to explain for this comparison. In the relationship of Muni and his wife, at the beginning, they suffered these sneers from people surround them. Moreover, in this relationship, we can see clearly the right to keep controlling in their family. In particular, when Muni was rich and took more money, he had enough right to decide and control most of things in his family.

At the same time, he also lorded it over his wife: “He had thrashed her only a few times in their career”.

However, when he loses everything and becomes a poor man, he also loses his right in his family: “Later she had the upper hand”. Gradually, he has to obey what his wife orders him. This seems to be a habit so that’s why he doesn’t have any effort to resist his wife’s orders, just do it: “”Our store is empty today. Dhall, chilli, curry leaves, mustard, coriander, gingelley oil, and one large potatoe.

Go out and get all this. ” He repeated the list after her in order not to miss any item and walked off to the shop in the third street”.

Although Muni follows his wife’s orders, somehow he still underestimates a little bit about women. Perhaps he thinks that because of the case from the postman: “We had a postman in our village who could speak to you boldly in your language, but his wife ran away with someone and he does not speak with anyone at all nowadays”. With Muni, women can have right to make all decision in their family but it does not mean they can do what they want like the wife of the postman. Thus, meanwhile his wife controls everything in his family, he still wants to manage his wife: “Who would if a wife did what she did?

Women must be watched; otherwise they sell themselves and the home”. In the relationship of Muni’s family, they love together but the poverty makes them be emotionless. However, in the bottom of their heart, they still care about each other. In the relationship of the American and his wife, it seems to be better than Muni’s relationship because their financial condition is better than that of Muni. Ruth, the wife of the American, is a good wife and understands thoroughly everything. She serves her husband with all her devoted heart.

With just a simple act, she can recognize and know what she has to do next. We can say that Ruth is so intelligent, this can be proven by the detail: “I told my wife, Ruth, “We will visit India this winter, it’s time to look at other civilizations. ” Next day she called the travel agent first thing and told him to fix it, and so here I am. Ruth cam with me but is staying back at Srinagar, and I am the one doing the rounds and joining her later”. Maybe, a good financial condition is one of the better way to make people understand together and can sympathize with each other.

In addition, Ruth is also a clever wife, she knows how to makes her husband comfortable and have more free in making most of decision. Because the American knows that his wife is reasonable, he all makes decision without her but he also prepares some good evidences for his decision to show his wife understanding. For example, “Ruth may disapprove, but I will convince her. The TV may have to be shifted, too. We can’t have everything in the living room. Ruth will probably say what about when we have a party? I’m going to keep him right in the middle of the room.

I don’t see how that can interfere with the party we’ll stand around him and have our drinks”. Through the relationship of the American, we can see a free culture in America in some aspects but they still keep their happiness and their love. In particular, in this relationship, we can see how the American’s wife gives him his free hands to do anything which can be proven by the freedom in making decision of the American and vice-versa. Also, the American agrees to let his wife have freedom to do anything, such as “Ruth can go by air if she likes, but I will go with the horse and keep him in my cabin all the way if necessary”.

Two above paragraphs show some differences between Muni’s relationship and the American’s relationship. On the other hand, they still have some similarities. To stand out from this is both of wives really love their husband. However, due to some cases, they have different expressing depending on each situation. With Ruth, she shows her love by letting the American have free to decide anything and take care of everything careful for her husband to make him feel comfy when he is beside her. Also, in Muni’s relationship, maybe we don’t see these sweet acts from Muni’s wife but she loves Muni and takes care of him by all her heart.

In spite of colorless acts from Muni’s wife, we can still realize how caring she is! Living in a difficult condition, she is not still far away from Muni. By contrast, she cares that Muni doesn’t have anything to eat. For instance, we have some details like “you are getting no sauce today, nor anything else. I can’t find anything to give you to eat. Fast till the evening, it’ll do you good. Take the goats and be gone now” or “She was sure to go out and work grind corn in the Big House, sweep or scrub somewhere, and earn enough to buy foodstuff and keep a dinner ready for him in the evening”.

At the end of the story, we can see some acts from Muni’s wife, such as “She snatched the notes from him, counted them by the glow of the fire, and cried “One hundred rupees! How did you come by it? Have you been stealing? ”” or “If you have thieved, the police will come tonight and break your bones. Don’t involve me. I will go away to my parents”. From these sentences, we see that poverty takes Muni’s wife to be blind to distinguish where is the truth? She loves Muni very much so she is so painful with her own think that Muni steals this amount of money.

She cries very much. Especially, we can see her extreme pain when she thinks Muni is a stealer. By analysis, somehow we see some basic differences of two cultures in married life. The main reason for these differences is the level of financial condition in each family. In Muni’s family, they are so poor so money controls their living. At first, Muni has all right to make decision and he is respected by all people around him because he is rich. However, when he becomes poorer, everyone is far away from him.

Furthermore, the right to control everything in the family now belongs to his wife. By contrast, in the American’s relationship, because they have a better financial condition, that’s why they are easy to understand together. A good finance is also a factor to make them feel free in doing anything because they can feel more comfy. In addition, tradition in marriage is another factor in changing their love and their treatment in the married life. Therefore, in comparison, these differences and these similarities appear that’s because of financial condition and tradition in marriage.

A Horse and Two Goats - Summary. (2016, Sep 10). Retrieved from https://studymoose.com/a-horse-and-two-goats-summary-essay 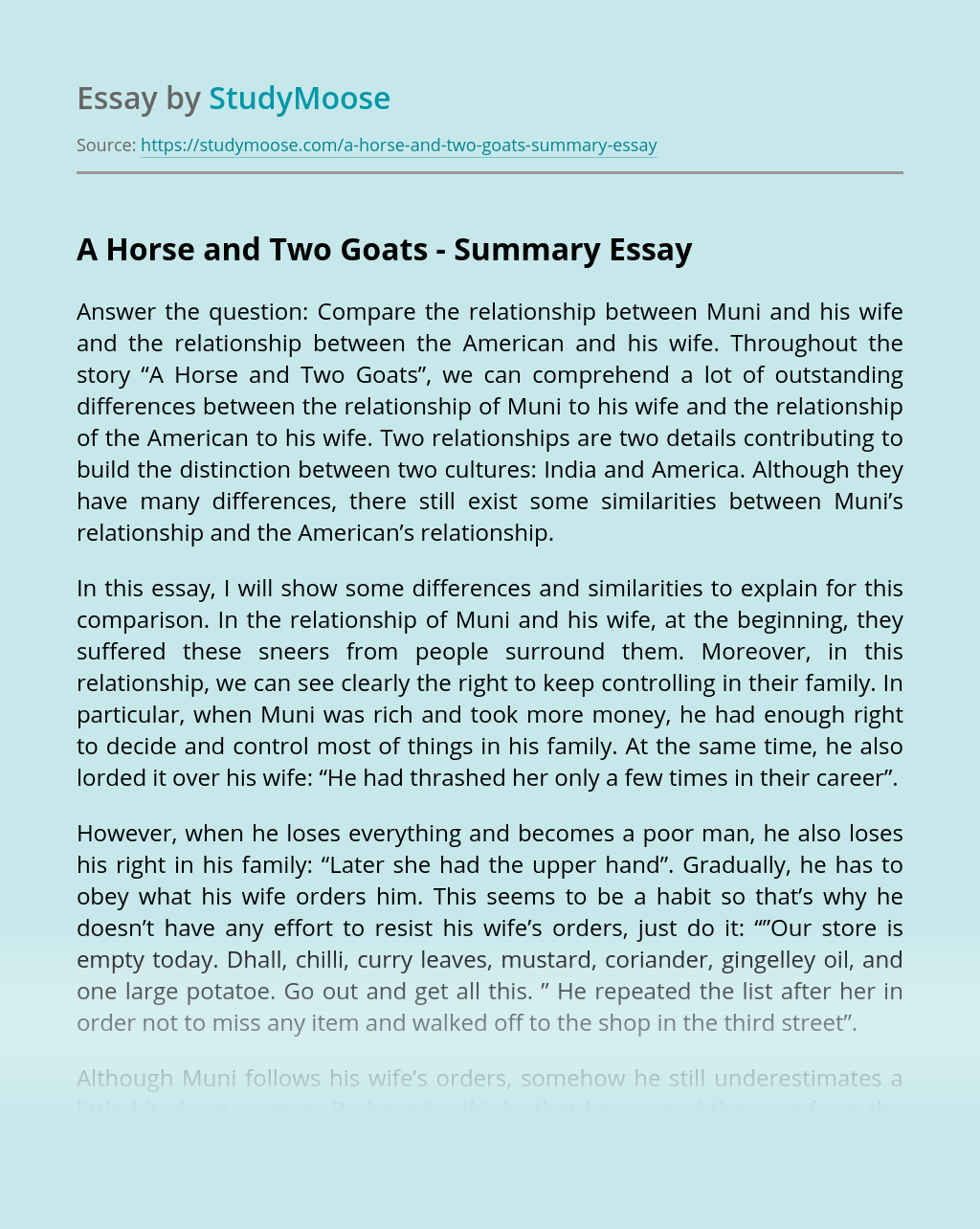