The Use of Satire in Brave New World

Brave New World, written by Aldous Huxley is a utopian novel that uses satire to a great extent. Brave New World takes place in the future, where people are no longer born, and are artificially created. People are placed into five classes before birth and are conditioned to like what they do, and not to think for themselves. Throughout the book Huxley uses satire against religion, family and society.

In this futuristic world, a religion exists that opposes what religion stands for today.

Don't use plagiarized sources. Get your custom essay on
“ The Use of Satire in Brave New World ”
Get custom paper
NEW! smart matching with writer

First of all, the God that the people worship is Henry Ford, the inventor of the conveyor belt and the model-T. They worship Ford because of his vision to increase production by having his workers add the same part to multiple cars during the day. Instead of the sign of the cross that is performed in Christianity, the futuristic citizens make a “T” on their chest, as in the model-T he invented. Instead of saying “O God!” they say “O Ford!” In the book, Christianity is considered a plague of the past.

The world controller says that Christianity controlled what people did and thought and restricted the fun that people could have. The new religion was all about fun and sex. They are taught to almost never be alone but when they are they are to take soma, a perfect drug that eliminates thinking with no hangover afterwards, and recite sayings while having sex with one another.

Brave New World is also a satire against the current, modern family.

The word “mother” is considered an insult in their society, and the word “father” is considered a joke, something to laugh at. The world controller, Mustapha Mond made several references to how corrupt and wrong the family was. Two parents who knew little about parenting were expected

To raise the country’s future productive citizens. There were always conflicts at home, unlike at the beautiful, educational conditioning centers in the new world.

John being called a savage shows irony in Brave New World. John is the character that most resembles today’s values. He does not want to have sex with Lenina, even though she wants him to. He wants to marry her and express his devotion to her in some way, two foreign concepts to Lenina. Lenina rejects this, and just starts taking her clothes off. Throughout the end of the book, John tries to get people to think, but to no avail. John Savage is the voice of reason.

Brave New World is a novel full of satire in many different topics like organized religion, families, and society. I think Huxley saw that we have no technological limits and if we abuse it this is what will happen. It’s kind of like a reminder of not letting this get out of control.

The Use of Satire in Brave New World. (2016, Jul 11). Retrieved from https://studymoose.com/the-use-of-satire-in-brave-new-world-essay 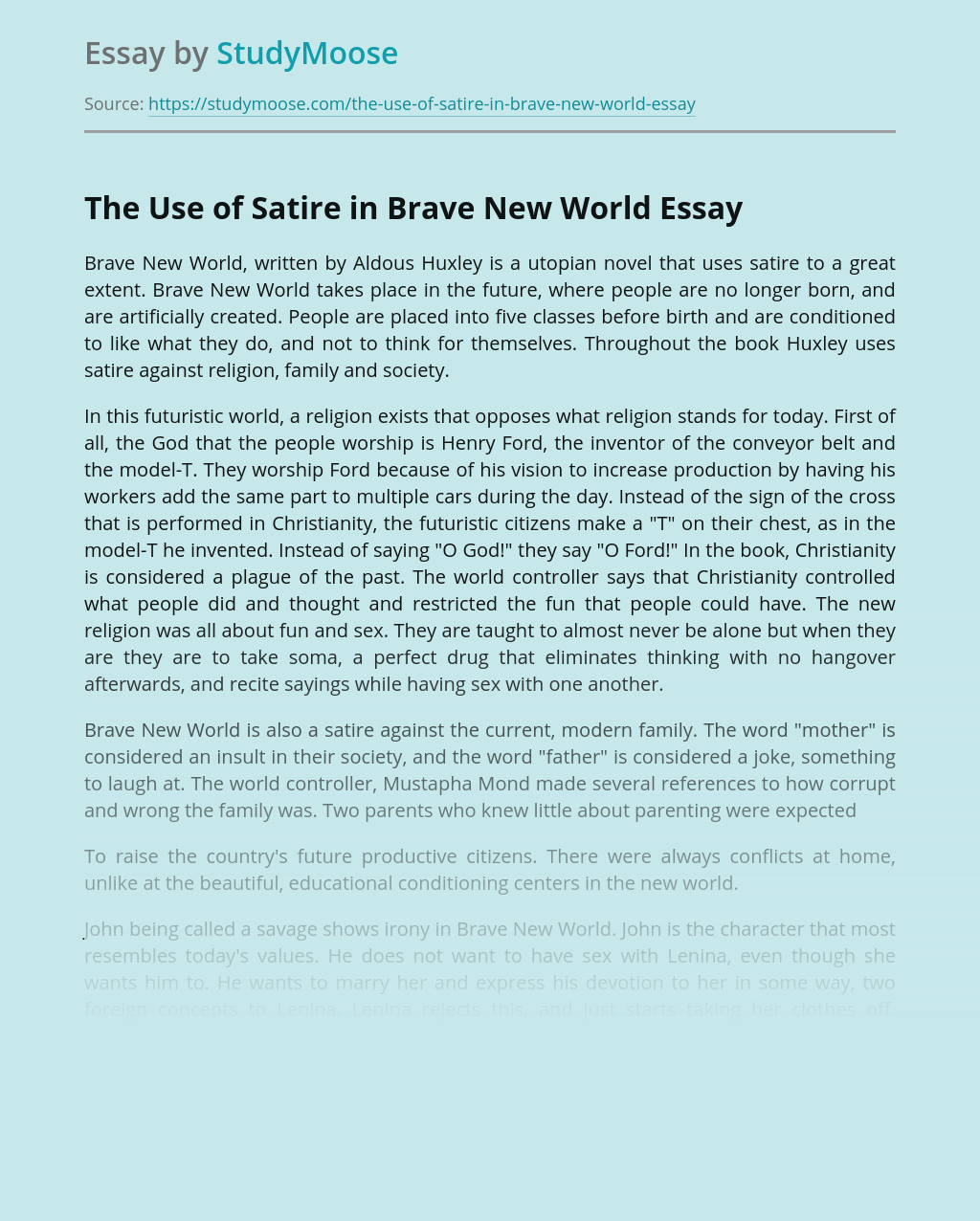