Don't use plagiarized sources. Get your custom essay on
“ The United States Army’s Human Dimension Strategy is a core concept that ”
Get custom paper
NEW! smart matching with writer

The Army defines the Human Dimension The focus of this definition is the Cognitive, Physical and Social components. These terms are defined as follows by the Merriam-Webster dictionary. CognitiveWith the Human Dimension defined the core concept of the Army’s Human Dimension Strategy can be brought to light. This core concept is simple but extremely important, United States Army personnel must be better than the personnel of its’ adversaries. The personnel must be better in terms of the three components that have been defined above; cognitive, physical and social.

U.S. Army personnel must be smarter, more physically capable and more socially adaptive than the personnel of the Army’s adversaries.What this is saying is that the United States of America’s adversaries are rapidly developing technology that evens the battle field between them and the United Stated Military. This brings us to the necessity of the Army’s Human Dimension concept. One of the best ways to fight the loss of America’s overmatch and to develop new means of adapting to threats is investment in the Human Dimension Strategy.

Most conflict throughout Human history has boiled down to one common factor, Humans. Humans start conflicts, Humans engage in conflicts, and Humans finish conflicts. No matter how far technology has developed or will develop Humans will be at the core of the conflict. Humans drive the vehicles, man the weapons and give the orders. The Army has noticed this and has decided that the best way to handle current and future threats in the face of dwindling overmatch is to develop the most base component of conflict, Humans. By developing individuals via their cognitive, physical and social components the Army can enhance the most basic war-fighting component. This will result in every level of war-fighting capability being improved and will help to dominate across military operations as the Army desires.The core concept and necessity of the Army’s Human Dimension Strategy leads to the vision of the strategy. The overall vision is this the Army is capable of developing cohesive teams of trusted professionals that improve and thrive in the ambiguity and chaos of 2025. This is saying that developing the three pre-defined human components will allow the development of individuals that will be able to work as effective teams and that will be able to conduct their missions effectively in whatever environment they are thrust into.Cognitive development will focus on the intellectual development of individuals. This will allow individuals to think critically and develop creative solutions to otherwise unsolvable problems. This development will enable quick and efficient thinking that can easily make the largest difference during a mission or battle. This development will be enabled via the addition of new task to Army development programs, such as the more college like aspect of the Non-Commission Officer Academy (NCOA). By shifting from more traditional battle-drill focused training to more intellectual training the individual’s cognitive development will begin.Physical development has been a part of the Army for a very long time. However the development that has been in place is changing to allow for more capable individuals that excel in high physical demand environments while resulting in fewer injuries. By ensuring that all personnel know and can conduct physical development to standard the Army is ensuring that more and more personnel will be capable of meeting physical demands. This will result in higher success rates of missions and task that require physical demand, while also generating tougher individuals that are less likely to be injured.Social development is the most abstract of the three human development components. It focuses on social skills and acuity that will allow the development of cohesive teams. By developing the social component individuals will be able to work together in effective teams that will be able to accomplish any mission. A strong team can achieve far more than the strongest individual, and the Army recognizes this. Strong social development will also improve operations across the entire scope of the Army. Teams will be more capable, inter-unit communication and co-operation will be more efficient, and individuals and units alike will be more capable of understanding the cultures and societal norms of the operational environment. The enhancement of these abilities will result in higher success rates across missions and operations.The Army Human Dimension Strategy will affect all echelons of the Army, from the individual all the way to the highest command. Individuals will be developed to be more successful and will be capable of solving problems and thinking critically. Teams will be able to work with better cohesion, capable of adapting to changing situations. Squads, Platoons, Companies, Battalions and higher will all benefit from teams and individuals that can solve problems with minimal help from higher.The Army Human Dimension Strategy is one of the most important initiatives the Army has put in place in recent years, and once defined is a strategy that boils down to a very simple but outstanding concept. By developing individuals via their cognitive, physical and social components the Army can guarantee that its’ personnel will be able to outmatch the personnel of its’ adversaries. This outmatching will help to mitigate the loss of advantage due to the closing of technology gaps. Individuals and teams will enable successful operations across all theaters and echelons, enhancing the Army’s combat readiness and ensuring the safety of the United States of America.

The United States Army's Human Dimension Strategy is a core concept that. (2019, Aug 20). Retrieved from http://studymoose.com/the-united-states-armys-human-dimension-strategy-is-a-core-concept-that-essay 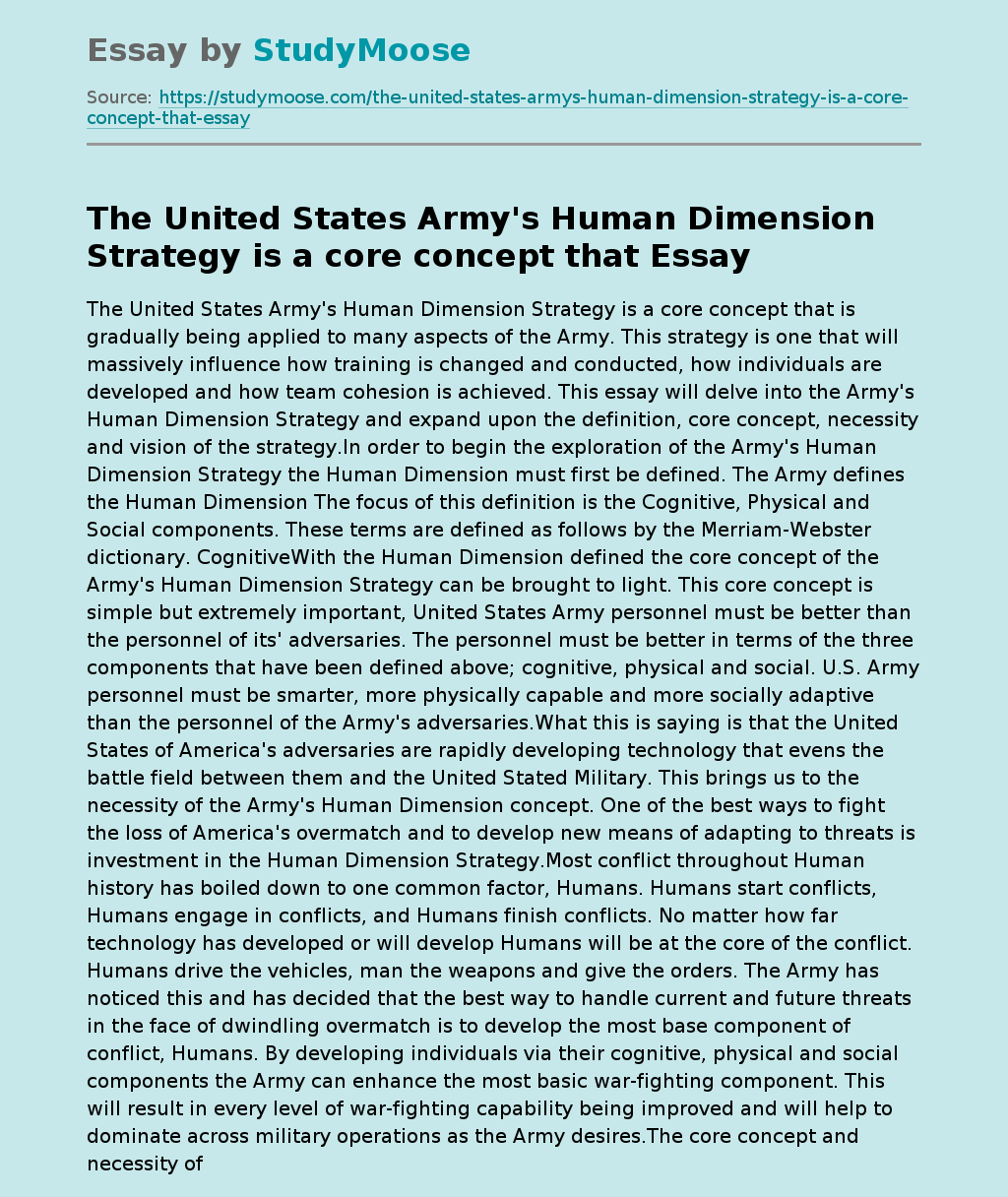