Gender as a Dimension of Social Stratification

Everyone knows and speaks about equality between men and women, and we just conclude that men and women are not equal. Gender is considered a major dimension of social stratification since the responsibilities of both men and women are different which can be traced since old times. The society provides more power to men rather than women resulted consider gender as an important dimension of social stratification. The family is considered as the basic unit of society and that the position of the family in society class is determined by the socio-economic status of the male as the head of the family.

Don't use plagiarized sources. Get your custom essay on
“ Gender as a Dimension of Social Stratification ”
Get custom paper
NEW! smart matching with writer

Women are denied to highly public resources since the society point out that the role of women as mother and wife are devalued even though women’s roles are vital to the well-being of society. Women are moving from being traditional wife facing new challenges of new corporate and societal responsibilities. When roles of a woman are thought to require male direction in an organization, the unequal treatment is directly related to gender roles.

The roles of men and women are settled to amounts of income, prestige and power; these inequalities contribute to the system of stratification.

When we talk about stratification it refers to the different layers or strata of social groups which are thought to be arranged, one on top of the other, in various human societies (Saunders 1990 p. 1). The role of age and gender in the social stratification and organizational structures are characterized by differentiation of status, activities, strengthening of organizational hierarchy and inadequate systems.

Through the process of socialization, people incorporate gender into their own personalities as well as their actions.

Many believe that inequality is the interlocked practices and processes resulted in continuing inequalities in work. Criticizing inequality in the context of work organizations is vital and essential for the investigation of continues creation of complex inequalities since societal inequalities originate in organizations. Women experience new types of exploitation that continue their low status. Women’s share of the labor force is less than and their unemployment is higher than for men, women also earn lower than the male. Women pay may be less than that of men, although organizations require similar education, skills and training.

Immigrant women who are well educated and affluent, still experience racial and gender inequalities as the source of oppression. Women and men come up with assumptions about whom they interact with within the organization, gender differences provide clues to appropriate assumptions followed by proper behaviors. Studies of race inequality have examined the production in different work organizations of racial disparities that contribute to wide racial discrimination. Race when paired with ethnicity, encapsulates multiple social realities is always inflected through gender and class differences.

This theory concludes that researchers should pay attention to the intersections of race, gender and class. These intersectional analyses became generally acknowledged among scholars, but how to create and develop analyses into clear ideas of how dimensions of difference or immediate inequality-producing processes work has been difficult (cited in Holvino & Acker 2006). Governmental and social policies also increases and decreases inequalities based in gender and race which intersect with and constitute a class, civil rights and different movements challenge racial and gender inequalities.

The law does not present view on such gender difference as discrimination. There are proposal for the segregation of women into female-dominated occupations in which many scholars believed that these might be a major cause of gap in terms of gender earnings. Many organizations like cooperatives, voluntary or professional organizations guided by democratic goals find inequality unacceptable and they will try to diminish it. They are fighting and working to close the gap between the jobs of men and women.

Gender as a Dimension of Social Stratification. (2016, Sep 25). Retrieved from https://studymoose.com/gender-as-a-dimension-of-social-stratification-essay 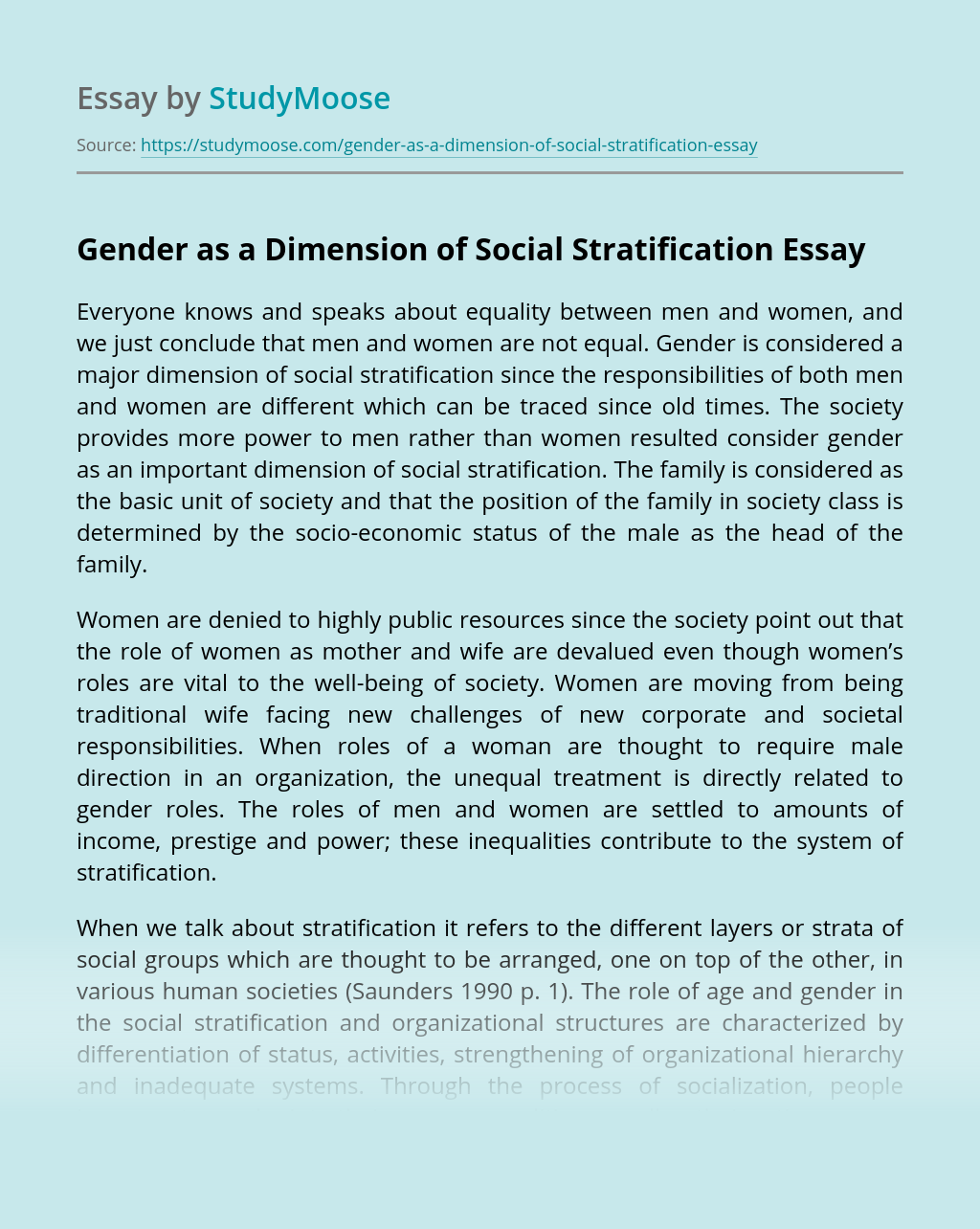