The Hidden Dimension, Edward T. Hall, United States of America, Anchor Books, 1966, 209pp. The Hidden Dimension by Edward T. Hall is an extraordinary book, instilled of great insights despite having been first published over fifty years ago. The book aims to act, more so be, the structure of integrating the mass of rapidly changing information for space as a system of communication and spatial aspects in terms of architecture and town planning. The author, Edward T. Hall, was an anthropologist and cross-cultural researcher born in 1914 and left in 2009.

Don't use plagiarized sources. Get your custom essay on
“ Analysis “The Hidden Dimension” by Edward T. Hall ”
Get custom paper
NEW! smart matching with writer

The key of attraction the book features is that of readily serving vast range of audience such as anthropologists, ethnographers, architects, psychologists, linguists and philosophers. As a student who is currently studying architecture, this book, without a peak of doubt, is extremely helpful as it brings one to various perspective of looking at architecture and associated subjects. The book also disseminates the sensitizing of human understanding of space and its cruciality in architectural domain that is currently been neglected in the society which rather is another perspective the author makes way into, further raising our understanding as readers.

Moreover, the book further helps in clearing the preconceived notion of architecture that many students, like us, would be fancily fascinated with. There stands no particular theme that the book tends to drive its audience towards. However, upon establishing further analysis, one can conclude that it revolves around Proxemics’ and overlapping subjects and issues.

Beginning from culture, the author digs into what he means by the hidden dimension of the aspects like art, language, senses, space, perception and broadly explaining the distances in man by examining folks of various cultures and the way in which these distances originate and govern human behavior at any given moment.

By the term coined that of hidden dimension’ by the author, the author attempts to cast a say that is of what is often not spoken is taken for granted’. Thus, he continues to pull out all the notions taken for granted with regards to art, culture, language, perception, senses and cuts them by explaining them meticulously with high comprehensive explanationswhich successfully as a result opens doors to new and varied perspective of viewing antecedently neglected or unmarked things. Experiments with animals: Calhoun’s Norway rats in a crowded environment committed new acts of aggression, abnormal behavior, and became prey to mass die-off to reinforce the system of communication is pinned. The aspect of what seems crowded to an Indian is not for a Filipino. Indeed, the notions of personal boundaries and consequently, privacy, the play of the senses themselves vary to the point where communications become confused.

The author reveals The Hidden Dimension with an artist’s insight and a scientist’s system; these insights, combined with Mr. Hall’s detailed explanation of differing cultural interpretations of visual, tactile, auditory, and even olfactory space, and how a knowledge of these differences can be used not only to harmonize but to enrich city life, make this book valuable in itself to any student or proponent of modern urban living. Due to various reasons as outlined above of which I have learnt, I would absoutely recommend this book to aspiring architecture students to better comprehend space’an element we mean to craft for the publicour future clients and its aspects. The Hidden Dimension by Edward T. Hall is definitely one to read.

Analysis "The Hidden Dimension" by Edward T. Hall. (2020, May 14). Retrieved from https://studymoose.com/analysis-the-hidden-dimension-by-edward-t-hall-essay 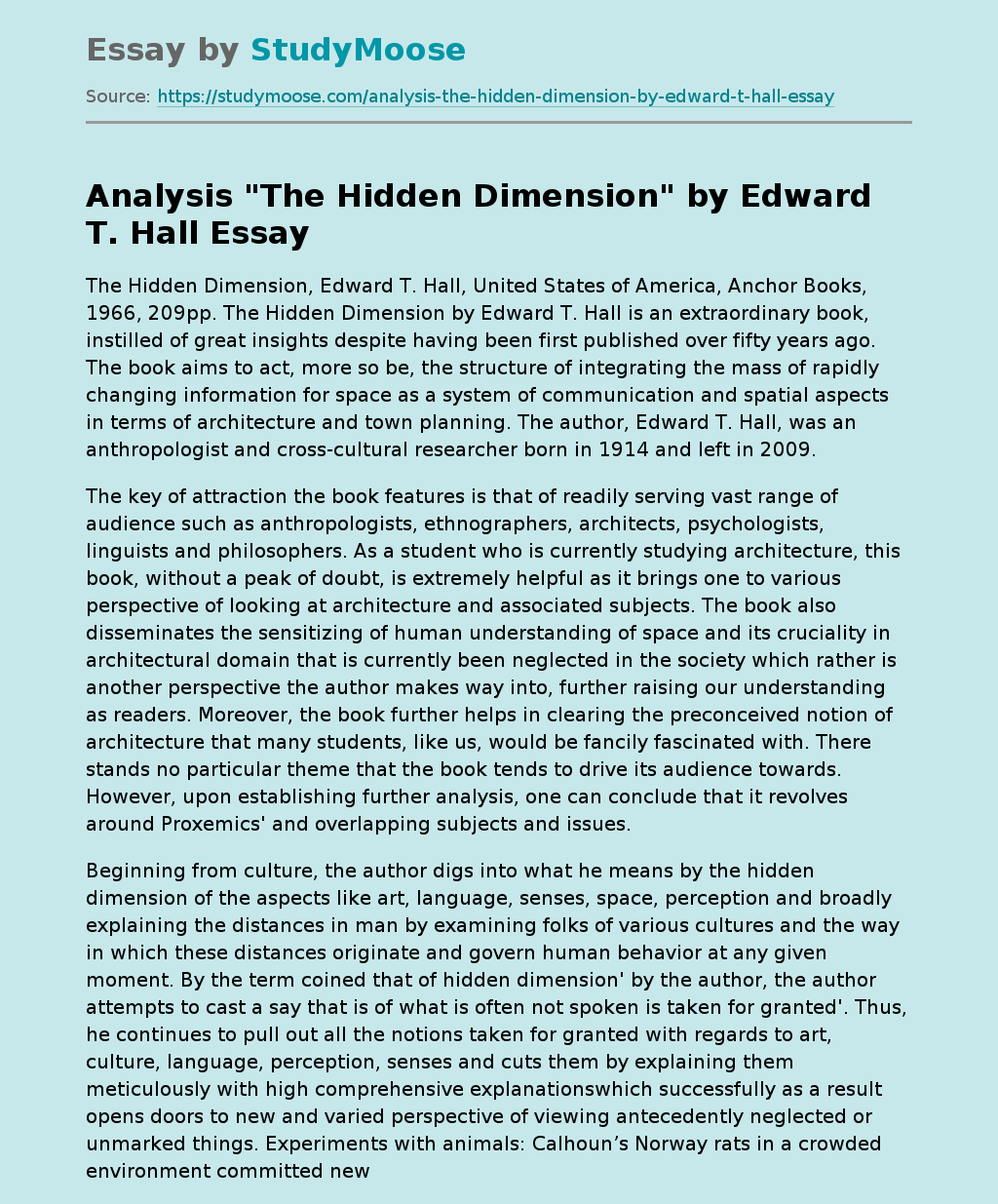