Worldview influences the general scope of morality. Morality cannnot sufficiently stand as a separate discipline from religeon. An attempt to separate morality from religeon cannot be entirely successful. Utilitarianism has been the most powerful and ethical system in the modern times exerting influence across the world. It was propagated most eloquently by John Staurt Mill (1806-1873). Its key dimension is to judge moral action by the happiness it produces or the suffering it eliminates while maximizing benefits to the widest possible audience.

Don't use plagiarized sources. Get your custom essay on
“ Ethical Dimension in Religion ”
Get custom paper
NEW! smart matching with writer

This idea finds a champion in the scientific humanist who feels that relationships between individuals form the basis for the values an individual should hold. On the other hand, Marxism vouches for collective morality where all actions that lead to the prosperity of the socialist system are considered good and hence morally acceptable. The dominant religions in the world have many similarities pertaining to moral thought and conduct. They include unctions, “not to steal, not to kill, not to have certain kinds of sexual relations,” (Smart, 2000, p.

Most of these rules actually make a tranquil society possible because without them, the society would fall into a state of anarchy, especially if these values are not upheld by a critical mass. It Is also clear that the actual particulars of these standards as expessed in practice are different, driven by different needs and environmental circumstances. Arguably, Islam and Christianity have a wide area of overlap in ethical dimension as expressed both in doctrine and in practice. The first area of considerable ethical compatibility between Christianity and Islam is on the universality of mankind.

The central Christian message of love for all humanity places a demand on all practicing Christians to regard human life highly and can explain the vast humanitarian efforts pursued in expression of faith. This explains such sacrifice and devotion to the poor and the sick by well-known persons such as the late mother Teresa of Calcutta. Muslims on the other hand have a religeous duty to give alms to the poor as one of the key pillars of faith, which is an expression of universal brotherhood. Numeous Muslim aid organisations also exist to alleviate poverty and suffering among the disadvantaged in the society.

When approached from the standpoint Comparative religious ethics, many similarities are seen in the actual practice of the two faiths. While Christianity does not provide for Holy wars as expressly as Islam, the concept of just wars found its way into Christian thinking and was the key rationalisation behind the crucades. It became an expression of ones faith to pick up arms and fight for the faith during the crusades as compared to the early church position where military service was considered wrong.

A comparison of the facets of ethical dimension upheld by Christianity and Islam must include a look at the founders, their philosophy of human relationships, and the duty of man towards creator. Christianity has Christ as its face. He preached love and despite being diety gave himself up to be crucified. He shed nobody’s blood in his entire life but his own blood was shed. As if to immortalize his message prayed for the forgiveness of those who crucified him. He nonetheless taught that he would be coming back, this time not as a graceful redeemer, but as king and Judge.

Christianity therefore gets its message of love for all from this picture of Christ. All human life is considered sacred, indeed created in Gods image, and hence in the image of Christ. Christians, in following this pattern are expected to love their enemies and to pray for them. In the area of marriage, a Christian may marry only one wife. Furthermore, it is generally difficult to proceed with divorce as a Christian as Christianity is generally averse to divorce. The Prophet Muhammad is the face of Islam. He was, “not just a man of God; he was the skillful diplomat, statesman, and general” (Smart, 2000, p.

110). This has influenced Muslim ethics so as to accommodate such concepts as holy war (Jihad) against those who impede the spread of Islam, and it goes further to actually reward those who see to it that such persons are eliminated, complete with insuarance for those who die in the process, being regarded as Holy warriors. Islam advocates for universal brother hood and this is enforced by the giving of alms, which basically raises concern for fellow man. Islam builds on this concept of brotherhood whereby all Muslims consider themselves pilgrims, with none having a superior status before Allah.

As Christian cultures have become increasingly westernised, divorce has become more and more acceptable without much conflict with faith. This compares closely with the official Muslim position on divorce. A Christian is required to participate in certain rituals such as baptism and communion as a duty to God, his love for fellow makind notwithstanding. Islam places a similar demand on its adherants where some acts are purely devotional and are considered duty to God, such as pilgrimage to Mecca.

It is indeed clear that although the details vary between Islam and Christianity, the practice of the two faiths is strickingly similar and does not differentiate them sufficiently from each other. Bode points out, “One’s religious being is more than whether or not one is part of some organized religion” (Bode, 1996). References Bode B. A. (2006). Dimensions of Religion: The Ethical Dimension. July 10th 2010, www. quuf. org/sermons/archives/2006-2007/ethical. pdf Smart, N. (2000) . Worldviews, Crosscultural Explorations of Human Beliefs, 3rd Ed, 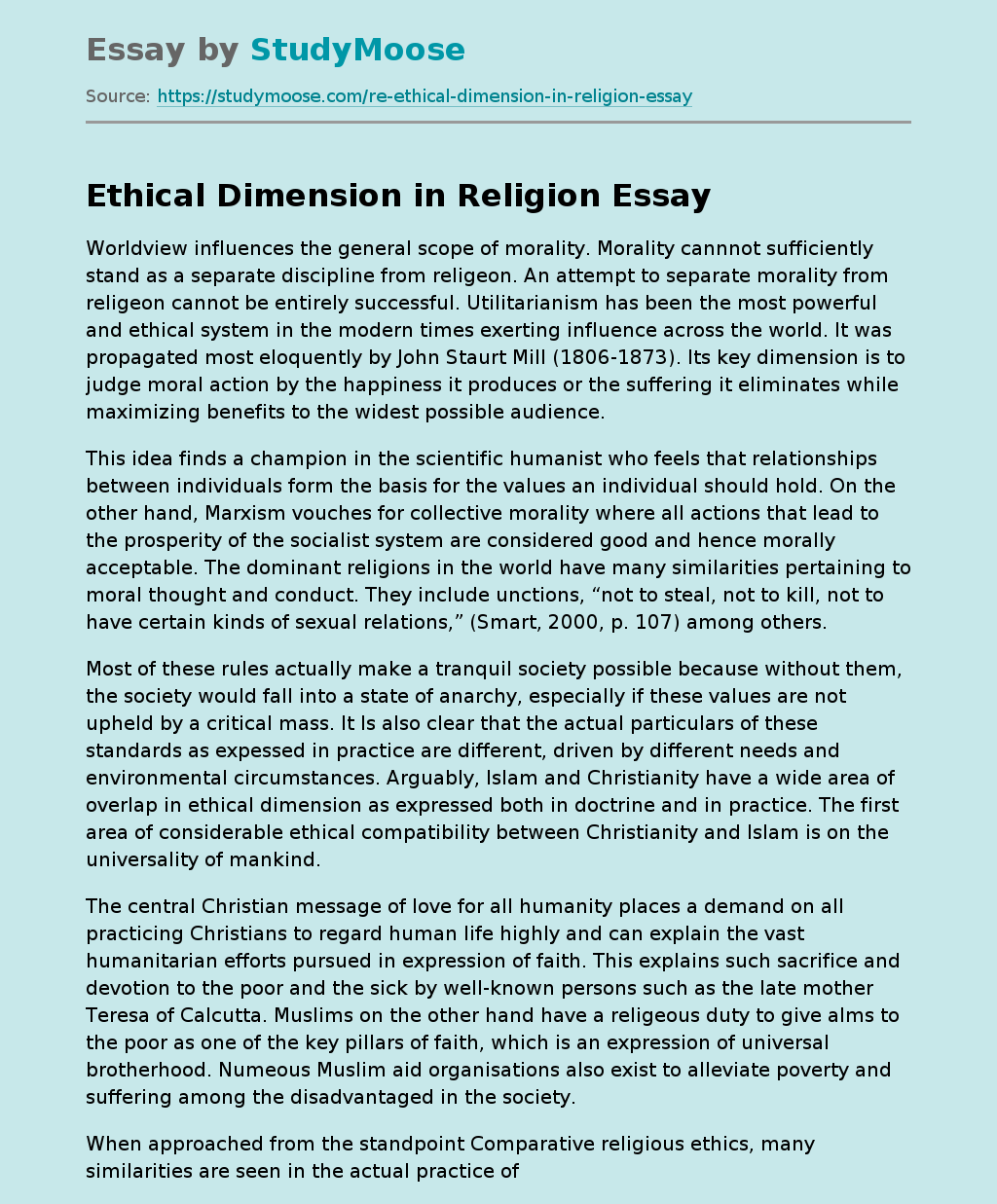