The contemporary Turkish education system was established in 1924 after Atatürk closed the religious schools, set up new secular schools, and made elementary school attendance compulsory. It was many years before the country had the educational infrastructure to provide universal primary education, but since the early 1980s almost all children between the ages of six and ten have been enrolled in school. The most recent data on literacy (1990) put Turkey’s overall adult literacy rate around 81 percent. This statistic broke down as 90 percent literacy among males aged fifteen and over, and 71 percent among females in that age-group.

Right and Duty to be Educated Article 42- … The scope of the right to learn is defined and regulated by laws.

Freedom of learning does not exempt one from his/her commitments to the Constitution .Primary education is compulsory for all citizens, boys or girls, and is free of charge in public schools. Principles regulating the private primary and secondary schools are defined by laws in line with the level that should be reached by the public schools.

The Government provides scholarships and other means to support the education of successful students coming from materially deprived families. The Government also takes measures to help those in need of special education to become useful members of society.

The foreign languages to be taught in such institutions and the principles governing the schools where education is held in the foreign language are defined by laws. Provisions of international agreements are reserved. The public education system provides for five stages of education: preschool, primary school, middle school, high school, and university. Noncompulsory preschool programs established in 1953 offer education to children between the ages of four and six. The demand for preschool education has been limited, apparently because of parents’ unwillingness to entrust the education of small children to institutions outside the family.

Preschool programs are most common in large cities, where, since the 1980s, they have been increasing in popularity and in numbers. Primary education is coeducational as well as compulsory, and encompasses a five-year program for ages six to eleven. Attendance at the country’s estimated 46,000 primary schools was reckoned at 97 percent for the 1994-95 school year. Education officials believe school attendance is lower in villages than in urban areas because it is easier for parents to keep older children, especially girls, at home.

The two-year middle-school program, for ages twelve to fourteen, also is coeducational and has been compulsory since 1972. However, authorities generally do not enforce middle-school attendance, especially in rural areas, where middle schools are few in number and most students must travel long distances to attend. The Ministry of National Education does not publish data on middle-school attendance, but overall it probably does not exceed 60 percent of the relevant age-group. To encourage higher levels of attendance, a 1983 law prohibited the employment of youths younger than fourteen. Middle-school graduation is a prerequisite to access to general, vocational, and technical high schools, and is deemed advantageous for admission to many vocational training programs.

Secondary school education is not compulsory but is free at all of the country’s estimated 1,300 public high schools. The Ministry of National Education supervises the high schools, which are divided into lycée (general) and vocational schools. The lycées are coeducational and offer three-year college preparatory programs. A select number of lycées in the largest cities are bilingual, teaching classes in Turkish and either English, French, or German. Twelve lycées are open to students from the three legally recognized minorities–Armenians, Greeks, and Jews–and teach classes on some subjects in Armenian or Greek.

Higher education is available at several hundred institutions, including professional schools and academies, institutes, and conservatories, but primarily at the twenty-seven public universities, which enrolled more than 450,000 students in 1993-94. In the mid-1980s, when Özal was prime minister, his government authorized Turkey’s first private university, Bilkent, in Ankara. The university law of 1946 granted academic autonomy to Turkey’s universities. However, government policies since the 1980 coup, especially a 1981 law on higher education, have institutionalized extensive government interference in university affairs.

The military leaders believed that the universities had been the center of political ideas they disliked and perceived as harmful to Turkey’s stability. They thus sought through the 1981 higher education law and applicable provisions of the 1982 constitution to introduce both structural and curricular changes at the universities. For example, the constitution stipulates that the president of the republic may appoint university rectors, establishes the government’s right to found new universities, and assigns duties to the Council of Higher Education (Yuksek Ögretim Kurumu–YÖK). The higher education law prohibits all teachers and matriculated students from belonging to or working for a political party and requires curricular standardization at all universities.

The YÖK consists of twenty-five members, of whom eight are appointed directly by the president, eight by the Interuniversity Council, six by the Council of Ministers, two by the Ministry of National Education, and one by the General Staff of the armed forces. The chair of the YÖK is appointed by the president of the republic. The YÖK’s powers include recommending or appointing rectors, deans, and professors; selecting and assigning students; and planning new universities. The YÖK also has authority to transfer faculty members from one university to another. The YÖK effectively has reduced the faculty senates, which prior to 1980 had authority to enact academic regulations, to mere advisory bodies.

Education has continued to serve as an important means of upward social mobility. Annually since at least 1975, the number of students applying for university admission has exceeded the number of available spaces. To qualify for admission, every applicant must pass the nationwide university entrance exam, which is designed, administered, and evaluated by the Center for Selection and Placement of Students. During the early 1990s, more than 100,000 applicants sat for the entrance exam each year. Scoring is based on a complicated system that assures that the number who pass does not exceed the number of available spaces.

Even if an applicant qualifies for admission, the individual’s actual score determines whether he or she may study a chosen discipline or must take up a less preferred one. In addition to the five levels of education described above, the system provides special education for some children with disabilities, as well as a wide range of adult education and vocational programs. Labor specialists consistently have cited inadequate skills as a key factor in Turkey’s high level of unemployment, which during the early 1990s averaged 10 percent annually. In 1995 half of the urban unemployed had only a primary education, and an estimated 40 percent of pupils dropped out of school upon completing this level of education.

Since 1980 the Ministry of National Education has conducted major literacy campaigns aimed at the population between ages fourteen and forty-four, with emphasis on women, residents of the urban gecekondus , and agricultural workers. The ministry also has provided primary, middle school, and secondary equivalency program courses to upgrade education levels. In addition, through its Directorate of Apprenticeship and Nonformal Education, the ministry provides nonformal vocational training to people lacking required skills, such as school dropouts, seasonal agricultural workers, and people in the urban informal sector.

The World Bank , which has provided funds for industrial training programs since the early 1970s, has been a major source of support for nonformal vocational training programs. These programs are intended to provide skilled personnel above and beyond the supply from the formal vocational education system, which was projected to meet 86 percent of the estimated industrial demand for skilled and semiskilled workers through 1995. Government plans have provided for a major expansion of the nonformal vocational training system; 650,000 additional people are expected to receive training in employment-related trades, including 150,000 to be trained in industrial skills during 1994 and 1995.

Although the government program was expected to improve the quality and availability of skill education in less-developed regions such as eastern Turkey, the intense fighting there since 1991 has disrupted training. Futurists predict increasing demand for higher education in the next century. At the same time, resources for education threaten to become more scarce. To address this issue, many learning institutions are looking to distance education as a means of sharing resources and reaching students. Meanwhile, the rapid development and decreasing costs of communication technologies, including microcomputers, the Internet and the Web, are affecting the delivery of distance education and expanding its potential audience (Wurster 1997).

The distance education literature reflects the increasing interest in the potential of current technologies to alter traditional teacher-student relationships. The impact of this trend is also described by John Noon when he states, “Distance learning courses are offering students new flexibility in course and even campus selection, causing many institutions to begin redefining themselves”(Noon 1996). Fiber optic technologies bring both new opportunities and new concerns to the classroom. During the past decade, information-systems have undergone a metamorphosis. Emerging hypermedia information systems, such as the Web, have engendered a myriad of applications.

The attributes and resources of the Web provide a meaningful learning environment where learning is fostered and supported (Khan 1997). Virtual classrooms on the Web have the potential to offer a superior learning experience through increased immersion, fidelity and learner participation in the community of educational practice (Mirabito 1996). From this point of view, John Hedberg and Shirley Alexander from Australia summarized the following number of generic capabilities that can be examined as possible aspects of a learning context which might call for research into the efficacy of the technology in improving learning outcomes (Hedberg and Alexander 1996). Conclusion Today, the most important and the most productive duty of all of us is the national education affairs. We have to be absolutely successful in this area and we shall.

This is the real salvation of a nation. We have to improve our country in the areas of science, culture and prosperity, to develop the already productive abilities of our nation and to give the coming generations a robust, unchangeable and positive character.. The method to be applied in education and instruction is to make knowledge a practical and useful tool that ensures success in material life rather than an accessory, a tool of administration, or a modern form of pleasure. Education must be free from all superstitions and foreign thoughts, be of high quality and have national values and a patriotic understanding. National education must be secular and based on a single school principle. Our objective in education is to raise citizens who shall increase the civil and social values and improve the economic power of the society. 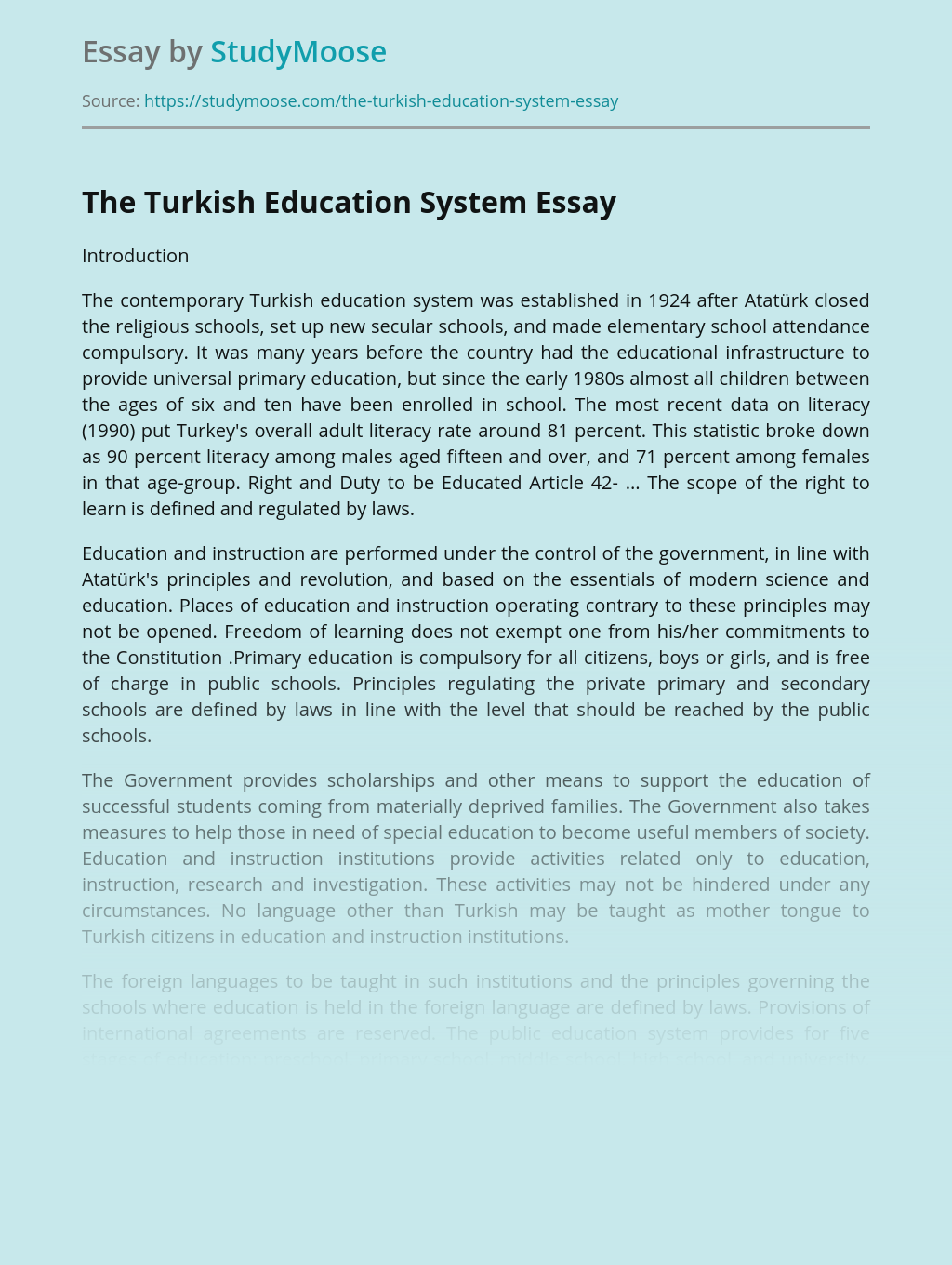 Don’t waste time
Get a verified writer to help you with The Turkish Education System
Hire verified writer
$35.80 for a 2-page paper
Stay Safe, Stay Original