The True West Play About Dreams and Aspirations

The True West Syndrome is the feeling of dissatisfaction and disconnection to the reality caused by the illusion of a better future being obtainable in the true West. The greediness nature of humans and the desire for perfection is well demonstrated in Sam Shepard’s True West. The title, True West, provides the irony of not only being next frontier and greater opportunity but also creating an illusion of potential success and imagination of a glorified future. The two brothers, Austin and Lee, portray the case of True West Syndrome to the audience.

Don't use plagiarized sources. Get your custom essay on
“ The True West Play About Dreams and Aspirations ”
Get custom paper
NEW! smart matching with writer

Lee is an alcoholic with no structure in life, who is eager to escape into his creation of the true West. While his younger brother, Austin, is a completely different character. He is a screenwriter living by the norms of society and initially satisfied with his life. Lee believes his movie idea depicts the ideal true West while Austin sees Lee’s idea as very unrealistic.

However, later on, Austin falls into the true west syndrome by being subjugated to believing Lee’s depiction of the true West and both brothers never being satisfied with where they are.

Proficient in: Dreams And Aspirations

Two very different people are enchanted to the possibility of the true West and let go of the current situation. They are just chasing the true West that does not exist. There is only the idealized vision of the West fantasized by people who are hoping for better lives and dissatisfied with their lives. The true’ West does not exist at all.

It is just a mechanism for people to use it as an escape from reality and avoid present, and never be able to find happiness in life. Shepard utilizes the two very different characters to notify the audience that anyone could be allured into the falsified dream of the perfect future by visualizing the innate problem caused by society and the greediness nature of humans to want what they do not have.Shepard’s choice to have two very different characters is to embody the tendency of humans to want something that they do not possess.

Austin and Lee are very different in their lifestyle and characteristics. Lee is very free-willed and lives a nomadic lifestyle while Austin is an Ivy League graduate screenwriter with a structured lifestyle dictated by the society. The two innately different characters clash in the beginning. They lack in understanding of each other’s lifestyle and personalities causing them to distance themselves from each other. However, deep in their thoughts, Austin and Lee’s envy for each other. The forced interactions between the characters spark an interest and desire to live one another’s life. Towards the end of act one, Lee confesses to Austin that he has always wondered what’d be like to be [Austin] (Shepard 32). Lee envies Austin’s ability to thrive in the society.

Austin also admits that he thought to himself, Lee’s got the right idea. He’s out there in the world and here I am. What am I doing? (32). Austin in the other hand craves for freedom that he does not have in his life and envies Lee’s ability to live carefree without any pressure from the society. Lee adds that he used to picture [Austin] walkin’ around some campus with yer arms fulla’ books. Blondes chasin’ after ya’ (32). Lee did not envy Austin’s real life but rather the fantasized version of Austin’s life that Lee created. Without knowing each other’s life completely, they envy the idealized version of the lifestyle they think one another is living. The point that Shepard is trying to make is that neither should envy the other because they are both envying the falsely idealized life of one another.

Both characters do not know the reality of the live of one another and assume the life of each other to be exactly what they desire. However, the human tendencies to strive for the better causes a problem in falsely thinking the possibility of a better life. As the play progresses, both Austin and Lee fall into the trap of glorified lives of each other and longing to live the life they fantasizes. In scene eight, Austin expresses his desire to follow Lee to the desert. What if I come with you out to the desert? (57). Austin yearns for Lee’s life in the desert that seemed to be a glorified dreamland, the true West. Contrarily, Lee striving to earn Austin’s stability and status in the society through screenwriting and is sick of unknown adventures. This grass is always greener on the other side’ mentality leads both to forever be lost in the hopes to live in idealized West that does not exist and dissatisfied with their lives.

Throughout the True West, both Lee and Austin express their dissatisfaction to their lives in various ways as casualties of True West Syndrome. Driving Lee’s envy for Austin’s monetary success and stable lifestyle is his overwhelming dissatisfaction of his life. As envy and greed build up within the two brothers, they explain their dissatisfaction to their current situations. In scene eight, Lee explains his unfortunate decision to live his current life. He expresses his frustration, I’m livin’ out there cause I can’t make it here (59). Unlike the beginning of the play where Lee was shares his amazing lifestyle in the desert, he is expresses strong negativity towards his life after the exposure to the alluring possibility to obtain idealized life. Austin also expresses his dissatisfaction towards his current life situations towards the end of scene eight. Austin has finally confesses, There’s nothing real down here me. There never wasThere’s nothing really down here, Lee! Least of all me (58-59). Austin falsely realizes that he could go to true West and live a better life that he truly desires causing him to see all the negativity in his current life, leaving him to forever misguided by the unobtainable true West. Both Lee and Austin fall for the trap of the illusion of potential success

The True West Play About Dreams and Aspirations. (2019, Aug 20). Retrieved from https://studymoose.com/the-true-west-play-about-dreams-and-aspirations-essay 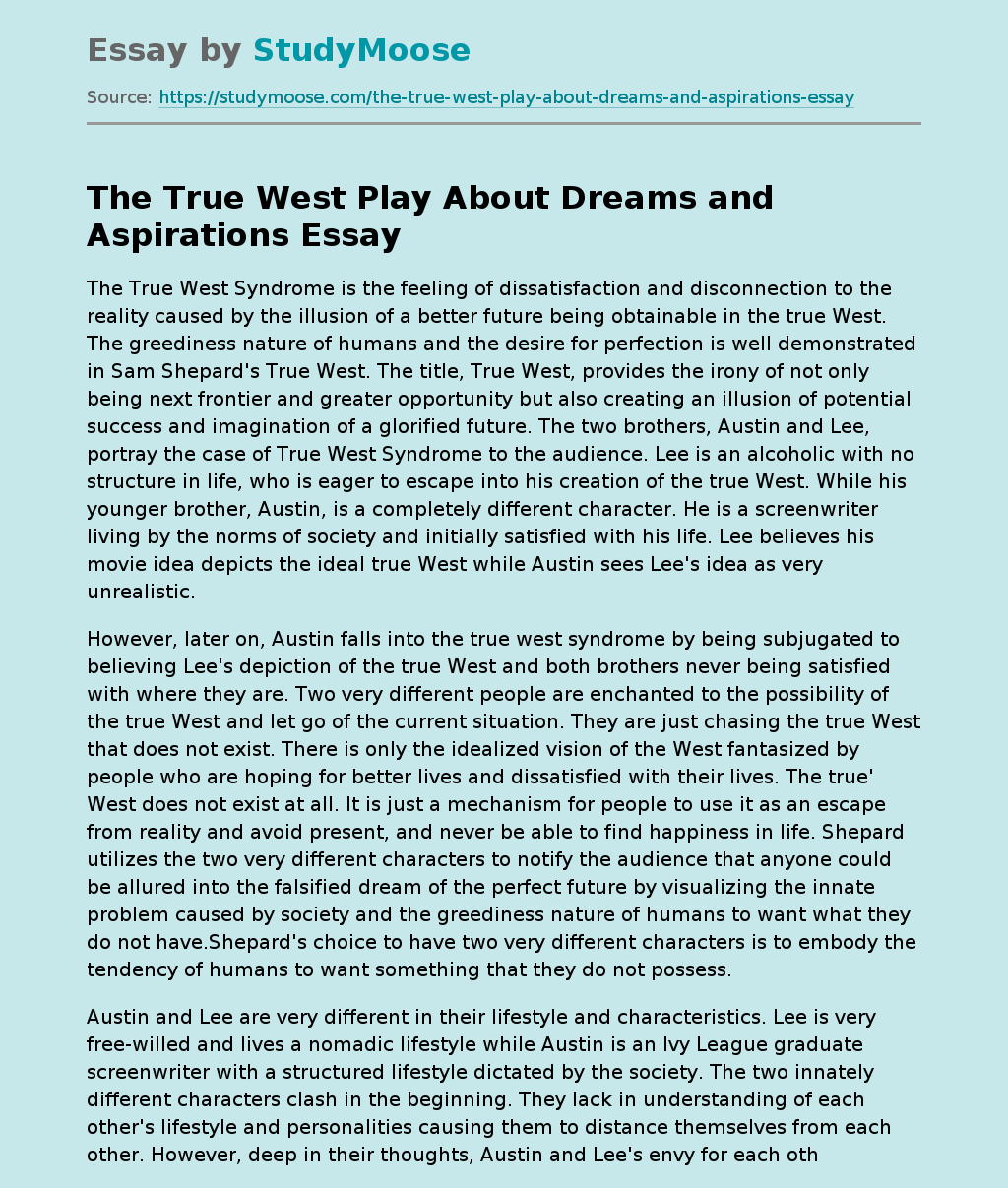