The Symbol of Desert in True West by Sam Shepard

True West is a classic of Sam Shepard written in 1981. On the surface, it is mostly about a sibling rivalry of two brothers though there is more to it than that. The comedy, which to some is not very funny, seems to follow the regular standards of plays. The construction of the basic dialogue manages to convey important things about American culture and the way we have been acquaint to automatically assume a defensive posture in the face of our own limitations (Burke, 2000).

Don't use plagiarized sources. Get your custom essay on
“ The Symbol of Desert in True West by Sam Shepard ”
Get custom paper
NEW! smart matching with writer

Shepard himself and his characters appear to be in pursuit of these three distinctive features: the need to portray a particular role, the need to evaluate genuineness of the role and its milieu, and lastly, a struggle with poor outcomes. Dissatisfaction and indecision often leads to rejection of the role, amendment of the experience into a different character.

The story is timeless even now. Shepard seems to have been able to predict how today will become. It is able to expose the absurdities not just of human nature but also of the modern world.

Shepard seems to have seen it coming. The time when people are simply dictated by technology and the way we think simply dictated by motion pictures and time such as now that we can never really distinguish fact from fiction, resulting to our loosing touch of our own selves.

What happens when we can no longer recognize truth from lies? Between the lines delivered by the characters are the questions as such. Expressing angst against the world and trying in vain to keep in touch with a reality that is fading, knowing that with the loss of recognizing reality is the loss of being real yourself.

What will happen to our society then?

It is a story of two brothers, Austin and Lee, who has opposing characters that can only lead to conflict. He hates motels because he says they are so lonely giving the impression of an introverted and sophisticated character. Lee, on the other hand is a rough, seemingly extroverted individual who drinks a lot, talks foul and goes beyond the limits.

They have not seen each other in five years when they met in their mother’s home who is currently vacationing in Alaska and Austin is working on a script watching the house for her. Lee arrived from a pit-bull fight unexpected. By nature, Austin and Lee are territorial creatures, almost like animals protecting their own. Lee is the intellectual who scorns his brother’s unpolished character and Austin is simply a drifter who gives no respect to society’s dictates.

It turns out that Lee is a crook and is planning to box the neighborhood for something to steal while Austin just wanted solitude to be able to work on his screenplay. The two brothers with crashing personalities simply do not get along, and their invisible father is an alcoholic who is in a desert somewhere.

The brutality with which they fight is extreme, with almost unbelievable extent. The violence is simply self-directed, as they both try to vent it out on the other. When Austin notched against Lee about his father losing his false teeth, we can see that even with cruelty, there is an irregular but excruciatingly undergone emotion (Burke, 2000). It was news to Lee since he was supposed to be the one close to their father and he felt let down. (Beers)

To add to the already crazy set up is the appearance of Saul Kammer who is a tasteless Hollywood producer, giving way to unrealistic twists in the story. A bet on a golf game between Austin and Saul gave Saul the upper hand in telling Lee to help his brother write a screenplay. Reversing the positions of the brothers, they both try to fit into the characters that are simply not theirs. Though unseen, the influence of their alcoholic father is hugely felt. Lee hopes to rescue their father from doom even though the guy he was able to find for that is simply not apt for the job.

The production itself is very tedious and detailed in itself. The lightning and the way the stage was prepared gives an attractive but insinuative impressions. The way the stage was set for the indoors gave an elegant dimness suggestive of extreme emotions. Solemn moods gave way to extreme anger when the brothers started throwing things at each other.

In his own notes to potential directors, Shepard even denoted that there are not to be any dramaturgical actions or idea for the motif of the set or the costumes. Any such endeavors would only puzzle the character’s progress. (Sparknotes, 2006)

Common restlessness, the continuous drive for more, urban-based dreams, family breakdown, the lack of relation to the land are all a part of the play. The significance of the desert and the characters mother’s house is a reflection of people and the circumstances they find themselves in. People are somehow confined to spaces and limited choices as symbolized by the use of indoors. The cruelty by which people are capable of when things just turn out to be too suffocating is just reality.

With the use of indoors, Shepard was able to convey the lack of choices and sense of imprisonment. The use of the desert gives out the impression of freedom. It is giving people with a sense of being able to do just about anything, later on realizing that with too much freedom, you loose your sense of destination, even belonging. You are given with space, time to realize and analyze the different facets of your own person. True West suggests three main ideas. It states that the human nature is twofold. It also shows the difference between creative processes and reasoning and the senses. Lastly, it shows the reality behind the life in the west (Burke, 2000).

Shepard expresses these ideas into the personalities of the two brothers (Burke, 2000). Even though they are poles apart, still no one wins. Austin’s dream is seen to be mediocre and his task seemed to be short-termed while Lee is like a wanderer, very outgoing, and lives an adventurous lifestyle. Austin is reality while Lee is imagination (Burke, 2000). Austin is imprisonment, Lee liberty. Austin is civilization while Lee is rural.

When counterfeit dreams turns into nightmares, when supposed developments are assumed to be progressive rather than the regressive development that it actually is, feeling the desire to escape commitments and closeness. The plaguing need for space without all the constraints and the desire to soar with no chains to hold you back is simply driving and then, realizing that the physical and psychological space is being destroyed.

Both characters had gone through a lot to be able to accept either the hard facts of life in the desert, or the soft truth of the suburban underbelly. They want a little of it but they can not take it as a way of living, both secretly dreaming to have the other’s life. Lee wishing he had the chance to be able to roam free and Austin wishing that he could have the sophisticated life that Lee leads, hating each other’s guts in the end.

Who has the beat of time? Every once in a while, Lee recalls Austin as he shoutsI drive on the freeway every day. I swallow the smog. I watch the news in color. I shop in the Safeway. I’m the one who’s in touch. Not him.” Later he adds, “There’s no such thing as the West anymore! (Burke, 2000) It’s a dead issue.” Lee though a macho outcast surprisingly plays a mean game of golf and Austin has got coyote wildness.

Commitments in a family start at the moment a person is born. Some people consider it as a curse and many of them consider getting out of it as their extreme but hopeless goal. The father is like a “behind-the-scene” character but its role is very important being the person who influences the lives of the brothers (Sparknotes, 2006)

In the end, they are left with the remnants and possibilities of what could happen. Both of them do not know their destination. “I wanted to write a play about double nature,” Shepard said (Burke, 2000). “I wanted to give a taste of what it feels like to be two-sided. Shepard was able to convey the two sides of not just the brothers but the multi-dimensional facets that are very much a part of life. People are really weird and with unrealities of the play, it was able to give off the impression of confusion, choices, freedom and confinement.

The desert is a symbol for the untamed, and a house a symbol for stability and predictability. But the desert is also a symbol for the truth, not tainted with supposed civilization that seems to control our lives today. Today is the information age when people simply have to rely on the media much worse than when Shepard wrote his play. Yet, it is still so true even now. Man of today can no longer recognize progressive development from regressive development. Nor can he roam free now as you could have before, because the dictates of society will not let you have what you want. Media controls the way we think, manipulating people with the information they give.

Society is the greatest constraint. Culture is always changing and with all the superficial things that go on around us are the unrealities of it all. Realizing who we really are is more of a task. In the end, we can only go with flow.

The Symbol of Desert in True West by Sam Shepard. (2017, Mar 02). Retrieved from http://studymoose.com/the-symbol-of-desert-in-true-west-by-sam-shepard-essay 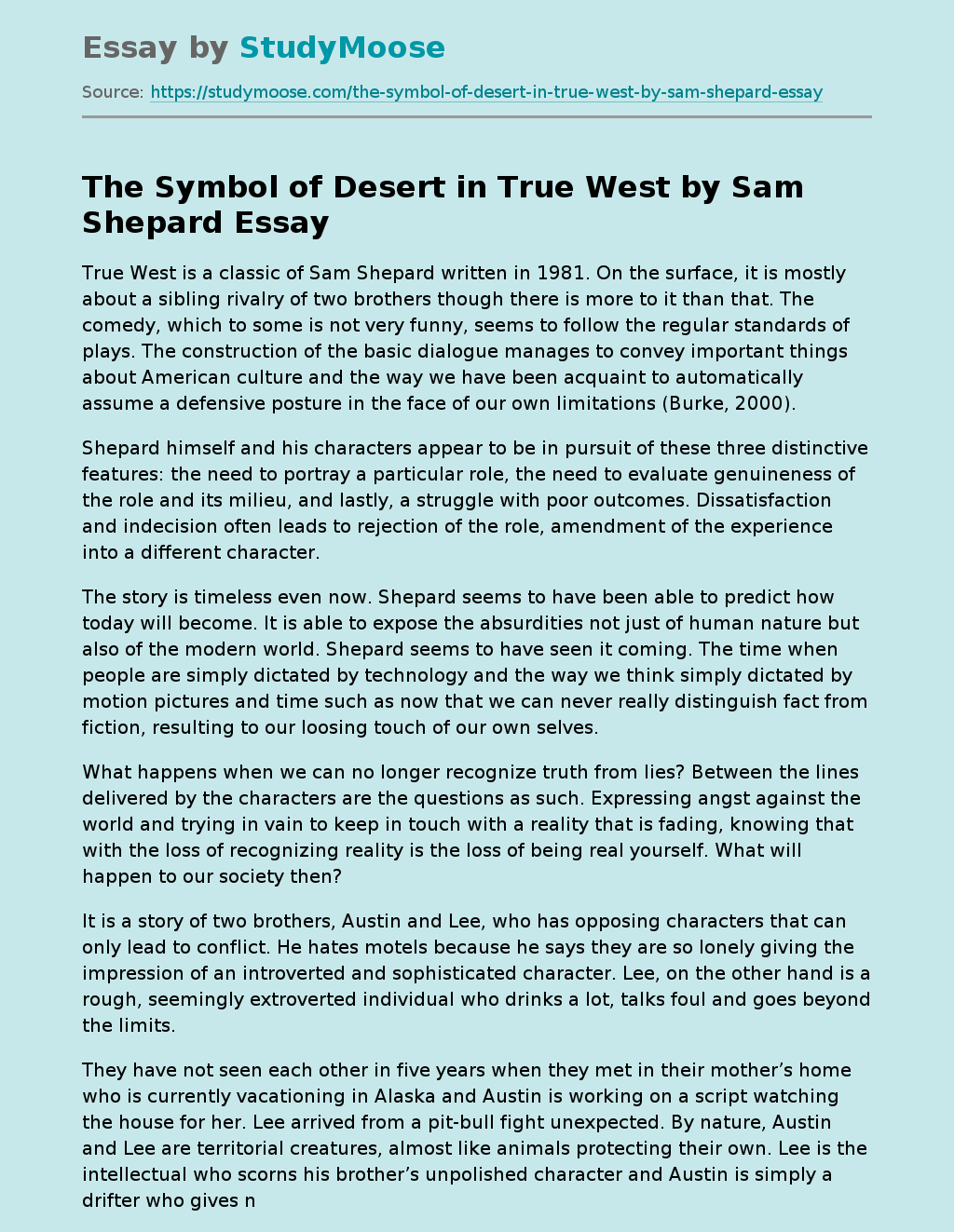