"I Am Sam" Film Analysis

Sam Dawson has the mental capacity of a 7-year-old. He works at a Starbucks and is obsessed with the Beatles. He has a daughter with a homeless woman; she abandons them as soon as they leave the hospital. He names his daughter Lucy Diamond (after the Beatles song), and raises her. But as she reaches age 7 herself, Sam’s limitations start to become a problem at school; she’s intentionally holding back to avoid looking smarter than him. The authorities take her away, and Sam shames high-priced lawyer Rita Harrison into taking his case pro bono.

Don't use plagiarized sources. Get your custom essay on
“ “I Am Sam” Film Analysis ”
Get custom paper
NEW! smart matching with writer

In the process, he teaches her a great deal about love, and whether it’s really all you need. What would you do once you find the one thing that you were created for? You may not want that thing, or you may totally love it, but once you are sure it was meant for you, wouldn’t you feel a certain possession of it, a certain knowledge that you have what it takes to excel in it? If you found your purpose in life, if you found the one thing that makes you feel you belong in this world, would you ever let it go? How far would you go to keep it, and for what cost would you ever give it up?

Nothing in this world is ever fair. And how can you even fight if you are Sam Dawson, mentally handicapped, almost never trusted, almost never loved, only humored once in a while by people who thought he was no good for them? What a very uphill battle just to have the right to live, what a seemingly pointless struggle. But it isn’t, and what is the point?

Sam was born, and he has to remain alive, and not just to exist and eat and sleep, no, but to live with the true quality of living. To be of use to the human race, bring forth something that no one else can ever give the world but him. To live his purpose so that when he ceases living it won’t be as if he has never lived at all.

Oh but he was given tools to use for the fight, uphill and unfair though it is. He had friends, real friends who understood friendship even if they understood little else, what with their own mental impairments. He had his daughter, Lucy Diamond, who was everything he could never be, but who gave him an extra something to fight for, passionately roam the world for. And above all he had his love. He had a certain understanding of life that “normal” people don’t have. He is staunch in telling the truth. Sam never lied. And he does not deny how different he is. But he also knows how great he can be. And he would die for his love, much like Archimedes died for his circles. And above all, he would live for it, he would live for origami paper walls and the daily routine of arranging Starbucks sweeteners by the color.

Lucy was lucky to have her father, as her father is lucky to have her. You can not look at her and not take back whatever judgement you passed on Sam when he made the “huge” mistake of sleeping with the homeless girl and got her pregnant. You can not listen to her refuse to speak or read out loud the word “different” in front of her Daddy without understanding the order of the world, how chaotic it seemed before and yet how truly good it looks now.

Sam and Lucy touched lives, those of Annie and the ambitious lawyer Rita and her son, and the foster parents who in their pride derived from their congruity with the norm the belief that they could be better parents, and a lot of others who were there in court and were there in the movie house watching them.

I don’t know if I would die for circles, or even live fighting in a custody case where you have so little chance of winning it. But I know that I don’t think Archimedes’ death was pointless. I don’t believe the years ahead of him were wasted, when he had lived every moment alive for the one reason why he was alive anyway. Who knows? Maybe it’s something that you see in the eyes of a little child when you’re holding her and telling yourself that this child is your own. You defy all. Some people have little passion, but what is it that they don’t see?

People look at your capacity to think. But Sam showed us in his struggle that ended in something we might label “unrealistic” and “incredible”, that all of us are retards in one way or another. And it showed me that sometimes it is your capacity to love that matters the most. Sometimes it is all it takes to win. Or keep living after you’ve lost.

You sail off a swing into the arms of he who loves you and he whom you love, and see an adamantine brilliance that so few in this world can provide.

One looks to the capacity to love, at being different and blaming nothing and nobody, at knowing truth and how it sets us free…

One looks at somebody’s eyes and says, “How complete, how splendidly made is the world.” 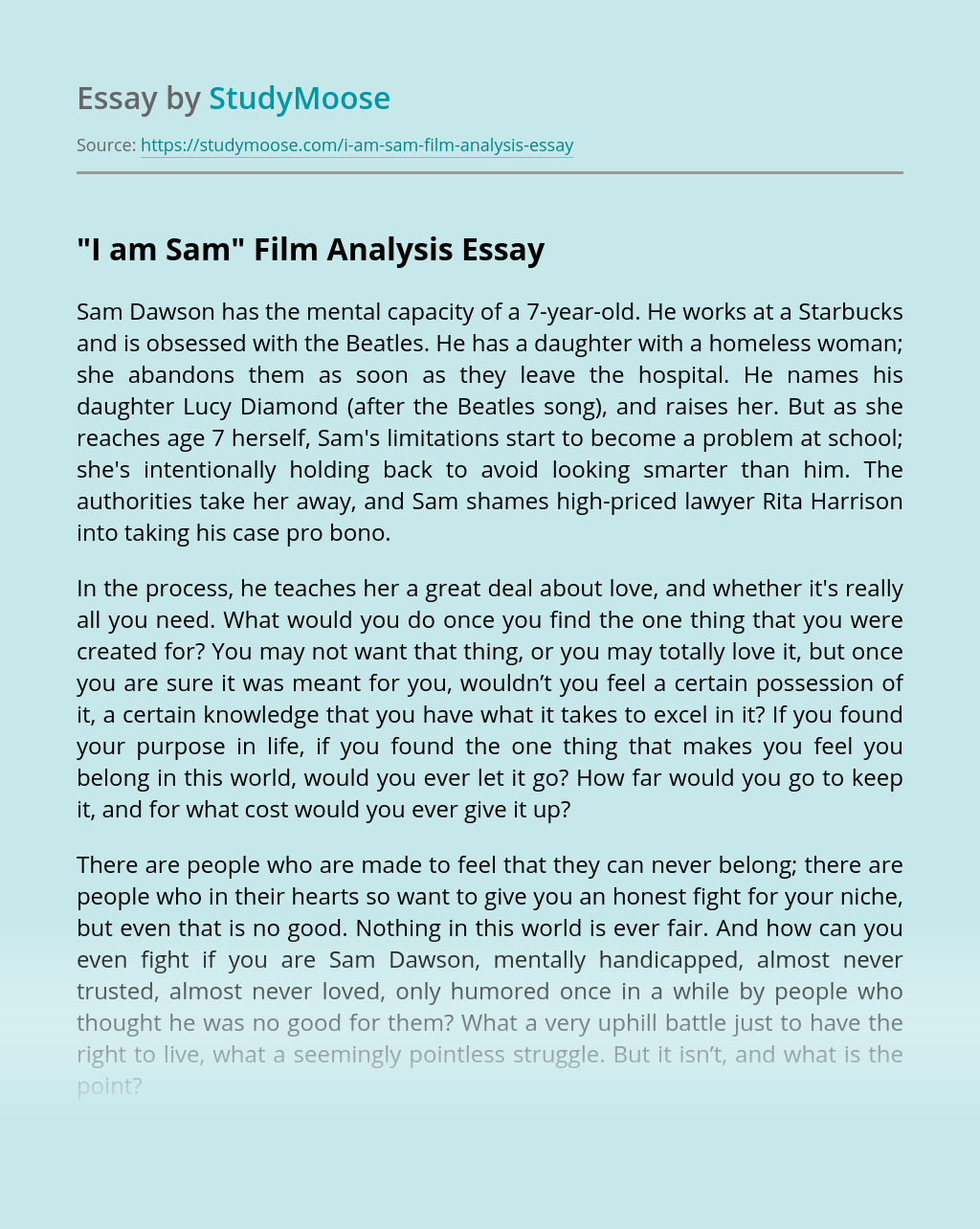