In the novel, a prominent theme consistently intertwined is that war leads to multitudes of deaths, many of which are seriously gruesome. Kids, adults, and everyone alike are amongst inevitable savagery. To make matters worse, the violence is even coming from both sides of the conflict, affecting those both in and out of the war. The whole book is more or less, based on the brutality of the Revolutionary War between the Continental and British armies. In My Brother Sam is Dead, Sam’s father, Mr.

Don't use plagiarized sources. Get your custom essay on
“ “My Brother Sam is Dead” Novel Analysis ”
Get custom paper
NEW! smart matching with writer

Meeker, is a Loyalist. In other words, he supports England and doesn’t want freedom for the colonies. Ironically on the other hand, Sam decides to join up with the Continental Army, opposingly fighting for the American colonies to be free from England.

The plot does not only present a rebellious and atrocious aspect to it, but the entire book itself seems to as well. Mr. Meeker retains some horrendous memories of the war and particular events that his dear acquaintances encountered.

He merely desires for Sam to realize that war isn’t just an abstract idea. It possesses real consequences, and from what Mr. Meeker has seen and delineates are, those consequences are solemnly heinous. There is a certain scenario expressing the acceptance of ultimate death as Sam retorts, ‘“There are principles involved, Tim. Either you live up to your principles or you don’t and maybe you have to take a chance on getting killed. Who wants to get killed? Nobody wants to get killed, Sam said.

But you should be willing to die for your principles’” (Collier 34-35). Without a doubt, Sam definitely believes in the Patriot cause. In fact, he is willing to have his life taken away for it, showcasing some serious, realistic dedication. Sam is the one specific character who all around embodies this theme as a whole. In this way, at the very beginning of his commitment in being with the army, he is wholeheartedly positive that he wants to fight for the colonies and against England.

If anything he only exults enthusiasm but also appears chipper about the war. He doesn’t seem to be the least concerned about the battles, cruelty, and death factor. However by the end of the book, Sam’s outlook on being a soldier has changed and this is the peak of what the theme has cultivated into. More specifically, Sam’s time as a soldier has definitely exposed him to some horrific experiences. Sam iterates fighting the British once the war’s been raging for a few years, explaining how it used to be that they had “beaten the British,” but now, he says they “kill Redcoats the way you butcher pigs.” Unquestionably, there is an eminent change, with Sam shivering as he definitely isn’t as optimistic as he used to be. Surprisingly even after confronting all these horrors of war, Sam still wants to maintain his position in the military, refusing to retire. His commitment to the war emphasizes a myriad of things, but it primarily expresses that from what he has viewed of the convention of society, his impulse supports him in being a part of the change.

In particular, the last and final chapter of My Brother Sam is Dead exquisitely presents the overall theme to its readers. Tim comprehends how cruel being apart of the military can be when “Colonel Read came up from the encampment with the word that General Putnam had refused to our plea for clemency” (Collier 199). Once again, the theme of this novel is that war is more gruesome and brutal than what it may seem like. Of all people, Tim definitely realizes this to its full extent, considering he spent weeks trying to persuade General Putnam to spare Sam’s life, but was rejected after all. Furthermore, Sam was as innocent as a lamb and only tried to serve right, but apparently, Putnam wasn’t one to show the littlest bit of pity towards anything. The theme is further revealed when Tim describes how Sam “… went on jerking with flames on his chest until another soldier shot him again. Then he stopped jerking” (Collier 208). The sight of experiencing one’s only and cherished brother would obviously be a bloodcurdling sight, and in this case, Tim was unfortunately left in the position. The theme is explained crucially since even though one might be a faultless, diligent person, their life can easily yet dreadfully be taken away for no good reason during war.

Although Sam performed not a single wrongdoing and grew to be such a kindhearted man, he was long gone from existence in the blink of an eye. Thus, it is demonstrated that this theme is divinely highlighted in chapter fourteen. 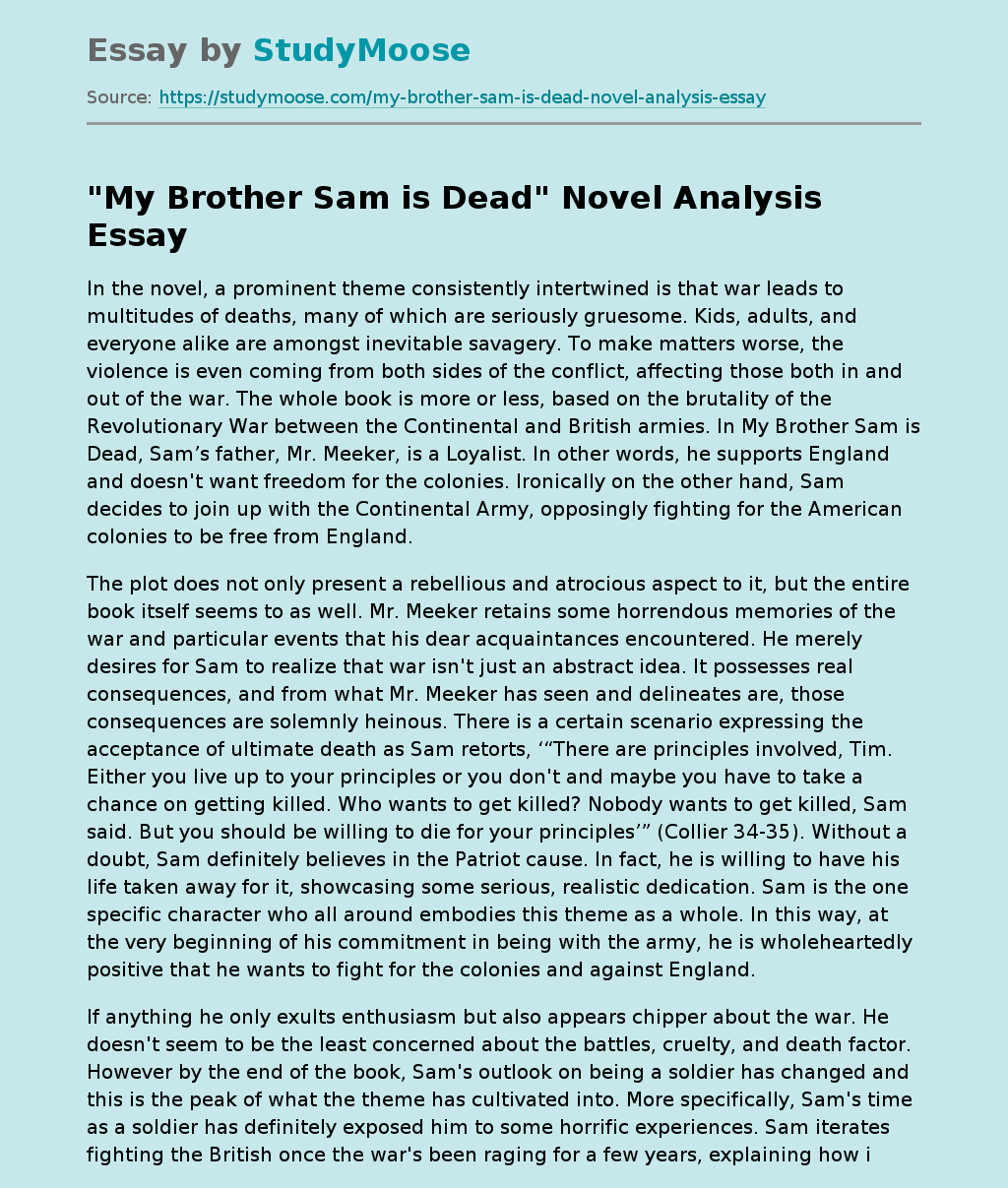