Someday This Pain Will Be Useful to You Novel Analysis

James Sveck, a sophisticated and vulnerable young man, has a deep appreciation of the world, but has no idea how to live in it. He dislikes social interaction, which in clear within Peter Cameron’s novel, Someday this pain will be useful to you. His parents’ divorce was finalized a long time ago but it has impacted James immensely. His relationship with the past directly affects his decisions and personality with the present, creating a novel that many can relate to.

Don't use plagiarized sources. Get your custom essay on
“ Someday This Pain Will Be Useful to You Novel Analysis ”
Get custom paper
NEW! smart matching with writer

James is a smart 18-year-old boy who is having a ton of problems finding his place in the world. He feels extremely lonely, yet has no real desire to reach out and make connections with people (with the exception of his grandmother). His family is broken. His parents are divorced and his mother, whom he lives with, is having a hard time finding love again.

His older sister is openly in a relationship with a married man (The divorce affected his sister as well).

Already James doesn’t have any good role models for love, which probably doesn’t help him pave his way into friendships and romance. This is especially true for his attempt to reach out to his crush, John Webster, by creating a fake online account. Obviously, he has no one to guide his way through relationships, as his mother and sister fail at their own relationships and his father isn’t close enough to James to establish a connection. Although the book is a first person narrative and you see the world through James’ eyes, it seems as though James doesn’t know himself, or he doesn’t want the reader to know about him.

Even the lack of romance in his life wasn’t spelled out to the reader until at least two other characters brought it up.

This fits the book, and his personality, perfectly because the reader is able to experience his lack of place in the world while also being restrained from knowing everything in his head. His reserved personality, caused by his parents’ divorce, is to blame. James has no experience with relationships, (even with the reader) so he pushes them away for the sake of keeping himself safe. The only person James truly connects with is his grandmother, she tries to give advice about the things that trouble James, but her advice is for a different generation and is irrelevant to James with the exception of one piece of advice. She said, “Someday this pain will be useful to you.

” This message his grandmother said was a catalyst to James’ outlook on life, although it wasn’t until much later when he realized it. He begins to believe that he is who he is because of experiences and the outcomes they
all produced and he starts to come to accept them. At that moment, James’ reached the top of Pavlov’s Hierarchy of needs, attaining self actualization and coming to terms with who he is. James’ grandmother’s word of wisdom indirectly helped him overcome the pain from his parents’ divorce. His Parents’ divorce did affect James’ personality, but in the end, the pain he endured from the past, eventually became the strength he needed to realize who he truly is and accept all his flaws. Which created a piece of writing, about a dysfunctional character trying to live in a world he didn’t fit in, into work of artistic literature.

Someday This Pain Will Be Useful to You Novel Analysis. (2016, Apr 12). Retrieved from http://studymoose.com/someday-this-pain-will-be-useful-to-you-novel-analysis-essay 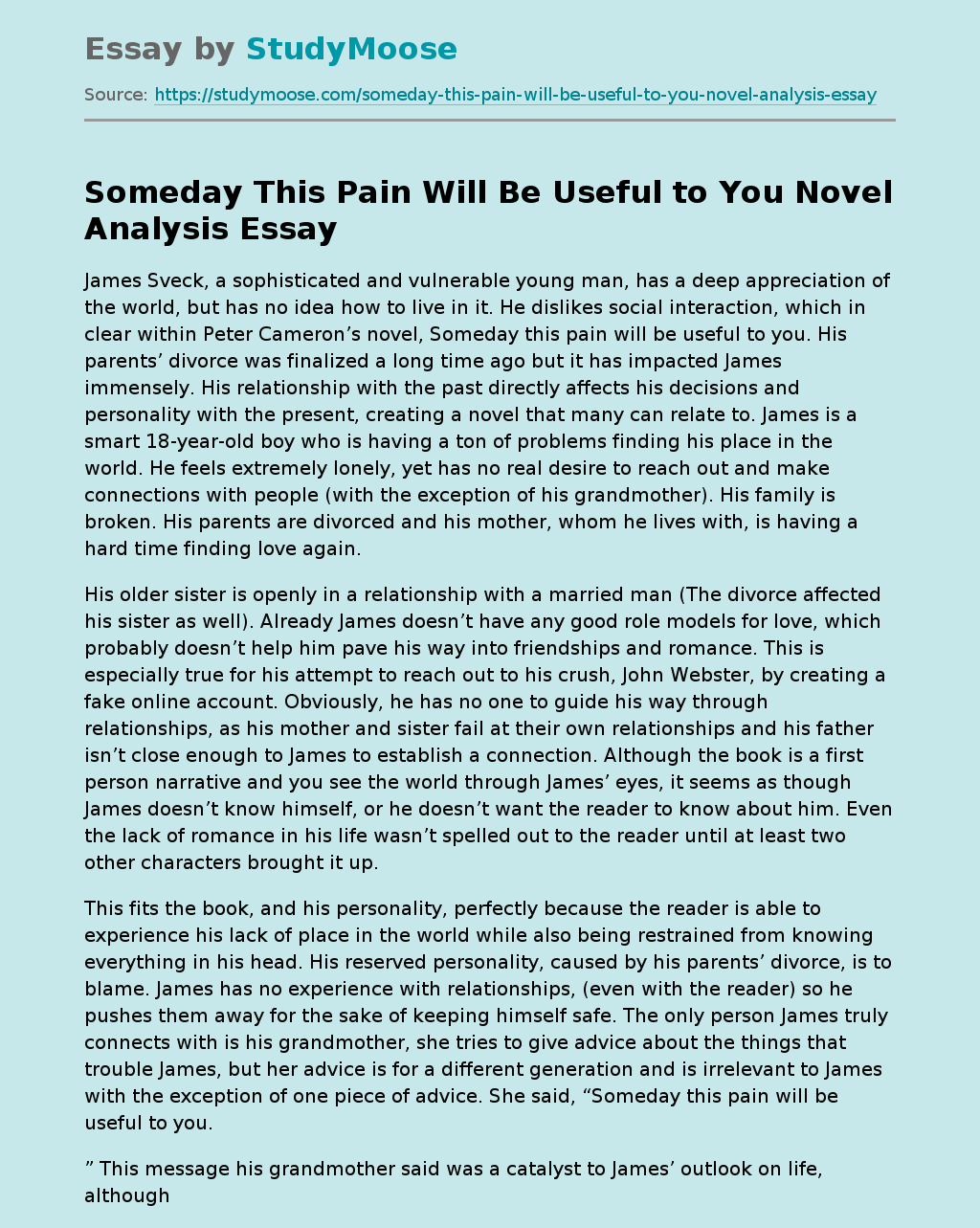